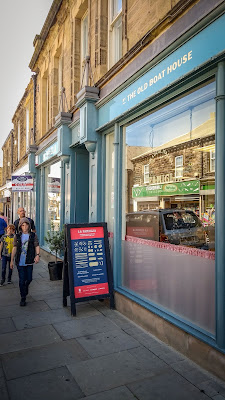 
Among the restaurant-going public it’s a longstanding belief that the words “home-made”, or any variation thereof, denote something good. Maybe that’s why they appear so frequently on menus. The sauce is always the “chef’s own”. Or the soup is “our chef's special recipe”. Yum.

At La Famiglia, in Amble, all the pasta is “handmade on the premises”. What then to make of the fact that, at least on the cheerily bright lunchtime of our visit, it wasn’t very good?


It’s a tricky one. As a general rule, I applaud and encourage anyone in a restaurant who elects to make their own things rather than buying them in. To do so is to assume responsibility and take control; to say: “I’ve got this, I can do it better than the guy with the delivery van”. On a slightly more pretentious level, it is, as Michael Pollan wrote in ‘Cooked’, a vote “against specialization — against the total rationalization of life. Against the infiltration of commercial interests into every last cranny of our lives”. Yep.

But, as anyone who has ever been invited to a dinner party knows only too well, the importance of the words “home-made” rests entirely on two questions: whose home? and who’s doing the making? 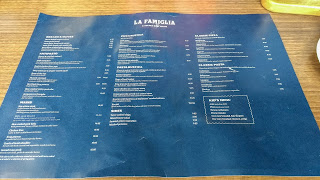 So let’s get back to La Famiglia and, more specifically, to an enormous bowl of their “ravioli of the day”. We were looking forward to what sounded like a rather Northeastern take on Italian pasta, described by the specials board as having a smoked haddock filling and a mussel, clam, samphire and cream sauce. Good ravioli are beautiful things, thin enough for the filling to hint at itself through the pasta. 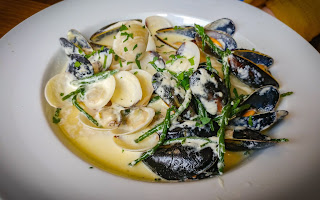 I doubt if I’ve ever happened upon thicker, denser, stodgier or chewier specimen than the one I stole from Mrs Diner. These moribund spheres were hiding in shame under a vast trough of cream. We ignored the ravioli entirely and picked at the shellfish and samphire which were all rather nice, but when I’m paying nearly fourteen quid for a bowl of pasta, the main ingredient needs to be edible. 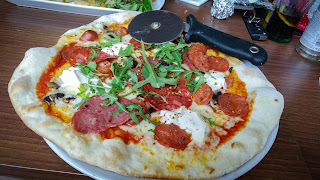 They also make their own pizza dough at La Famiglia. Like the pasta, it just wasn’t good at all: pale as a the average Brit abroad on the first day of the summer hols, and similarly lacking in taste, character or attractiveness. I had ordered the Picante, which featured various spicy meats, the net effect of which, along with hearty dods of mascarpone, was all a bit sickly. 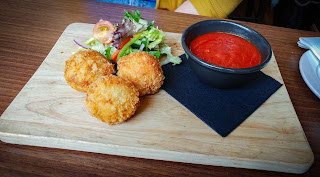 Starters had been better, although really not by much. Cod arancini were suitably crisp on the outside but featured an inner core that was just odd. I couldn’t detect the texture of rice at all, so asked if they had been made with some other starch. No, rice it was, apparently. If so, they must have cooked it to oblivion. Their “spicy arrabiata sauce” wasn’t a disaster but certainly wasn’t spicy. It needed pepping up with more seasoning, or lemon juice, or something. 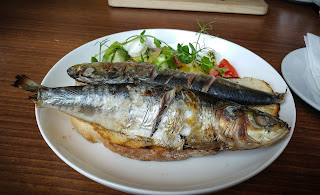 My sardines on toast had been exactly that: two whole, enormous, grilled specimens perched on a doorstop of fine toast. They certainly looked the part. However, maybe they weren’t bang fresh, for the fish were rather dry and devoid of all those lovely oils that make them one of the most nutritious things it is possible for a human to consume, despite all those little bones. The accompanying salad of “heritage” tomatoes and little baubles of mozzarella had almost no flavour whatsoever. At this time of year, tastier toms are available at pretty much any supermarket. 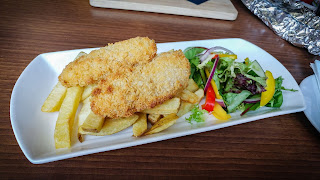 Dish of the day probably goes to the home-made (there it is again!) fish fingers from the kids menu, consumed enthusiastically by Junior Diner. Less so their pointless (for a child) salad garnish of undressed leaves and raw peppers. 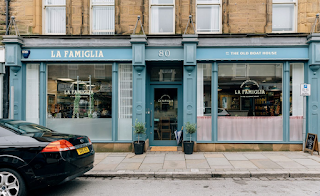 The restaurant itself is a dinky little thing, prettily done out in pastel shades of greeny-blues and creams. Bare wood tables and chairs are fairly crammed in. It feels like it may have been a café in a previous life. 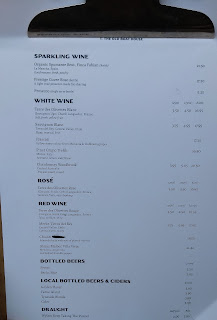 Six wines were available by the glass. They hailed from France, Chile and Australia; in a supposedly Italian restaurant, what is that all about? Vintages were unlisted, unsurprisingly given the lack of attention to detail everywhere else. 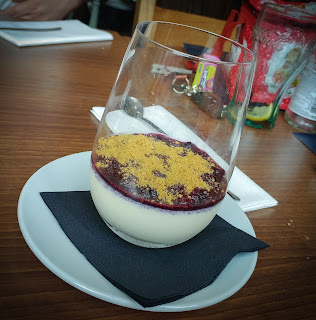 I stuck to the Fentimans, with which I washed down the one dessert we shared, an alright-ish panna cotta served meekly in a glass (turn it out man, have some courage!) with some dark fruit compote on top.

Service was of the smiley and friendly variety that makes you feel bad about the uncomplimentary things you will later be saying about their food. Sorry. But say them I must, for this was the type of jarringly poor lunch that puts a fly in the ointment of the general “food is getting better round here” narrative.

I’ve enjoyed far, far better meals before from The Old Boat House group of restaurants although admittedly that was when chef Richard Sim was still involved. 'Homemade' might be better most of the time in most places, but on this occasion, in this place, I’m afraid I’d rather someone had opened a packet.