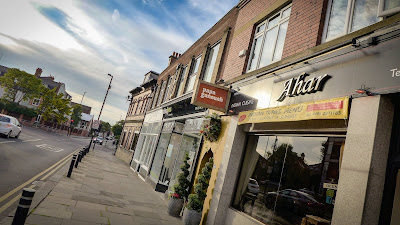 
The move from street food operation to a bricks and mortar restaurant must be absolutely fraught.

Making a few informal dishes from the limited confines of a truck or tent is comparatively easy compared to coming up with a whole menu, and then cooking it consistently. You quickly know what works when you get an instant response from a hungry crowd outside your van; it’s harder to get feedback from a bunch of hired staff. Now you have to do HR, and find premises with non-crippling rents. And buy plates, and tables and cookers and stuff. And figure out your order of service and your supplier network. Maybe better just stick with the street food thing after all, eh? It is festival season after all. Restaurant next year. Maybe.

So all credit to those brave souls, like Papa Ganoush, who have rolled the dice and taken that plunge. I had always been impressed by their falafel, zingy salads and sauces, all piled into steaming fresh flatbreads at Jesmond Food Market or down on the Sunday Quayside Market. But a restaurant cannot just serve up wraps: what else would be on the menu?


The place seemed to take an age to open up, and some early feedback featured mutterings about dodgy booking systems and unanswered phones. I gave it a few weeks, then booked in on a Friday night, hoping to be able to say nice things, but mentally prepared to witness a “challenging” service.

We ordered enthusiastically, then waited. We waited for quite a while in fact, of which more later. But then the food turned up and everything was just riotously delicious and we relaxed into one of the most enjoyable meals of the year. 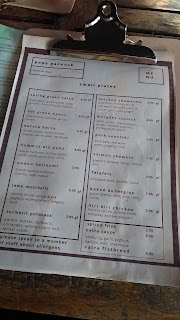 I think the menu has expanded a bit since early versions I saw on Facebook, and they’ve also gone for a small-plates format, rather than the main courses they were serving on opening, which makes sense to me; this is the type of food, full of herbs, mellow spicing, freshness and zest, that works perfectly as mezze. I wanted to try pretty much everything. 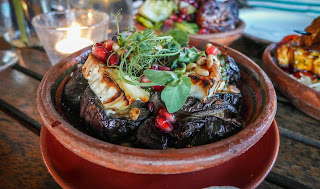 Vegetarians in particular will find much joy. Aubergines had been baked to the point of sighing collapse, freshened with mint and pomegranate, sweetened with honey and made rich with melty goats cheese. 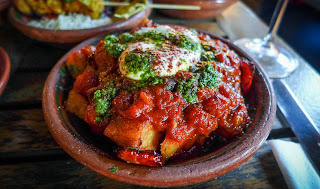 Their take on the Lebanese staple batata harra - or, somewhat less romantically, spicy potatoes - was bangingly good, served with a triptych of sauces. The spiced tomato effort was pleasingly complex, the aioli had real garlic thump and a smear of blitzed coriander lent the whole project some emerald virtue. 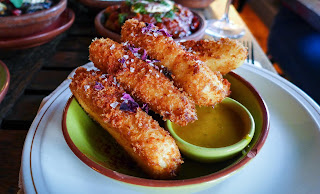 This attention to detail, and sense of balance, was just as evident elsewhere. Fingers of panko-crumbed halloumi were prettied up with a scatter of dried pink rose petals and served with a fruity, tangy sauce made from mangoes and vinegar called amba, the ubiquitous squeaky cheese thus given a new lease of life. 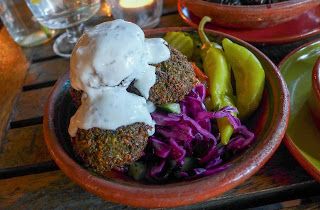 And the falafel were as good as ever, fresh herb-flecked dods of loveliness served with a soothing, nutty tahini sauce and vibrant crunchy pickles. 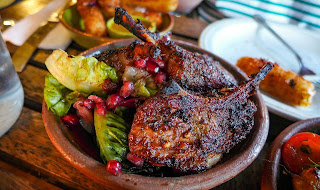 It was, however, the meat dishes, and in particular a plate of lamb chops that stopped us in our tracks and shut us up, save for the occasional softly murmured profanity. Lord, they were good. I’m guessing the menu had them as “merguez cutlets” because they used the same spectrum of spices as those wonderful brick-red sausages of the same name. A crust that tasted of fire and char gave way to perfectly pink, slightly gamey innards, their juices dripping over a slowly wilting duvet of lettuce leaves. You need to order these.

Both the small bar area and the cosy dining room are done out with the same sense of taste as the food. Bare woods, stark paint jobs with blasts of colour here and there and a generous smattering of tea lights were the order of the day. Everything was warmth and homeliness; it felt a bit like we’d been parachuted into a dinner party given by friends, the ones who really know how to cook and decorate a room.

It was a lovely place to spend the evening, which is just as well given the one criticism of any substance. It took about 45 minutes for us get any food at all, at which point we got all of it at once. 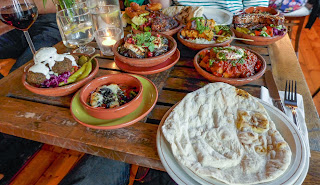 If they want to send a whole table’s order together rather than dispatch dishes as they’re ready then that’s their business, but I always think a simple way to judge an order of service is whether I’ve had anything to eat within fifteen minutes of sitting down. It doesn’t have to be much; just some nuts, or perhaps a toasted, ripped flatbread with some sauce, but I tend to arrive at dinner already hungry and primed to be fed. By the time this food arrived, I was starving. 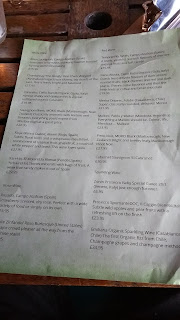 Other than the wait, service was lovely; charming, enthusiastic and engagingly well informed. Sadly only one wine from a short list was available by the glass, but at least it was a straightforward and youthful Tempranillo from La Mancha, which went well with everything. 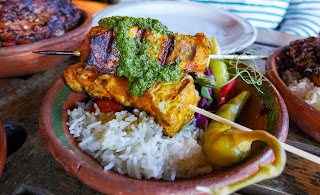 With no desserts available on the night of our visit we rounded out our evening with plates of oregano-heavy pork souvlaki and yoghurt-marinated salmon skewers. They were, predictably, great. Portions are generous for what you pay; we took home enough for the next day’s lunch. 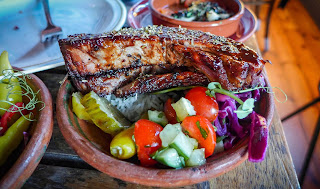 On the face of it, the food at Papa Ganoush is not complex. It’s a love letter to the flavours of the southern Mediterranean, written by Tom and Tim, a father and son double act. But everything was done with such care, attention to detail, focus on flavour and precise cooking that I couldn’t pick fault with any of it.

A simple test of any restaurant is to ask whether you’d like to go back. Yes please: as soon as possible. Five stars it is.