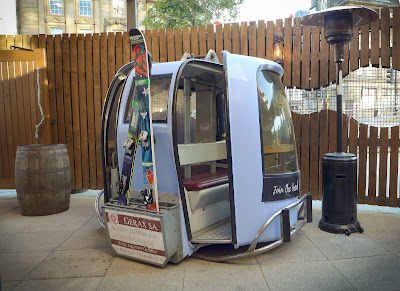 
In my world, there’s no such thing as a guilty pleasure. I refuse to feel remorse about eating anything I enjoy, though there are a few things I don’t feel especially proud about.

Naturally I’m all about the gourmet ice cream, but the Fab lolly, eaten in layers (brown, then white, then red, obviously), is pretty damn good too; in my time I have stolen more than one miniature Snickers bar from my child’s secret stash; and while meat-wise my preference is for well aged rib-eye or long braised ox cheek, I’ve been known to enjoy the odd Ikea meatball. Quite a few, actually, and that’s all down to the Aged Diner.


I was amazed when, many years ago, I discovered that Mum liked going to Ikea. There was no indication of Swedish influence in her home, which was entirely fitted out in brown furniture as antique as herself. Her glasses and crockery, other than the crystal and bone china kept for special visitors, appeared to have been acquired from a varied collection of pubs, motorway service areas and bring and buy stalls. But she seemed to know Ikea very well. After much interrogation, she admitted she only went for the meatballs.

I took her once, and had to endure the long, and necessarily very slow journey through all the bedroom displays, the kitchen equipment, the soft furnishings, right round the children’s section, until she finally reached the cafeteria. That’s when I tasted them for the first time, and also when I told her about the short cut by turning left instead of right at the entrance. She was amazed; and so was I.

Back home, she showed me her freezer, which was stashed full of the little things. From that moment on she assumed they were my favourite treat, and I’ve endured (and secretly quite enjoyed) them ever since, especially smothered with homemade arrabbiata. 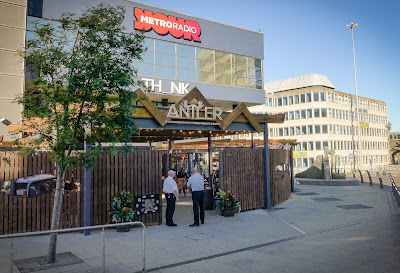 Which brings us to this curious “Alpine” themed meal, consumed in the middle of the Swan House roundabout, during one of the more successful moments of England’s World Cup campaign, in full view of an empty ski-lift gondola. That makes it sound like Mrs Diner and I had been on weapons-grade hallucinogens, but no, it really happened. And the reason for all this preamble is that we were served a bowl of 'Bavarian-style' meatballs that were a very convincing facsimile of Sweden’s favourite export since ABBA. 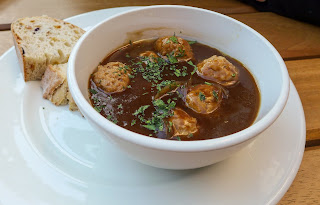 They had that strange but compelling squidgy, spongy texture, as if having been already partly digested, and came in a gravy that was oniony and gloopy in a way that set off all sorts of nostalgia for bad Sunday dinners down the ages.

The problem with subjectivity is that it is, well, subjective. While I found these bouncy little orbs to be fun, Mrs Diner thought them rank, which was a shame as she was the one who had ordered them. 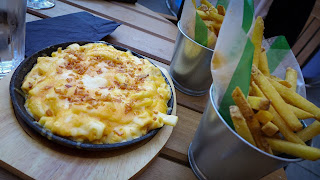 A number of the other dishes we tried were similarly triggering, in a good/bad sort of way. Their take on Mac & Cheese was complete and utter filth, the pasta cooked until floppy and doused in a sauce that tasted like hot Primula. I offer this description neither as praise nor as criticism, but just so that you’ll know what to expect. Once again, it found more favour with me than Mrs Diner. We are all the prisoners of our own past experience, and hers clearly doesn’t contain as much squeezy cheese as mine.

For once Mrs Diner wasn’t having a terribly good time of it. Having been banished to the outside seats in order to hear ourselves, due to the soccerball happening on a big screen, and served dud meatballs, they then managed to get her main course wrong, serving her Jagerschnitzel Gypsy-style rather than Hunter-style. This was rectified soon enough, but in any case I doubt that any self respecting gypsy or hunter would be happy about having either of these dishes credited to them. 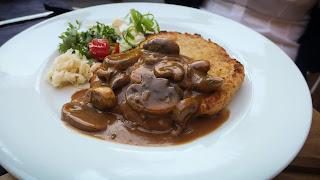 Apart from the fact that it was made from chicken (at least, I’m pretty sure it was chicken) rather than the more proper pork, the whole business was on the dry side, the meat hadn’t been pounded thinly enough and the crumb wasn’t sufficiently crisp. Only the mushroom sauce was decent. 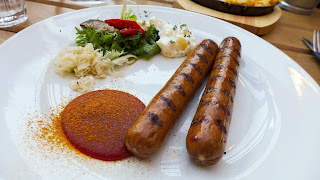 Intent on reliving a recent trip to Berlin, and also in the interest of being able to amuse myself with terrible puns (“what’s the wurst that could happen?!” etc), I ordered the currywurst. The sausages they’re using are not too bad, featuring that slightly processed texture common among Germanic pork products but nonetheless meaty and satisfying. I prefer it when the curry powder is mixed into the ketchup, rather than merely dusted over it, but hey ho. Thumbs up for some crisp, rustly chips, but thumbs down for a piddly little garnish involving nowhere near enough potato salad or sauerkraut. German food is meant to be hearty, and these are not expensive ingredients. 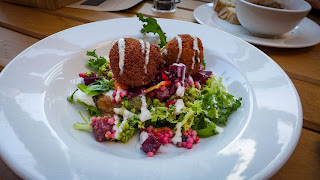 Amongst all this questionably cooked but comforting infantilism, one dish stood out and allowed this place to scrape a second star (but only just). My starter of ham and cheese fritters came on a generous salad that was fresh, varied, nicely seasoned and quite delicious. Beetroot, aubergine, some sort of couscous and bitter leaves were all brought together by a cream dressing. Somebody in the kitchen clearly knows how to put a tasty salad together, which made much of the rest of what we ate all the more puzzling. 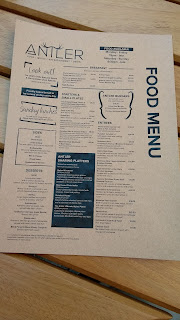 I’d like to be able to tell you about their Rumtopf, Apfelkuchen or perhaps even the Kösekuchen, but if you’re interested you’ll need to seek them out yourself. To do so will require a very early reservation: we arrived on time for our booking at 7pm and wanted to order dessert at around 8:45pm, at which point we were advised that the kitchen was closed. This, from a venue claiming to be a restaurant that, you know, serves food and stuff, is bizarre and completely unacceptable. I can’t recall this happening anywhere else, ever. Perhaps this is what their website means by the phrase “Experience like no other”?

Service, other than the mix-up over Mrs Diner’s main course, was absolutely lovely, the gent who attended to our outside table being especially friendly, and super-apologetic about the zero-pud situation. The wines we tried by the glass were unmemorable, and the wine list obviously did not list vintages.

We retired to Alvinos for a bracingly good espresso and reflected on an odd meal. If you want to eat baby food while sat in the middle of a massive roundabout, staring at a ski-lift, this is unquestionably the place for you.

In fairness, the interior has been done out rather nicely, with blonde woods being the order of the day, and it’s not their fault that the footy was on. I’m sure it makes a lot of financial sense to have turned what used to be the bar section of Fat Buddha into another, differentiated food offering, but I didn’t think much of the cooking. Even when, for reasons of nostalgia or irony, I sort of liked it.