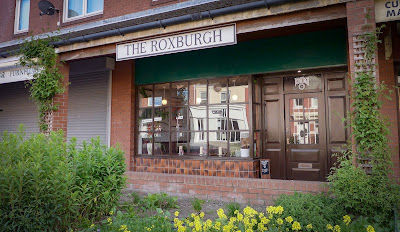 
What’s happened to Whitley Bay? It’s fast turning into a food and drink paradise: Hinnies, Nord, Papa Ganoush, Left Luggage Room, Elder and Wolf, Storm Cellar, Omni, the new Spanish City – where have I missed? Every time I visit the town, or a Metro stop either side of it, there seems to be somewhere new and good.

I’m sure locals would give a shrug of their collective shoulder at this; they know just fine what they’ve got, thanks. But for anyone not from the area, with hazy recollections of Whitley Bay’s grim, stag-frenzied past, this new state of affairs is nothing short of miraculous.

As far as I know, the upward trend all began with this little place: The Roxburgh. I had a great brunch here when it first opened at the beginning of 2015. My review began with the understatement: “It’s not exactly our region’s culinary capital”. I couldn’t really understand why a chef of Gary Dall’s skills and pedigree had chosen to open his first restaurant here. This chef from Wallsend had worked under Laybourne, and in Sydney, and used to be the private chef of touring rock bands. Why a tiny dining room in Whitley Bay?


“It has a lot of people who like to eat out and have nowhere to go,” Gary told me. Boy was he right. The return trip was long overdue. 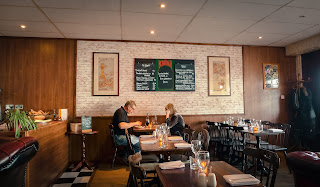 Last year The Roxburgh transformed itself from a high quality, dog-friendly, daytime café (‘No, we don’t have a wifi – we have a conversation), into a BYO evening restaurant opening Thursday to Saturday, and also on Saturday and Sunday brunchtimes. The menu, scrawled onto a chalkboard on one of the walls, is terse but gutsy, and exciting, like a good short story. There are just three options for each course if you discount the Lindisfarne oysters. If you consider yourself one of life's omnivores, and would rather spend the evening eating than fretting over what to eat, you will be very happy here. 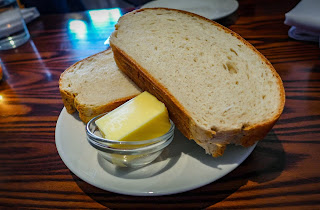 We certainly were: having uncorked a nice bottle of BYO champers and tamed the sharper edges of our hunger on some fine doorsteps of homemade white bread - none of your poncey sourdough here, mate – our starters arrived. Both were hymns of praise to fine ingredients, cooked with much skill but little fuss. 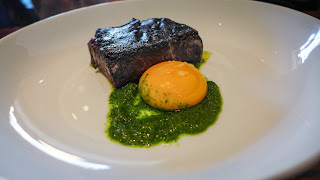 Mrs Diner’s black pudding reminded me of how much I had enjoyed it as breakfast here previously. Now, a beautifully soft cuboid of almost treacle-rich pigginess, it came with a confit egg yolk and a sauce of - I think - wild garlic, to provide a necessary green counterpoint to the animal thrum. 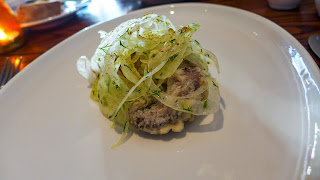 My tempura octopus was a far less butch affair, a single tender tentacle of the beast being presented in a frilly lace coating of fine batter, then topped with all the fennels: mandolined bulb florence funnel, spun through with the fronds and even a purée of the stuff. Clever, light, and enormously enjoyable. 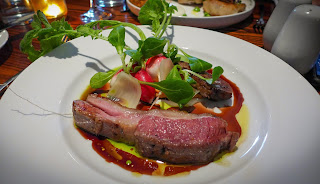 Main courses were more complex, but no less delicious, bringing together raw, preserved and variously cooked elements with skill and good sense. My lamb dish comprised a slab of sirloin, the fat crisped but the innards almost gorily pink, and a piece of fabulously tasty tongue. The whole business was seasoned by the presence of smoked cod roe, and lightened by perky, peppery fresh radishes with their greenery still attached. This was a sheer pleasure to eat, contrasting textures and temperatures handled perfectly. 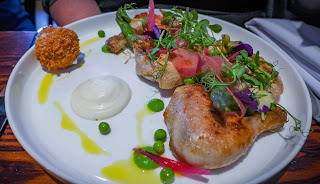 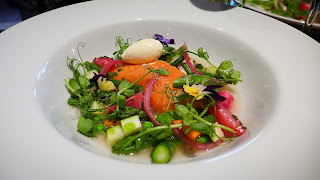 Similarly delicate was our friend’s main of confit trout which came swimming in a lovely broth and a veritable allotment of nubile young vegetables, with a quenelle of horseradish cream to provide some excitement.

Service, from the one very hospitable waitress, made it tremendously easy to enjoy ourselves. As indeed did the music, which was as inspired as the cooking. JJ Cale, Lee Dorsey, Link Wray and Sharon Van Etten were just some of our companions for the evening. I read an interview somewhere with Gary Dall where he said his reason for opening The Roxburgh was that there was nowhere else playing the Velvet Underground while serving bone marrow. Brilliant. 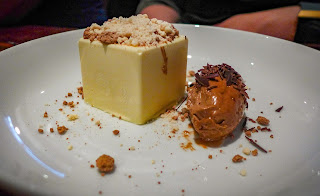 Indeed, there’s a certain sod-you iconoclasm to this place which I love, from the furnishings, which are very very much of the same vintage persuasion as a good deal of the music they play, to the naming of some dishes. For pudding we tucked into “Stoner’s Delight, vol. 1” which sounds like a Cypress Hill album but in fact comprised a white chocolate parfait, a milk chocolate mousse, and various crumbly bits and bobs. I was merely a bit sloshed on good booze by the time it came around, and not at all stoned, but was still delighted to make its acquaintance. 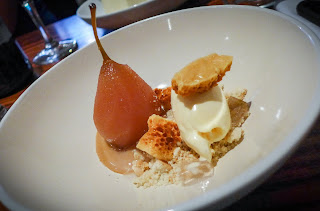 “The Vintage Honeypot” turned out to be an equally tasty poached pear effort with honeycomb. 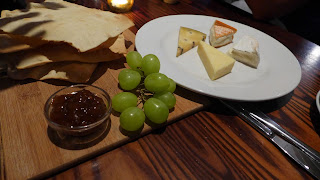 We finished with a plate of good cheeses, served with nice lavosh-style bread From the herbs and veg growing in the brick planter out the front, to the truncated menu, via the music, the BYO booze policy and just the sheer excellence of the cooking, I absolutely loved our evening at The Roxburgh.

Of all the many good places I mentioned at the top of this piece, this may well be my favourite. It’s exactly the kind of place that we need more of, run by a chef who, as far as I’m concerned, is doing God’s work. In Whitley Bay, anyway.