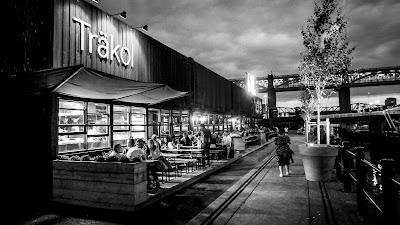 
Sometimes fortune really does favour the bold. When Rob Cameron and Dave Stone of Wylam Brewery/Bridge Tavern/Town Wall fame signed on the proverbial dotted line and agreed, at very short notice, to take on the project of planning a “shipping container village” underneath the Gateshead side of the Tyne Bridge, they couldn’t in their wildest dreams have expected a summer like this one. What a wall to wall scorchio, perfect for street food sampling, or just sitting outside with a lovely view and a nice beer. And pretty handy when you’ve just opened up a massive pub in the middle of it.

Except that to call ‘By The River Brew Co.’ a pub is a bit like referring to me as fussy; both are true, but also radical understatements.


The numbers that have visited the street food “HWKRMRKT” (yes, a bit of me died inside when typing that - when did vowels become hipster kryptonite?) are outrageous. I’ve heard that 14,000 showed up for the opening weekend, and over 10,000 came on several weekends since. Träkol, the proper sitting-down restaurant which is the subject of this review, was booked solid for the first four weeks of opening. But the thing is, even in an alternate reality where the weather had been guff, I reckon they’d have done fine, thanks to what is becoming a trademark habit for finding that sweet spot where quality meets accessibility.

Tony Renwick (who’s been executive chef of The Bridge Tavern since its glorious transformation in 2013, and was formerly sous chef at The Broad Chare) has written a gutsy and inventive menu, featuring descriptions of food as brusque and pithy poetry. I’m happy to give a free pass to gubbinsey phrases like “fiercely seasonal” in the blurb up top because of the words “Deep fried Reuben fritter” and “Grilled pork jowl, XO slaw” that appear just below it. Phwoar. 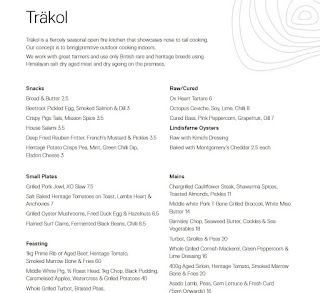 You can eat here how you like. There are small plates, snacks, mains, “raw” and “feasting” sections, the common denominator being that it all sounds like an awful lot of fun. 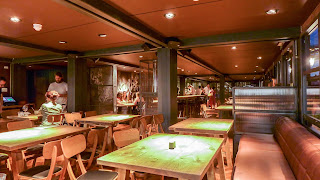 We negotiated a window seat (careful how you go, tables in the restaurant are pretty well squeezed together), ordered from the first-rate list of beers and ciders, and requested as much food as we thought we could possibly handle. Then we added another dish or two, just to be sure. 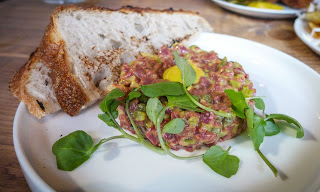 Not everything was brilliant, so let’s get the whingey bit out of the way first. Ox heart tartare was nice, but had been lubed up with rather too much mustard, making it tricky to discern the iron tang of raw beef. 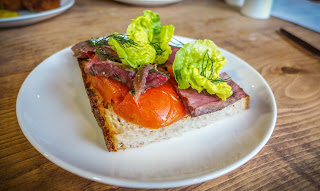 The lamb’s heart on a dish of heritage tomatoes on (very good) toast was similarly subdued... 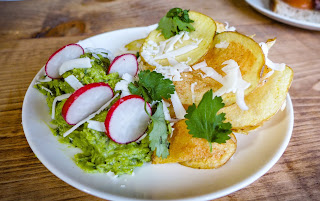 ...and some home-made Heritage potato crisps (with a pea, mint and green chilli dip and Elsdon cheese) had lost a bit of crunch somewhere between the fryer and the plate. 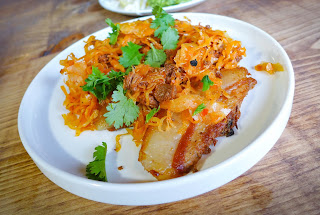 Elsewhere, however, fireworks were going off. That pork jowl was one of the finest things I’ve eaten this year; big strips of gloriously rich pig’s head, rendered and crisp in all the right places, with a pungent-fermenty slaw to cut through all that fat like a big spicy dagger. The overall effect was as if someone had sent a Germanic pork and sauerkraut dish on holiday to Hong Kong. Marvellous stuff. 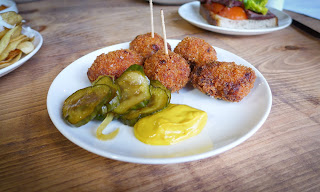 Reuben fritters were very good indeed, golden fried nuggets of salt beef, fine pickles and more mustard, but if they sound a bit decadent you need to see the Barnsley chop. 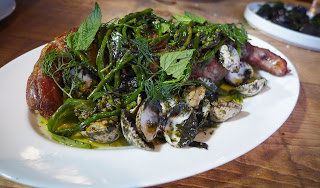 An enormous double chop of lamb, cooked over their wood pit (Träkol is Swedish for ‘charcoal’), then smothered in seaweed butter, samphire, cockles, fresh mint and fennel, this was an outrageous, daunting and wonderful thing. The flavours were of fire, ocean, densely delicious and slightly funky meat with green top notes from the herbs. I think this sort of thing might be what David Chang means by the phrase “ugly delicious”. Mrs Diner came dangerously close to finishing it, even the fatty bits that normally get pushed my way; a monumental effort from all concerned. 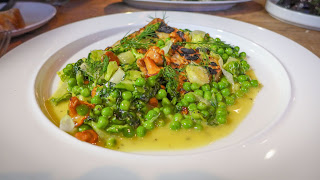 My wood fire-scorched turbot, cooked on the bone and served with peas and girolles was by comparison much more sedate, but still rather fabulous, coming drenched in a nicely emulsified butter sauce. The fish was maybe a weensy bit over, but on a very busy service I was impressed with how accurate the wood-based cooking had been. 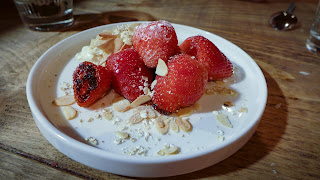 Puds were simple but good. Strawberries were roasted to jammy intensity, then served with a sort of deconstructed cheesecake. 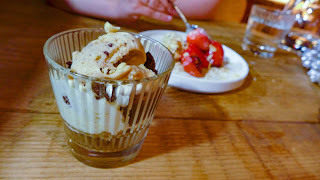 Meanwhile a sundae of peanut, chocolate and salt caramel delivered on everything you’d expect from that mix of ingredients. 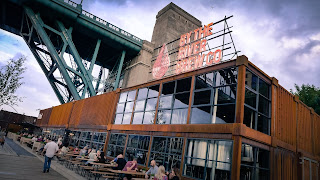 Service from the restaurant manager was first rate, ably supported by a super-friendly team. Music (New Birth, Q-Tip, The Brothers Johnson etc and so forth) was great. As shadows lengthened outside we had a fantastic view of the sun catching the bridges. 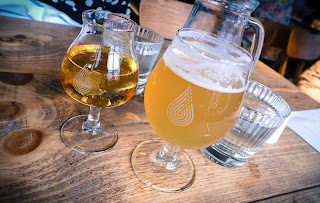 In short, we had a lovely evening helped, it goes without saying, by a first-rate selection of beer. It is worth just flagging up how much I’m enjoying the amount of flavour in lower ABV brews these days. 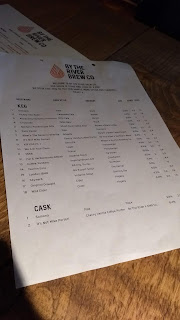 It’s great to be able to get something delicious without having to go for a double IPA or heavy porter. Case in point: Track Brewing Co’s El Dorado. Everything comes in either a third or two-thirds of a pint (as with everything else, blame the hipsters). Prices for food are very reasonable, in some cases ridiculously so. That lamb dish was a total bargain at £18, the pork jowl starter £7.50. 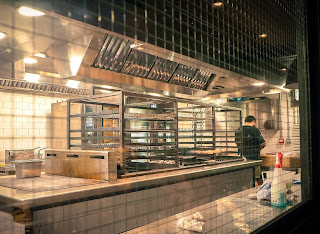 The few slight inconsistencies mean I have to withhold one star for food, but don’t you worry about that. The whole of By The River Brew Co's 'Creative Container Community' is a fantastic addition to the eating and drinking scene in our region and it’ll be here for the next four years. For me, Träkol is the jewel at its heart. It’s simple, primitive, clever and hugely enjoyable. And when this seemingly endless summer does finally fade out, no matter – it’s the one part of the operation where you can book a table and sit inside. Given the wild popularity of the whole site, they hardly need me to point out the obvious, but I’ll still doff my cap to all involved: you pretty much nailed it.