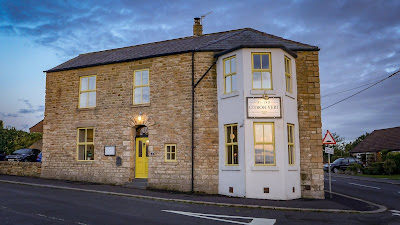 
I’ve been reworking my way through the best episodes of Anthony Bourdain’s “Parts Unknown” as a sort of personal memorial to someone I never met, but who had the most wonderful gift for finding connections in and between food, people and places.

He also had a great influence on my own cooking: his Les Halles Cookbook, which I bought in 2004, remains one of the most thumbed in my kitchen. It’s wonderfully funny and as outrageous as its author – in between the classic brasserie recipes it’s brimful of anecdotes of behind the scenes antics at the restaurant in Manhattan where he was head chef. His passion drips off the page like the juices of a medium rare côte de boeuf – I like to think he was a hopeless romantic about French cooking.

It stands to reason, of course. Bourdain’s own childhood food epiphany was the consumption of an oyster while on a family holiday in the Gironde - “It tasted of seawater...of brine and flesh… and somehow...of the future”.

For many of us, when classic French dishes are prepared and served well they can indeed raise the spirits. They taste of comfort, familiarity and reassurance. Nowadays this world can seem ablaze with division and fury and the future seems anything but certain. To enjoy a simple but delicious plate of food that has been prepared with skill and diligence, in much the same way as it has been since who knows when, is somehow to reject all the nastiness and look to a more stable world where, just maybe, things will turn out all right. Maybe.

That’s the feeling I had anyway, as Mrs Diner and I set about our starters in Bistro Citron Vert. To be clear, this wasn’t high end French cuisine: nothing was flambéed, the sauces weren’t complex, there was no deft removal of bones at tableside. But sometimes a skilled rendition of the mundane can be more satisfying than stiff formality. 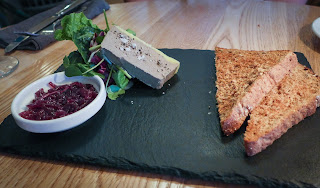 Take my properly seasoned thumb-thick slab of chicken liver pâté: this one was rich with dairy and booze, its pinkish heft bookended down one side by a dense ribbon of pale yellow butter. It was served cold enough to hold its shape, but not so chilly as to be unspreadable onto a couple of slices of nice toast, then anointed by a not-too-sweet onion marmalade. 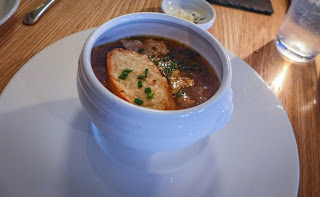 Or the good sized trough of French onion soup which held interest from the first piping hot spoonful to the lukewarm last, possibly thanks to the involvement of both beef and chicken broths, two bottles of wine, and some assiduous caramelisation in its preparation. Being fussy, I’d have liked a bigger crouton, and an awful lot more Gruyère, but still: this was wonderful stuff to be enjoying in a former mining village in County Durham. 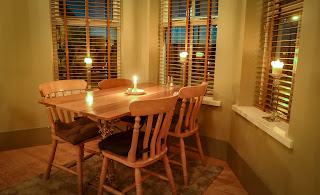 This place has been open a little over a year, after what appears like a fair investment in what used to be the Duke of Wellington pub. It is handsome from the outside, flashes of yellow around the window frames and door contrasting with lovely old stone, and very nice inside too. Rugs under each table and candles everywhere made for a homely atmosphere, while the Gallic playlist on the Sonos and tricolore bunting left nobody in any doubt as to the theme. 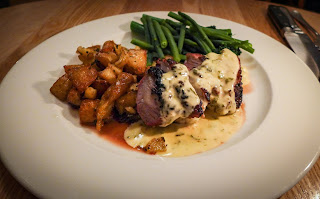 Mains followed a clear meat+sauce+potato+other veg format, but didn’t suffer for it. Mrs Diner’s rump of lamb, sporting a fine crust and blushing innards, was presumably well sourced as it had tremendous flavour. Napped with an old fashioned Paloise sauce (Béarnaise with mint instead of tarragon) and served with rosemary roasted potatoes and green beans, this was an uncomplicated triumph. 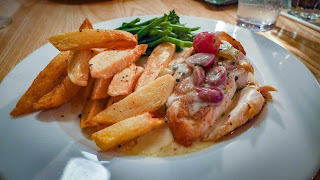 Nostalgia demanded that I order the Chicken Véronique, whose grape-punctuated tarragon cream sauce, normally taken with sole, may or may not go back to Escoffier. In any case, the bird had good flavour, the sauce was fine and the chips had a rustle to them, so all was well. 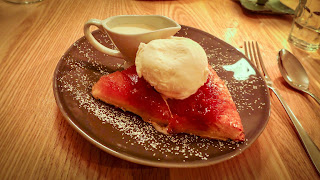 Puds gave the impression, rightly or wrongly, of having being prepared by someone whose heart wasn’t quite in it, but knew they had to bang something out anyhow. A tarte Tatin was tepid rather than oven-hot, had flabby pastry and nowhere near enough caramel about it. 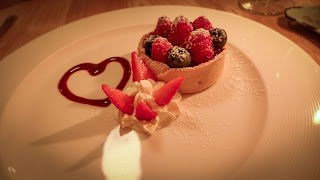 Meanwhile a white chocolate and raspberry tart was dangerously close to the type of thing you can buy in from willing catering suppliers. Its pastry in particular tasted flat and absent. 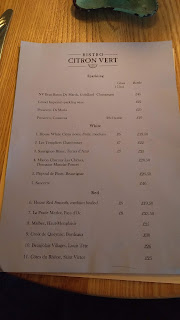 That was a bit of a shame. But this was still an enjoyable meal, lubricated by a not-too-raspy Sauvignon from the Languedoc, and an always-welcome glass of honeyish Sauternes (no vintages listed, though: Grr!). 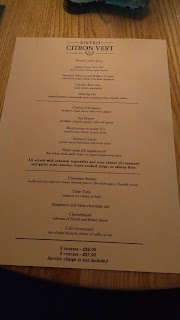 Service was top-notch, with special mention for the young bloke who was being trained up, and who normally would have been in the kitchen. It’s nice to see a restaurant take the time to make sure new waiting staff know what they’re about, but if we hadn’t been told we’d have had no idea he was fresh to this game. We exited as the last crimson hint of a sunset faded into gloom, feeling altogether cheered by a nice meal, and enjoyed the drive back to the bright lights of Newcastle in satisfied silence.

French bistro food is familiar in the same way as your favourite play, or a well told joke; when performed well, it reminds you why you fell in love with it in the first place. That might seem rather a lot to expect from a plate of food, but I think these plates are up to it.