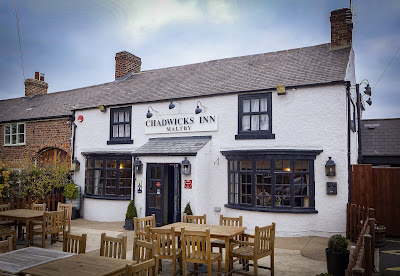 
They say that in the restaurant trade, the better the food quality, the tighter the margins. Good ingredients, talented chefs and reliable equipment all cost money. It’s not easy to make economies of scale at the highest level of cooking. And the fickle public can be weirdly reticent to shell out much more for a complex, multiple-ingredient plateful of real quality than they will for a burger. Not that I’ve got anything against a good burger of course, but you get my drift.

Which is why many chefs are faced with a dilemma: focus on the serious stuff that shows off their skills, or bring in the punters with a few sure-fire crowd pleasers? At the very lovely Chadwicks Inn in Maltby, just south of Middlesbrough, they’re doing a good job of both. On the one hand, this is definitely still a pub, with an actual bar where you could happily have a pint without feeling weird, so perhaps the fact that they serve burgers and fish and chips is fair play. On the other hand, they’re also offering delicious, appealing dishes of some ambition, as evidenced by their brace of AA Rosettes and a Michelin Bib Gourmand. 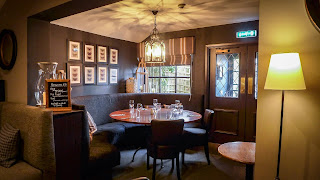 It is clearly the restaurant at the rear of this handsome whitewashed building rather than the bar at the front which is the heart of the business. All of which makes me wonder how chef Steven Lawford, who has worked under Andrew Pern and Kenny Atkinson, would feel about the fact that on the afternoon of our visit it was the burgers and battered fish that were flying out of the kitchen. 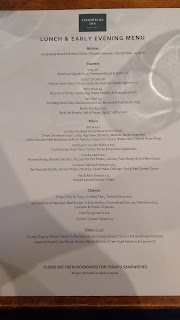 Naturally, we decided to place our vote in the slightly cheffier column and were rewarded with a really enjoyable meal. 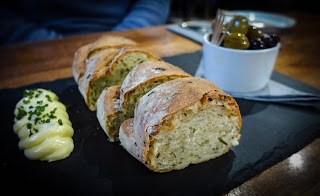 Excellent white bread, made in house and flavoured with rosemary, was a fine overture. 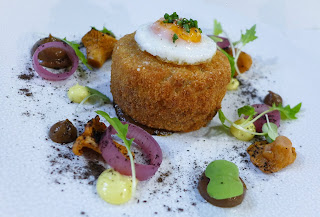 My starter of salt beef hash cake, with its mushroom ketchup, fried quails egg and tiny chanterelles, all came together like a daintily high-end full English. 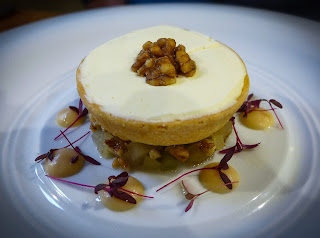 Mrs Diner’s goat’s cheese tart was pleasant, but a bit heavy on the main ingredient and a bit light on everything else. We struggled to detect the earthiness of the advertised baby beetroots, and the walnuts could have been toasted rather more, but it was certainly a pretty thing to look at. 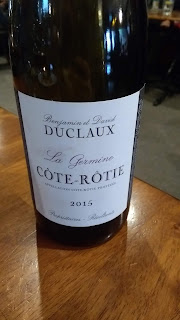 As we settled into the extremely tasteful surroundings - fabric banquettes, comfy leather chairs, exposed beams and a paint job featuring muted greys - I clocked a chalkboard of extremely tasteful wines being offered by the glass thanks to that wonderful invention the Coravin, and its nifty use of Argon gas. My 2015 Duclaux La Germine Côte-Rôtie made almost as good company for the afternoon as Mrs Diner, full of soft yet grippy tannins and impressive length. That’s the wine I’m referring to there. 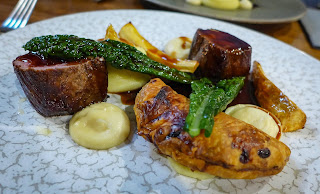 It went beautifully with my main course of venison, which was a classic premium cut/cheap cut combo. The menu claimed that the saddle was pan-roasted, although I thought I could detect the work of the waterbath in its uncanny tenderness. Either way, napped with a rich and shiny sauce, it was a delight. The proletarian part was played by a pasty of crisp pastry and steamy, rich innards of more deer, with cavolo nero and parsnip rounding off a wintry tour de force. 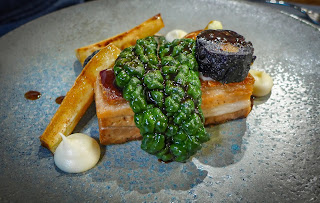 Ordered from the very reasonable set lunch menu - three courses for under twenty two quid - Mrs Diner’s pork main featured basically the same garnish as my own, but with a gloriously fatty cuboid of belly and some black pud subbed in for the venison. I’ll forgive them the ingredient repetition on account of the fact that we were ordering from different menus; and that it was all just so damn tasty. 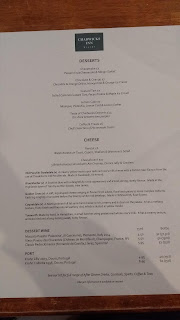 Both our puddings followed a similar theme: a neat slice of something with shards of eye catching sugarwork and a blob of good ice cream. 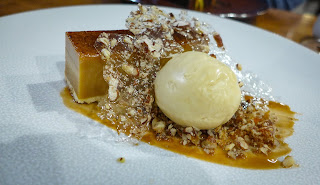 For the third course in a row I preferred, slightly, my own: a gorgeous cuboid of rich, sweet but slightly savoury salted caramel custard tart with see-through pecan praline and really nice maple ice cream. 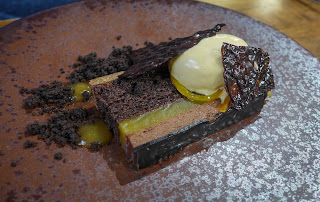 Mrs Diner’s chocolate and orange delice was almost excellent, but let down just a bit by a rather dry sponge layer. Nonetheless, it was great to see desserts feature technical skill way above the usual sticky toffee pud/crème brûlée suspects. Not that there’s anything wrong with either, when done well, but you get my drift. 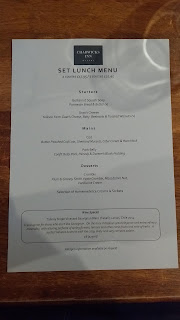 Service was as sharp as a button, but with charm to spare. We got the firm sense that everyone here was proud of what they were doing, which indeed they should be. Mrs Diner and I spent the second half of our meal jealously wondering what it would be like to have this place as your village boozer. Pretty brilliant, I’d say. Our meal, including a significantly higher than normal wine spend, came in at around £100. You could do it for much less by sticking to the set lunch.

While we were settling up, our waiter, unprompted, mentioned their ambitions for the place, which included the dreaded “M” word - you know, the one with the stars. Which brings me back to the burgers and the fried fish. In my experience, once Michelin have got you pinned as a Bib Gourmand type of place, that’s where you’ll stay. Can Chadwicks Inn break free of the shackles of the “pub classics”, to push on and forge a path as a full-on fine dining kind of place? Why would they want to? I don’t know.

All I can tell you is that this was one of the best meals I’ve had in some time and that Chadwicks Inn, even as it stands, is well worth your custom.