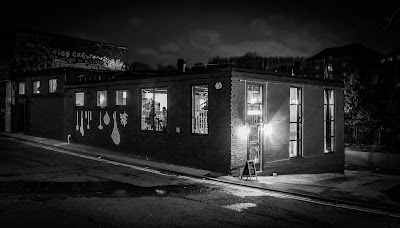 
Just so this doesn’t come over like one of those puff pieces you might read in our less critically-minded local food publications and blogs, let me start at the very end, with the one thing that wasn’t completely great: the espresso I necked just prior to leaving Cook House was towards the fruity/astringent end of the caffeine spectrum, whereas I’m a bit more of a rich/smooth kind of guy, at least where coffee is concerned.

That’s it. Criticism over. Now let me spend the rest of this post telling you why Cook House is such a wonderful place to eat.

For the uninitiated, the Cook House story is Anna Hedworth’s, she of The Grazer food blog, the supper clubs, the Jesmond Food Market, the upcoming cookbook and, until recently, the couple of shipping containers in Ouseburn that formed Cook House mk I. Phew! It makes me feel a bit knackered just thinking about it – some people manage to cram a lot into their days.

In moving to new premises just over the bridge from the Cluny, Anna did a “Sticky Walnut”, which isn’t a euphemism for some bizarre form of sadism, but in fact a reference to Gary Usher. Gary, chef of the restaurant of that name, blazed a trail by using Kickstarter to crowd-fund new ventures. When done right, this can be a genius move: you ensure early business by offering meals as rewards in exchange for investment, and you create a sense of community engagement that is likely to keep them coming back. All of which clever shenanigans would be for nought if either the food or service were a bit duff, but our own dinner, a few weeks after opening, turned out to be one of triumphs and minor revelations. 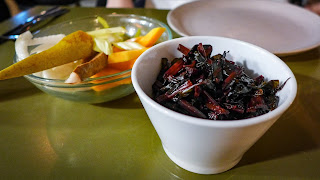 Witness the bowl of beet-top kimchi, whose eye-widening wallop of tangy, earthy savouriness made me feel a fool’s guilt for all the times I’ve grown these things but lobbed the tops onto the compost heap. Or a plate of house pickles in which slices of pear, butternut squash and fennel had all been made to taste more of themselves by virtue of different vinegar baths. 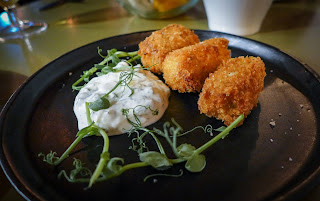 And, especially, dinky croquettes of smoked aubergine, whose eerily smooth innards gave up little gasps of steam as we cut into their perfectly fried exteriors. So much for the snacks section of the menu, but there was no let up. Everything we ate was, at a minimum, delicious. 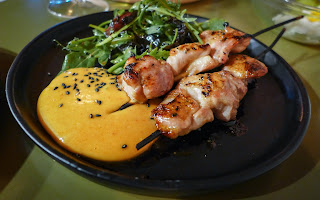 Korean chicken skewers of, I think, thigh meat (£7) were tender and sticky, with just a little maillard-powered crust, and a chilli paste aioli to swoosh them through. 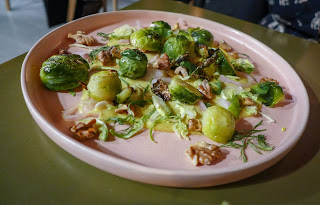 A plate of toastily roasted sprouts (£6) with curried mayo was given crunch, acid and freshness by walnuts, pickled shallots and dill respectively. This deliberate engagement with the full bandwith of tastes and textures is a feature of the cooking here. 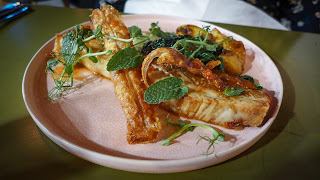 Each dish seemed to feature something sharp, something savoury and something refreshingly green. A hulking wodge of pork belly with tremendous crackling (£17) was given a kick up the jacksy by a startlingly tasty mound of nam-jimmed cavolo nero, with fabulous roast new potatoes for mashing into the meat juices. 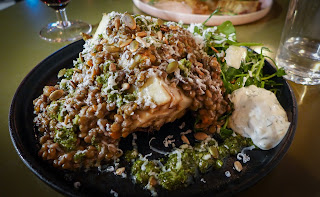 I struggled to find a good angle from which to take a pic of my main course of roast celeriac (£14), concluding that there in fact wasn’t one, but who cares about prettiness when something tastes so good. The thing itself had become almost fudgy in the oven before being buried under a duvet of minerally lentils, a heady dill green sauce and a microplaning of sharp goat’s cheese that brought seasoning to it. Vegetarians: you’ll be fine. 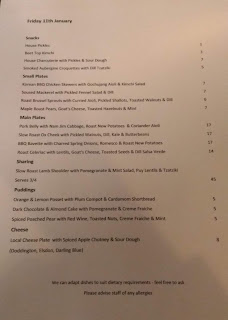 Whereas the first Cook House often seemed a solo performance (and I confess that when I reviewed the original back in 2015 I whinged on about the preponderance of toast, albeit perfectly good sourdough, with almost every dish at lunchtime), the considerably larger premises here - thirtyish covers upstairs where we were sat, more downstairs - necessitates an ensemble cast, and a more ambitious kitchen. I defy you to find a more friendly or clued up bunch of people to serve you food and wine and I left feeling genuinely less misanthropic than I had on entry. That is some feat. 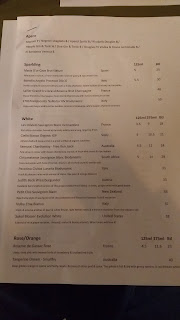 The short-but-punchy wine list that is as high on interest as it is low on intervention - and cost - may have helped in this matter too. An organic Sicilian Catarrato was just about funky and farmyardy enough for my tastes, thanks, while a Pinot Nero from Lombardy was a perfectly bracing counterpoint to the earthy pleasures of that celeriac dish.

To have gotten this far without noting the building is remiss of me. It feels like the absolute maximum value has been extracted from that Kickstarter cash. You enter on the mezzanine, with the main room upstairs. At one side, an open kitchen.

At the other, a startling, stunning whole-wall artwork, depicting all manner of comestibles in a brooding Flemish Baroque style borrowed from, maybe, Clara Peeters. It’s quite something. There are some similarly eye-catching flower arrangements. Furniture is functional but comfortable. There is an outside terrace which will come into its own as the days lengthen. 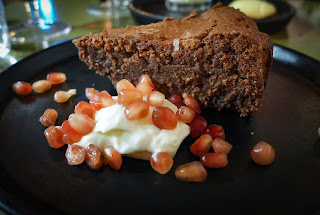 As we scarfed down a squidgy wedge of chocolate and almond cake, and an exactly-the-right-amount-of-sugar lemon and orange posset, we had cause to ponder how something that is so undoubtedly difficult as opening a restaurant where there wasn’t one previously can be made to look so easy. 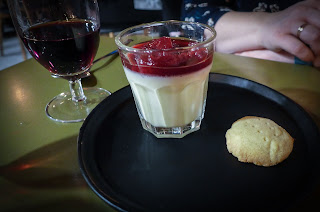 They were turning tables, on a bleak and dark January Friday, nowhere near pay day. I keep seeing “sorry, we’re full tonight!” messages from them on my Twitter feed. I doubt, therefore, that they need me banging on about how brilliant it all is, but here I am anyhow, because - that one espresso aside - it really was.

I personally think - and I mean this absolutely as an unmitigated compliment - that there is just something so homely, welcoming and uncheffy about the food Anna and her team prepare here that is deeply, joyfully gratifying. Some of it looks really pretty, some not quite so much, but it all just tastes amazing. It is by turns sturdy, dainty, lightness and heft, but always based on good sense and taste.

Remember that one time when you totally nailed that recipe from a book by, say, Diana Henry or Simon Hopkinson, and all your friends thought you were amazing? Well, every dish we ate tasted like that. Oh, and the music was brilliant too.