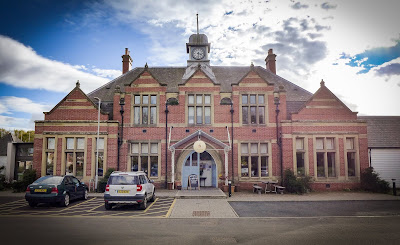 
Walking through the doors of St Mary’s Inn recently gave me an odd feeling of déjà vu.

When the place closed in May 2017, the company behind it (which also owns Jesmond Dene House), cited issues with the Bellway development that was growing around it, and for which it had been envisaged as a community hub. Well, it reopened in August of this year, and while there may be a new chef and general manager, pretty much everything else is just as I remembered it. 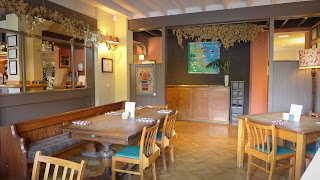 St Mary’s Inn used to be the administrative block of a mental health facility, a history that is apparent from its unusual layout, with various dining rooms linked by a central corridor. As before, these are all tastefully done out in acres of parquet and shroomy tones of paint. The multitude of strange ornamental wire dogs are still loitering about and there is still the same attention to details: proper cloth napkins, custom-made salt cellars, that sort of thing.

The proper bar has enough space to enjoy a real pint without feeling like you’re in the way, and there are enough fires and logs burning to keep someone employed just to make sure they are. It still has a feeling of newness about it, creating the rather peculiar sense that someone hit a big pause button back in 2017 but then forgot to press it again until just now. Which is exactly what happened.

Any misgivings about someone having mucked about with the space-time continuum soon dissipated when our food started to arrive. The menu is an appealing mix of pub classics alongside dishes of slightly more ambition. The good news is that under the stewardship of chef Chris Cheek, previously sous chef at Northcote Manor, almost everything we tried was on the money. 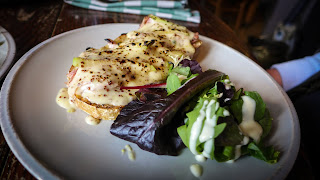 Any menu with a section of snacks - essentially allowing you to order extra starters “for the table” without raising any eyebrows - is fine by me. From that list, Welsh rarebit, tangy with mustard and studded with nuggets of salty ham hock, was nostalgic comfort. 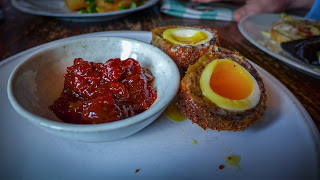 A black pudding Scotch egg was runny and crisp in the right places and came with a really bright tasting pepper chutney... 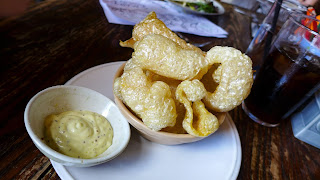 ...while “Pork Quavers” were the best example of the dehydrate-then-deep-fry treatment of pig skin that I can recall: airy, crunchy yet still vibrantly porky. 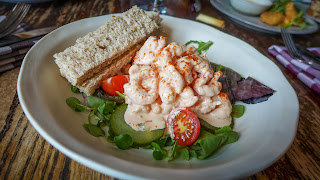 The rest of the meal continued the theme of well executed nostalgia. The only thing wrong with my prawn cocktail, for the full retro treatment, was that it didn’t come in a wine glass. Plump prawns, tangy sauce, crisp salad, fingers of crustless brown bread: good times. 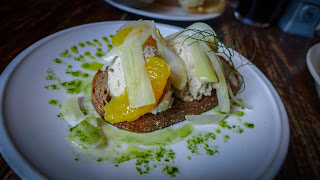 Mrs Diner’s mackerel pâté was an equally lovely thing, two hefty scoops of smokey, dairy-enriched smooshed fish being served with a lively salad of orange and pickled fennel to slice through the richness of the main event. 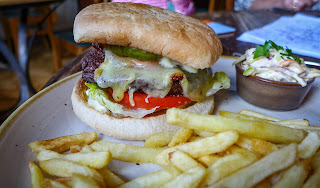 The one bum note of the meal was sounded by our friend’s burger. Though hewn of reputable beef, it tasted as though it may have been formed quite some time prior to service, and was therefore a bit dense and tight. 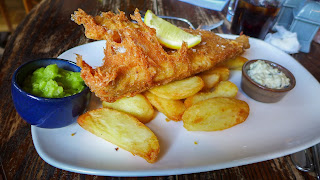 A far better version of a regular pub fave was Mrs Diner’s fish and chips in which a whopping fillet of haddock had steamed itself to flakey loveliness within a dramatically crisp shell of golden batter. Cracking chips, mushy peas and tartare rounded out as good a non-chippy fish and chips as I can recall. 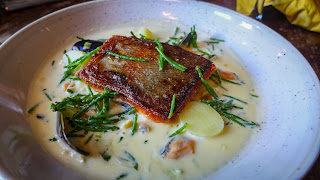 Rather more serious cookery was employed in the production of the remaining main courses. My own, of chalk stream trout, was a fine thing. A healthy piece of crisp-skinned fish bobbed in a generous moat of a cream chowder sauce along with nubbins of tasty spud, mussels and coastal herbs. There were whelks in there too and they were like rubber pellets, but aren’t they always? No matter, the overall effect was very impressive. 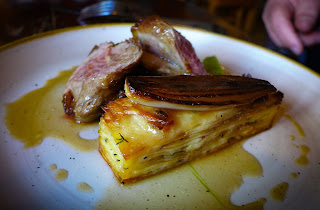 Ditto a well seasoned and tremendously tasty rump of lamb, roasted pink and served with a thyme-flecked boulangere potato, caramelised shallot and a light but substantial sauce. Classic combinations, executed with aplomb. 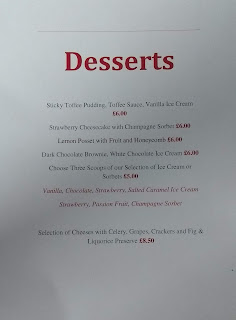 More of which was in evidence as we battered our way through pudding. 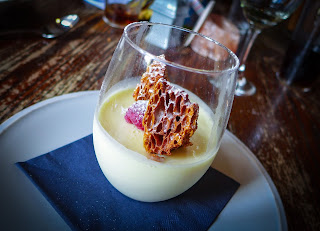 My lemon posset was rich and decadent, with just enough lift from the citrus to prevent the whole thing from becoming too much. Pretty much perfect, in other words. 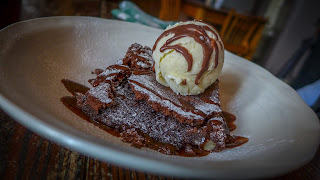 A warm chocolate brownie was a gorgeous molten squidge-fest with just the very crust being definitively solid. 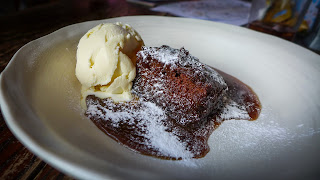 And their sticky toffee pudding was, for once, worth the calories, with a sauce that demonstrated what wonders occur when sugar is cooked to precisely the correct shade of dark brown, but not a jot more. 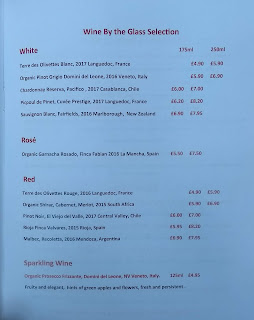 Service, including from at least a couple of staff that I recognised from St Mary’s Mk I, was attentive, friendly and smart. There’s a better than average list of wines by the glass, from which a Picpoul was just the thing for my fish. Three courses from this menu would cost you around £27. 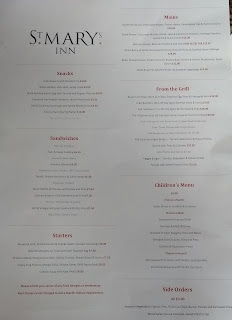 There may have been a change of key personnel since the first time round, but St Mary’s seems to still be offering pleasing menus of food at reasonable prices and employing consistently accomplished levels of technique. It’s a winning formula. We had a rather lovely afternoon, and have had another since, trying their Sunday lunch. Unsurprisingly, it’s good.

With enough tumult, change and friction in the world right now, it’s nice to see that some things just haven’t changed. We’ll be back.