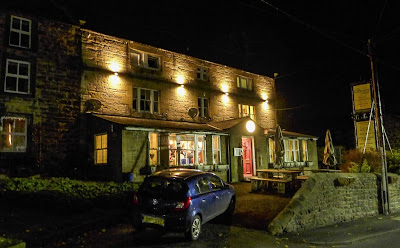 
Taking a right at the roundabout where the B6318 meets the A68, and heading north toward Kielder and Scotland, light immediately seems to get a good deal scarcer.

At this time of year, travelling at night, there is a strangely hypnotic quality to this section of highway. Headlights pick out the straight white lines on asphalt which stretches, without the interruption of a bend, for miles ahead. The only variety is provided by a series of dramatic dips and peaks. The pitchy darkness to each side of the car is disorientating, making it hard to tell whether you’re hooning up or down a slope, other than by the feeling in the pit of your stomach. It’s like being on a long, dark Tron-inspired rollercoaster.

My latest trip to these parts served as a slightly depressing reminder that it isn’t just light that this area around Kielder lacks. Good cooking is in as short supply as photons. While the world-class gloom brings visitors from all over the world, keen to peer into the infinite murk of deep space, there continues to be nowhere of truly stellar quality for them to eat. It is a mystery of intergalactic proportions.


The one exception I have found to this rule was The Pheasant Inn, where good ingredients were solidly cooked, in a very sturdy and unfussy kind of way. Well, they were when I reviewed it three years ago. But surely there is a demand waiting to be satisfied by something more ambitious, by somebody taking that famed local larder and cajoling it into the creative, or fun, or just delicious? Or even - just so long as I’m composing a list of demands from an imaginary proprietor - all three?

My latest search for this elusive prize took me to The Cheviot, the restaurant in The Cheviot Hotel, which sits slap in the middle of the village of Bellingham, just over the road from the Co-op. 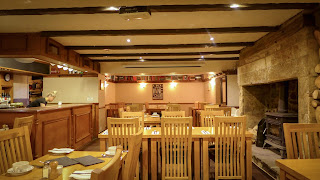 The pub side of the building was doing a fair trade on the weekday of my visit. It was the rather cold, soulless blonde-wood-and-paper-napkin dining room where I sat with a friend, whom I was treating to dinner. Except that as our starters arrived it was clear that the word “treat” might not be altogether appropriate. 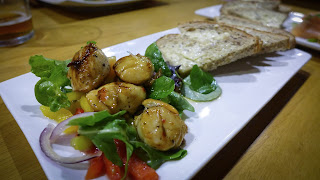 My scallops were tasteless little nuggets of blandness, lacking sear and with a pappy texture suggestive of their having spent a period of time in icy suspended animation. They were overwhelmed by a vaguely Thai dressing of orange and chilli and - weirdly - served with two buttered triangles of seeded sliced bread.

At a guess, the chef had accidentally buttered an extra slice while preparing my friend’s smoked salmon and decided that waste not leads to want not. Or maybe it was a throwback to those "High Teas" of the 50s, when pre-buttered (or margarined) bread was obligatory on every plate. 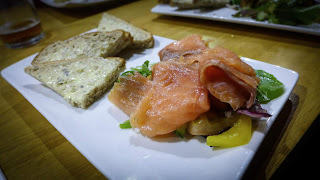 The fish appeared to be of reasonable, if unremarkable, quality. Caper berries were an enjoyable and sensible accompaniment. A small mound of dull salad featuring raw yellow peppers was neither. 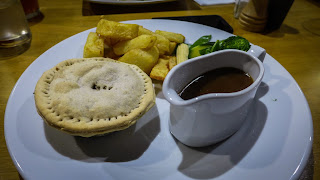 I had asked whether the steak and ale pie of the day was home made and was advised in the affirmative. Hunks of tough meat languished in a drab, processed tasting gravy under a lid of tired, pallid pastry. Whichever home produced this pie, it did not taste like much care or love - or, more importantly, technique - had been employed in its production. On the bright side, the chips were pretty good: chunky and crisp. I dipped them into a jug of that packety gravy. This proved a more enjoyable experience than eating the unbuttered and unseasoned “seasonal” (which season?) vegetables of baby corn and mange tout. 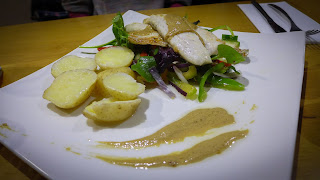 My friend fared a little better with his main of sea bass fillets, but not by much. Our old friend the raw-pepper salad made another appearance. An accompanying sauce of Dijon mustard tasted basically like that condiment had been let down with just a little cream; not inedible, but certainly not a level of cooking justifying the swoosh format in which it appeared on a pointlessly vast square white plate. The fish itself tasted of nothing in particular. 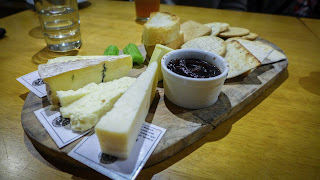 Cheese was provided by Northumberland Cheese Company, and was therefore good quality. It might have tasted good too, had it not been served fridge-cold. Blagdon Blue, a favourite of mine, is meant to be a semi-soft cheese. Here, it was dairy recast as a glacial rock. A waste. 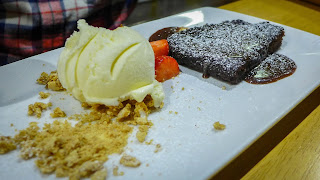 A peculiarly flat sticky toffee pudding wasn’t too bad on account of being sweet, hot and served with a decent vanilla ice cream. 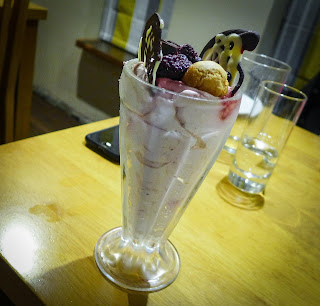 My Cheviot mess on the other hand was an unrelenting monster of a thing featuring far too much violently over-whipped cream and far too little of anything else. It was served in a tall glass which had me wondering whether “Sundae, bloody Sundae” would be too offensive a title for a restaurant review. 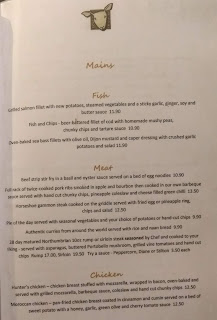 What I do find a bit offensive is the fact that the awful pie cost me a tenner, the sea bass twelve and those scallops a further seven. I never begrudge ingredient costs, but I do dislike paying inflated prices for a chef’s lack of ability. This was a nondescript shrug of a meal, with flashbacks to the strange, grim affectations of British catering that I had thought we had mostly jettisoned sometime in the 1990s. The only bright spot was the service of a friendly waitress who succeeded in humanising an otherwise bleak experience.

I take no more pleasure in complaining about this meal in particular than I do in wondering more generally about the lack of better options nearby. If I’m missing some local gem, do let me know. But for now, as far as I can see, it’s not just the skies above Kieder that are as dark as sin.