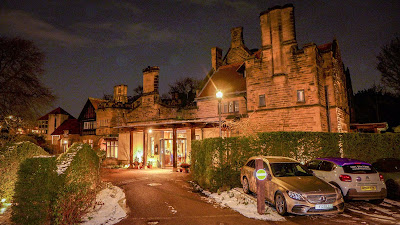 If only for reasons of civic pride, I’ve no interest in having a pop at any of our more venerable and venerated restaurants. On the other hand, the same rules apply to every review, be it a fresh new opening or an updated assessment of an old fave: one meal, unannounced, and I’ll pay my own bill.

I’m quite certain that middling reviews were not what anyone envisaged when Jesmond Dene House moved to replace Michael Penaluna by installing Danny Parker as Executive Head Chef. Parker arrived last October from a head chef role at Kenny Atkinson’s House of Tides, in a move that caught the attention of the trade press, helped by positive showings on BBC’s Great British Menu.

It looked from afar like a great move for everyone: Jesmond Dene got a young, hungry chef with knowledge of what is required to get the attention of the Michelin folk; Parker could step out from the shadow of Atkinson, taking over the reins of a more varied and wide-ranging food operation. It still might turn out that way (I really hope it does - I think he’s a very good chef). It just didn’t seem like it on the weeknight of our visit.
It’s not that anything was world-endingly bad (3 stars is still “Recommended” in my book, and better than most restaurants in the region), more that much of what we ate lacked impact. 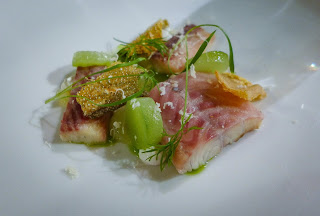 Take my starter of smoked eel with cucumber, apple and horseradish. The whole thing was just too well mannered: not enough smoke on the fish, not enough salt on the “crackling” of its skin, not enough thwack from the meagre scatter of horseradish. It was a pretty assembly to look at, but barely registered a shrug in the flavour department. 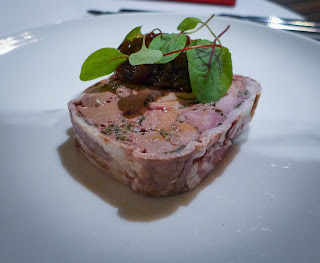 From the house menu - twenty five pounds for three courses - Mrs Diner’s French country terrine, a thumb-thick mosaic of meat wasn’t flattered by being served fridge cold, nor bound in rather flabby bacon. There was game of some sort in there, I think, but honestly it was cold enough to make it hard to tell. A rich liver mousse held the thing together, and was really rather good. I asked our waitress what it was. She wasn’t sure, but said she would find out. If she ever did, she kept the info to herself.

Which brings me on to a tricky topic. Perhaps effusively, and constantly, addressing guests as “my darlings” is just how she rolls, and maybe some people love it, and that’s fine. It sure as hell didn’t work for us though, coming dangerously close to condescension. A key part of hospitality is reading your guests. On a less subjective note, being unable to answer any questions about the menu – “we don’t get told everything about new dishes” – isn’t great for any restaurant, let alone one at this level. 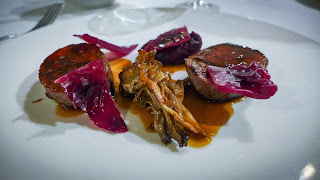 From the same à la carte menu as the eel dish, I splurged on a venison main course, clocking in at a sturdy £32.50. While on the one hand I’m reticent to criticise restaurant prices - good ingredients and good staff cost good money, yadda yadda and so on – I think that a plate of food at that price point ought at least to be complete.

Our most expensive dish transpired to be a lecture in parsimony, in food form. Two meagre discs of very sous-videy (hence rather bland) tasting deer, garnished with a purée and a few flakes of pickled red cabbage, a sauce which the advertised black garlic had barely tip-toed through, some mercifully delicious hen of the woods mushrooms and a dull bowl of broccoli. This dish - underseasoned for my taste - lacked any sense of generosity or personality. Put it this way: I was glad Mrs Diner had ordered a bowl of (fat, crisp) chips. 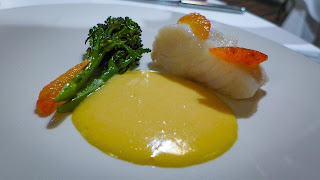 They were purchased to accompany a house menu fillet of pollock whose eerily uniform cooking and lack of any flavour-giving roasty brownness again hinted at the use of the water bath. I’m more and more coming to the view that these devices are sometimes to the advantage of the kitchen over the diner. I have two of these at home, and I use them quite a bit, especially for large dinner parties, but at the end of the day, give me a pan, salt, a spoon, a flame and lots of butter and I can make anything taste better. This dish came with a good, bracing-yet-rich Maltaise sauce and a mickey-take garnish of two sprigs of broccoli and three segments of blood orange. 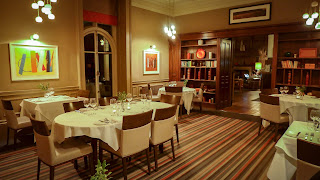 So much for the savoury dishes that we tried, but I also rather mourned the ones we didn’t. Previous meals here have begun with really excellent amuses, but no more, apparently. The pickles and crisps to be enjoyed in the gorgeous lounge whilst perving at the menu? Gone. Whatever budget has been saved in their removal has been achieved at the diminution of the overall experience. Coming here, especially at à la carte prices, needs to feel special. 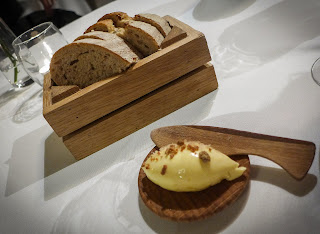 We did get some unremarkable sourdough and butter – yippee. I also wondered whether a wildly varying playlist that featured the same Bob Marley track twice was in keeping with the impression they want to achieve. 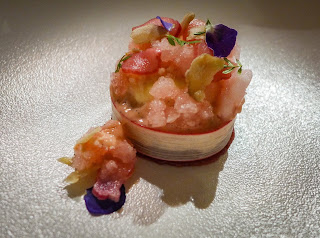 Puddings were, thankfully, much better than both the bread and the music. My own, a dainty yet assertive riff on rhubarb and custard featuring the cannabis-a-like leaves of apple marigold was a much needed reminder of the intrinsic value, over everything else, of flavour. From the cheaper menu, Mrs Diner enjoyed a solidly made crème brûlée with the lovely almond/vanilla notes of tonka beans. I’d be willing to bet that head pastry chef Cal Byerley, formerly of Rogan & Co and The Forest Side, was on duty.

Unlike Danny Parker, who wasn’t. Does that matter? Not here it shouldn’t. No head chef works every dinner shift, seven days a week – that’s fine. But the struggle and the challenge is to set things up in such a way that the quality doesn’t drop off when you’re not about. I’d like to think this meal was just an off night, in more ways than one, but I’m not so sure. 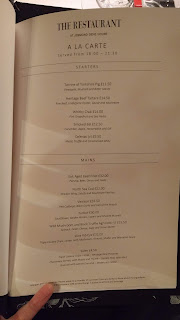 The menu I was offered, to my eyes, lacks excitement in terms of both ingredients and execution. It’s modern country house hotel by numbers, featuring terrines, tartares and other things that can be prepped in advance and assembled with not too much actual cooking à la minute. Service - with the exception of the sommelier, who was great - was patchy and not up-to-speed. There’s some way to go yet if Jesmond Dene House is to re-become the dining-led destination hotel they talk about in the blurb, and which I’ve enjoyed many times in the past.