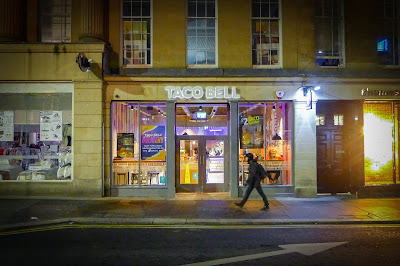 
Sometimes, after dishing out a bunch of stars to the worthy, or more often withholding them from places that think their customers are mugs, I’m asked about my judging criteria: how can I review both upscale Michelin-starred restaurants and down at home diners? Am I biased against chains and faster food in favour of fine dining and independent restaurants?

Well, to be honest, I do prefer my meal to be cooked by a real chef, rather than arrive pre-prepped in a catering van; a homemade scotch egg of runny yolk and loose, well seasoned forcemeat will always trump one of those tight, orange-crumbed supermarket jobs. But to my mind, if a place calls itself a fish and chip shop it ought to be able to offer good batter and fresh fish; a burger place should stand or fall on its burgers; and when a place calls itself a taco house, it ought to really know how to make tacos.


I try to make fair judgements of all the food I review, whether it seduces me with love or is thrown at me at a hundred sales an hour. Even amongst the lowest forms of food service there are champions. Some places do the mass-produced fast food thing with panache, managing to at least get something reasonably tasty into the cardboard box. There are certain expectations of all food establishments, even fast ones owned by global megacorps, and if they hit them they ought to be given credit.

All of which is a long and rather rambling excuse for the fact that I recently took some friends, all hungrily fresh from the badminton court, to eat in Newcastle’s first Taco Bell. Well, that and a hefty dose of nostalgia.

Many, many moons ago I found myself in San Francisco, skint and hungry at the fag-end of a round the world bout of backpacking. Taco Bell was my saviour, their incredibly cheap and generously-stuffed burritos and tacos keeping me fed for the final few days until my flight home. Unfortunately, a few things seem to have been badly lost in translation as this rather less familiar stablemate of the KFC and Pizza Hut brands (all owned by a conglomerate optimistically calling itself Yum!) has belatedly followed me over the Atlantic to our shores. It should have stayed in California. 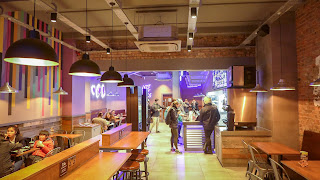 The problems started when we tried to place our order. There was just too much damn admin. We tried to use one of the touchscreens, but gave up halfway through when I couldn’t figure out how to change my Pepsi to a beer, and sought out a human instead.

For anyone unfamiliar with the menu, each meal order presented a dizzying array of options around key variables such as protein type (choose twice if your meal includes both a taco and a burrito), optional burrito fillings, size and drink type. Exhausted, we took our seats, the strange purple hue of the lighting doing nothing to flatter anyone, and listened to Eastside by Benny Blanco and Khalid. Not a fan. 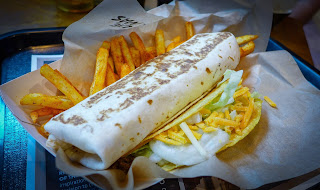 There were, for example, the piddliest quantities of beef and cheese in my crunchy taco, the thing being mostly bulked out with lettuce, which was the dominant flavour. Taco Bell's website claims it is "The Stuff of Legends"; a more honest description would be "Stuffed with Lettuce". It also says "What you see is what you get". Which is not a lot.

My fajita burrito was a dud too, the pulled pork being completely nondescript, the cheese barely there. There just wasn’t enough of anything interesting in it, the flour tortilla itself packing as much flavour as anything it contained. 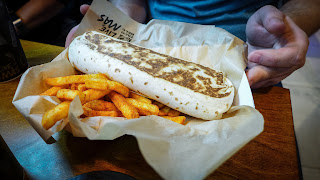 My friend’s Beef Grilled Stuffed Burrito meal was a marginal improvement on my own, on account of some lubricatory refried beans, but he too complained at its lack of heft. 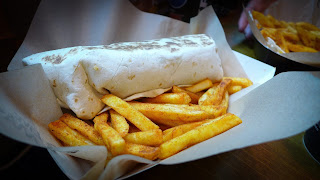 Elsewhere on the table a crispy chicken burrito at least had some interesting texture going on from its frying, but the chicken was dry and dull. 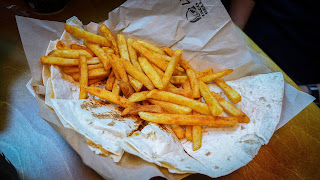 The owner of a chicken quesadilla meal thought it not too bad. Once she had requested the removal of its jalapeno sauce, this consisted of flattened tortillas, encasing the chicken and some “3-blend cheese”. I tried it and didn't share her enthusiasm.

The fries, which as standard come in some sort of very mildly spiced seasoning, were neither a disaster nor a triumph. The hot and mild "Border" sauces, which come in annoying fiddly little sachets like something from the early 90’s, were grim as hell; no real kick, and with a weird gloopy texture.

Sorry if this isn’t my most compelling review, but honestly, this was a pretty glum-inducing meal. As I ate it I felt the life being sucked out of me. Typing this up is triggering similar emotions. There was at least some comedy at the end when our ordered churros hadn’t turned up. The server demanded to see our receipt, then asked whether we hadn’t already eaten them. If we had, we certainly would not have asked for more. 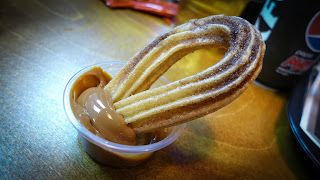 £1.29 gets you two tepid little twists of batter served with a caramel glop that bizarrely smelled more of its dinky plastic coffin than of toasted sugars. 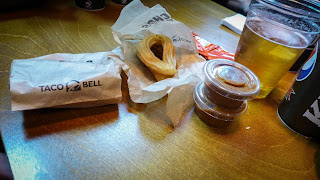 I’ve got no wish to have a go at the folks working here, but they did seem almost as confused by the menu as we were. My pint of Heineken, despite magically filling from the bottom of its plastic glass like at Spurs’ posh new stadium, tasted predictably rubbish. The interior of the place is all exposed brick, light wood and unfinished looking bits of metal.

When I got home, still hungry, I had a few slices of toast. That shouldn’t happen when you spend £9.68 on a meal and drink in a fast food joint. Leaving aside whether this meal was objectively awful (it was), it represented an abject failure within its own category.

Taco Bell is a poor imitation of a flawed concept; the American original is a bastardisation of “Tex Mex”, which is itself one step removed from the real thing. How it survives, let alone thrives, in Southern California, where it's so easy to get genuine Mexican food, is beyond me.

Here in Newcastle, if you want a half decent burrito, go to Zapatista’s. Or take a train to Durham and wait for Barrio Comida to open its doors in a few weeks’ time – their tacos on Newcastle’s quayside were spot on. If you really want to order stuff on a touch screen, go to your local McD’s. At least there you’ll be able to eat things that will provide, however fleeting, some form of first-bite satisfaction. Even if the oil in the chips makes you nauseous.

But Taco Bell? I really don’t see the point.