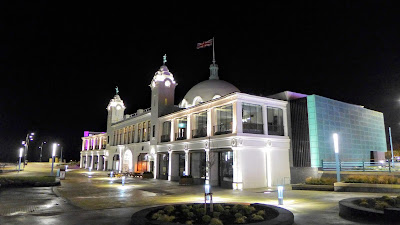 
A small part of me is sad that the remarkable reboot of Spanish City hasn’t incorporated some element of the dodgems, waltzers and arcade machines that I hazily remember from a sepia-tinged yoof. 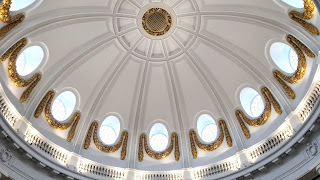 On the other hand most of me is impressed by the sight of its dome, beautifully decorated inside, the exterior gloriously floodlit at night. And all of me is delighted that, in its rebirth, we now have eight new venues to get fed and watered by the coast in Whitley Bay. I suppose that costly refurb was never going to get funded through sales of rollercoaster tickets.

The current food and beverage options include an outpost of decent Newcastle micropub The Split Chimp, a pancake and waffle house, a Champagne bar, a chippie - of which more later - and a tearoom. The premium offering, 1910 Steak & Seafood, is named after the year in which Spanish City originally opened; it also reflects the menu.


It was a dark, rain-pelted night when we rocked up, so in lieu of any photographic evidence, you’re just going to have to take my word for it: when the conditions are right the view from 1910, and the champagne bar that adjoins it, will be remarkable. They’ve got full-height windows that peer up the coast to St Mary’s lighthouse. That night we could barely glimpse the edge of the briny. 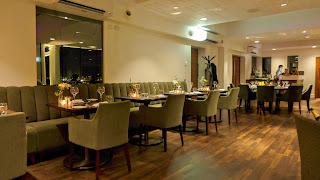 Despite the weather, thankfully the restaurant is comfortable enough, if a bit echoey due to the lack of tablecloths, carpets or other soft furnishings. Plus points for the wine glasses, which looked rather like Art Deco UFOs. Same kind as they have at the Raby Hunt, I think.

I honestly wanted to love this meal, and to tell you that you must go, and that it’s worth the dollar and all that, but I can’t do so without substantial qualifications. Case in point: Mrs Diner’s steak. 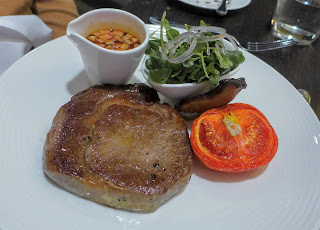 At thirty two quid, a ribeye needs to be something special; this, despite the claims of 36 days of ageing, absolutely was not. The main crime was that it just hadn’t been in, or under, a hot enough pan or grill, and was thus insufficiently charred. It also tasted way underseasoned, was tough, and had that weird livery flavour you get when beef has been boiled rather than seared. The bone marrow sauce tasted rather like it may also have contained some of the mushroom and tarragon sauce also on offer. Hmm. A dull half tomato and a seen-better-days king oyster mushroom rounded out a sad dud. Admittedly the french fries were rather nice, but this, from a restaurant with the word “steak” in its name, is not good enough. 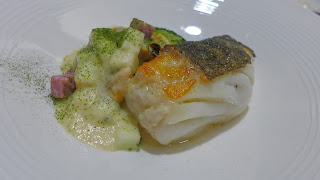 Elsewhere things were certainly better, if not consistently worthy of outright praise. My main course of cod possessed lovely thick flakes that peeled satisfyingly apart, but lacked crisp skin and was garnished with some rather flabby lumps of smoked Morteau sausage that would also have been improved by being given some colour. 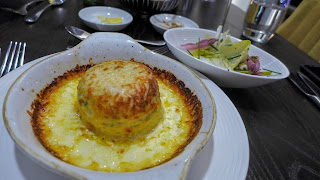 Starters were more like it. A twice baked soufflé was a textbook rendition of the artery-bothering classic, an eggy cloud swimming in a shallow ramekin of dairy featuring Barber’s sharp Cheddar, with a bracing endive and pear salad on the side to prevent the whole thing getting too much. 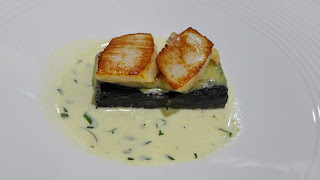 Mrs Diner enjoyed the rich man/poor man combo of hand-dived scallop perched on a cuboid of silky black pudding in a puddle of more cream - flavoured with fish this time - although the dish was crying out for some textural contrast. You wouldn’t need a single tooth in your mouth to enjoy this dish. At £13.95 for a starter, I also think it’s reasonable to expect at least two pearly scallops, rather than one chopped in half. 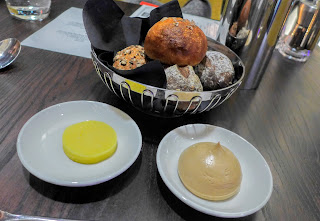 Perhaps our expectations had been raised too high by an opening fanfare of excellent bread. Three different rolls, all warm, including a black pudding job that actually tasted of the stuff. Two butters, including a floaty light orb whipped through with beef fat which completely avoided the weird clagginess that sometimes accompanies such things. Beef fat butter smeared onto black pudding bread was about as much animal as one bite can legally contain, and no worse for it. I expected no less from pastry chef Kristian Branch, who made the afternoon teas legendary at Jesmond Dene House.

Talking of chefs, the one with overall responsibility for the food at 1910, Mark Percival, wasn’t behind the stoves on the night of our visit. I don’t know if it was his night off, or whether managing a multi-site venue like this means he doesn’t get to shake the pans as often as he would have done at his previous gig at Langley Castle. I also don’t know if things would have been much better had he been in the kitchen. The thing is, at these prices - our bill was £117 with just one glass of wine, not including service - they need to be very good all the time. 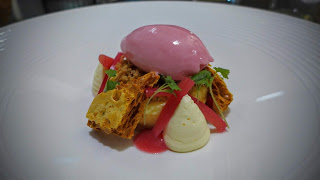 One of our desserts was a winner, a rhubarb and custard number featuring dinky poached batons of the former, a baked disc of the latter, and pieces of honeycomb. 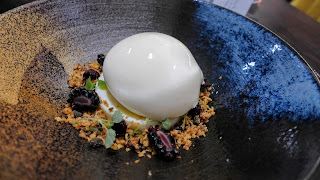 A yoghurt panna cotta with blackberries and granola tasted too much like a healthy breakfast. I want to finish a meal with a splurge of decadence, not spartan austerity. I also thought it was a bit lazy to bung a garnish of lemon verbena on both puddings.

Still some work to do then, if 1910 is to become the destination heavy-hitter that this venue deserves. 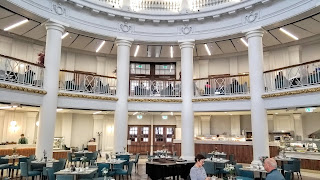 There’s brighter news from downstairs though, where Trenchers of Whitby have taken up residence under the main dome and have fetched the Platonic ideal of fish and chips from the metaphysical realm into our own temporal, corporeal plane. Yeah, it actually is that good. They’re frying in beef dripping, they’re timing everything perfectly, the staff are tremendous, there’s live jazz on a Sunday afternoon and you can admire the stunning restoration of this iconic building in all its glory. 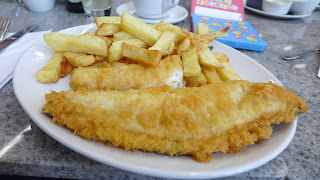 Over two separate visits I found both the haddock and the plaice to be superlative. The batter is light, crisp, but not insubstantial. It is greaseless enough to be enjoyed even by your elderly relatives without requiring a side order of Rennies, and yet it tastes thoroughly like a treat ought to. The plaice in particular had a beautifully creamy, milk-white flesh, the disappearance of which I began to mourn even as I devoured it. Emotional. 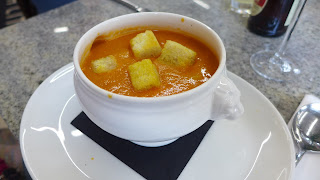 They do a lovely fish soup too, full of the flavour of shells, and with tender prawns lurking in its depths. The menu has other fun sounding stuff that I haven’t got round to yet, but intend to. I reckon the fish pie might be decent. And the chalkboard specials - there was a half lobster with chips for about twenty quid - sounded good too. 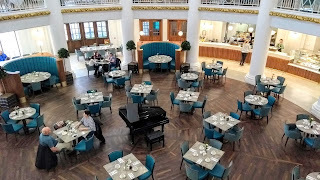 You can drink builders tea or champagne and it will feel equally appropriate. Why not both? I did. For pudding, there was cherry and almond tart, or a trifle. If Mr Branch has had anything to do with these, they will in all probability be superb. This is, in every way possible, the most impressive chippie I’ve ever been to.

My current advice on navigating the numerable options presented by Spanish City is to nip upstairs to the champagne bar for a quick sharpener, take in the view (assuming it’s not all dark and miserable) then downstairs for deep fried perfection. Yes, you’ll pay over a tenner for fish and chips, but it’s worth every dime. Unlike - for now at least - the fancy bit upstairs.