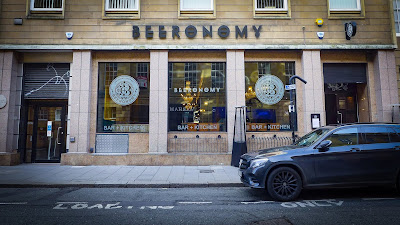 I know the ol’ catering biz is well known for its quick-sharp comings and goings, but sometimes I can’t keep up.

The last time I ate chef Ronald Robson’s food was in the spring of 2017 at The Merchant’s Tavern down at St Peter’s Basin, where he was brought in to make their menu a bit more serious. It wasn’t quite a success, or at least not on the night I tried it. I subsequently discovered he’d moved on round about the time of my visit, so I wasn’t really eating his food at all. Just as well – I wasn't very enthusiastic.


I almost caught up with him again at Beeronomy on Hood Street, which after a protracted gestation period and a licensing challenge or two from local competitors, opened at the start of this year. In between he was shaking the pans at Nova Seafood Grill on High Bridge, which closed so soon after opening that I never even got round to eating there, much less reviewing it.
After my trip to Beeronomy it’s taken a while (far too long, for various technical reasons) to get this review into print and the management now tell me that Ronny left a couple of months ago. So I don’t know who cooked my meal: but it got three stars anyway. Like I said: I can’t keep up.

Beeronomy does benefit from a management team with knowledge of the sector, as the team behind it own Mordue Brewery. The schtick - sorry, concept - is all about pairing beer with food. Beer is great, and so is food, so hurrah, right? Well, not quite, but we’ll get to that in a bit. 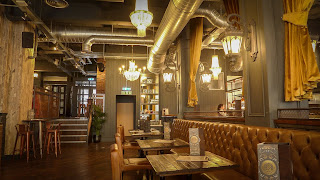 Firstly I should say that they’ve done a jolly nice, if not wildly original job of the interior. Wood, leather, dark grey paints, chandeliers and velvety drapes are the order of the day. It’s what would happen if the Bridge Tavern got frisky with Pleased to Meet You. I especially liked the almost glowy-blue tiles in the gents - must get some of those for my next kitchen fit-out - and the fact that the kegs and casks are stored behind what used to be the safe in this former bank.

Mrs Diner and I settled in to a soundtrack of unremarkable but appropriate-for-lunchtime indie music and ordered liberally. Because, well, that’s just how we roll. 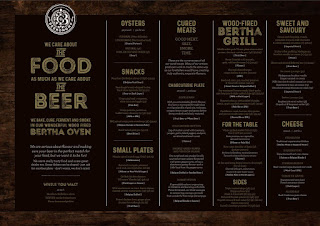 Right from the off, a pattern formed. This was a meal of consistent inconsistencies, where the promise of excellence was never far away but too often kiboshed by some error or dubious ingredient. 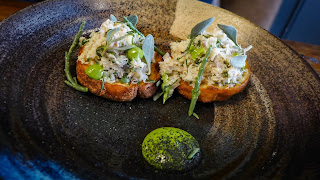 From the snacks and small plates bit of the menu, buttered crumpets loaded high with hummocks of pristeen crab, samphire and sea purslane and dods of a herby mayo were a lovely thing. 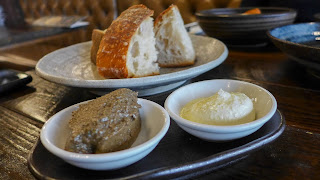 Sourdough bread and whipped butter was no fun at all though, the former dried out from its reheating in the oven, the latter sporting a weird claggy texture. I’m yet to be convinced of the merit of whipping any animal fats, it makes them stick to your tongue instead of melting lusciously. Nobody wants animal fats sticking to their tongue, or at least nobody I’d trust. 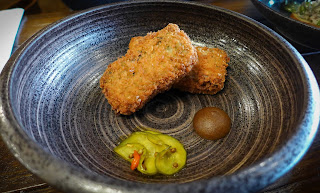 Pigs head croquettes were generous cuboids of porcine fun with a blob of miso to dredge through, while chicken skewers had a lovely sesame-encrusted char and came served with excellent kimchi which, like Craig Charles’ radio show, sported just the right amount of funk. 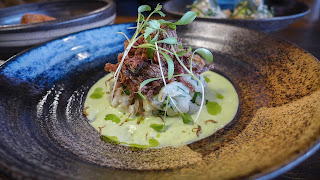 Then a rather flavourless special of crispy lamb arrived - perhaps a nifty way of using up leftovers? It was perched on a bed of jerusalem artichokes and herb yoghurt. These are three things that should get on just great together, but each component lacked punch or vitality, making for a plate that was pretty to look at but dull to eat. 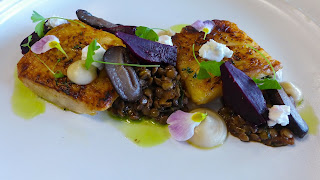 A Dr Jekyll main course landed in front of me. Squares of perfectly yielding, thyme-flecked celeriac, presumably cooked in their Bertha charcoal-powered oven were zinged up by pickled shiitake mushrooms and baby beets and lent extra depth by some lentils which tasted like they had been cooked in a reduced sauce or stock. This was a smart vegetarian dish, light and substantial all at once. 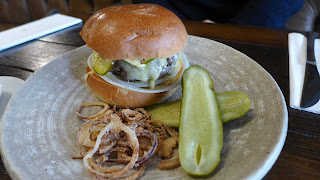 Mr Hyde turned up in burger format, much to Mrs Diner’s distress. It was a mustard-bomb of a thing, drenched in so much condiment as to make it hard to tell whether any cheese had been included. The patty tasted like it may have derived from decent cow, but was so overcooked it had a boiled, livery taste. Cold rings of crispy shallots tasted like they had become crispy quite some time prior to service. 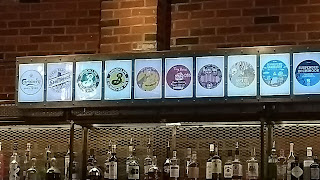 At this point we need to address the whole beer pairing thing. Basically it didn’t happen, and I don’t see how it can in the current set-up. Having scanned the blurb in advance I was expecting to be upsold ⅓ pint glasses of hop-bomb fun to accompany our food, but no. The thing is, of the 10 keg lines, four were given over to deeply familiar mega-beers, and another two to Beavertown’s (of which 49% is now owned by Heineken, make of that what you will) most ubiquitous offerings.

The menu listed pairing suggestions for each dish. 5 of the dishes would apparently have benefitted from the presence of a saison, as indeed would I, as I really fancied one. None were available. Ten years ago this would have been a very impressive beer line-up. Now, for a beer-focussed pub, or restaurant, it feels a bit sub-par.
No issues with service though; staff were all lovely, in particular our waitress who, according to the bill I’m squinting at, was called Chloe. So there. Prices for food were very reasonable too, those piggy croquettes a steal at £3, my excellent celeriac main a bargain at £9.95. We paid just over £70 for what was a very indulgent lunch for two. 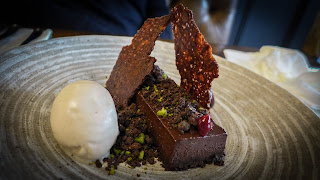 We finished with a chocolate ganache thing for her - rather too dense, and scattered with annoyingly flavourless crunchy bits - and some nice Stichelton and Tomme de Savoie for me. 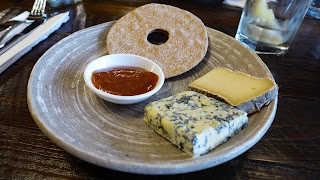 This was a nice, but fairly forgettable lunch. Or at least it was forgettable once I had ceased to enjoy its rather dyspeptic after-effects, if you get my drift. That never happens to me, with my famous iron guts the toast of both sides of the Atlantic. I must be losing my vitality. For a meal that tasted a bit down on the seasoning, we weren’t half thirsty afterwards too.

We left with the impression that Beeronomy was almost good at quite a few things, but not really impressive at any one thing in particular, and certainly didn’t deliver on its claimed concept. That, given its prime location and clearly capable kitchen, may yet prove to be enough. More, and better beers. Fewer, and slightly tweaked dishes; that would be enough for me. Three stars puts it in my Recommended category. Just.

I now see that Beeronomy, under its new kitchen management, has indeed tweaked the menu, and in doing so removed some of its ambition. Shame. It reads like regular pub food to me. If anyone tries it, let me know how you get on. 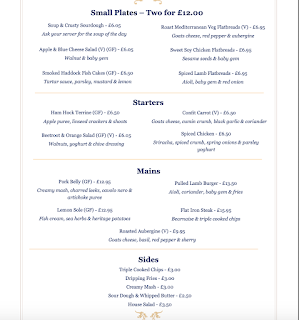 Here is the new menu and a link to their website.