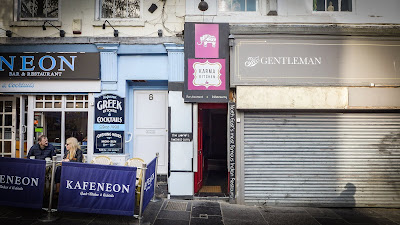 
Can there be anything more stereotypically and pejoratively “Geordie” than the sight of two boozed up lads heading to the Bigg Market for a curry? Until someone figures out how to joyride a Greggs Sausage Roll, probably not.

You might think that this wouldn’t be my kind of thing. Surely my gentle and genteel disposition would prevent such larks from floating my boat? Well, think again. Granted, this wasn’t a conventional Bigg Market curry story. My friend and I, finding ourselves with a rare free afternoon, didn’t stagger to the curry house filled with pissy “Australian” “lager”, in search of the world’s spiciest hell-broth - I like to think we are at least a little better than that. For our destination, Karma Kitchen, purveyor of home-style vegan cooking, is a great deal better than your average Bigg Market curry house.


That's why we started our afternoon in style, sharpening our appetites in Alvinos, where they know how to make a thoroughly decent Negroni, not to mention a pretty good Old Fashioned. Old Fashioned is my aperitif of choice by the way, in case you’re buying.

“Vegan? In the Bigg Market?!” my friend said with both eyebrows raised, as I prised out my Maraschino from between the ice cubes.

Karma Kitchen began life as a mother and daughter vegan food delivery service before opening late last year in premises next to Kafeneon. I recalled that we had visited this upstairs room once before, as this used to be Latif’s, a restaurant made somewhat infamous by local laugh-rag Viz, which referred to its owner Abdul Latif as a “curry mentalist” on account of his claim to offer the world’s hottest curry. Yours for free, if you could finish the blighter. My friend actually managed this once, which I know, as I witnessed it. That is another story for another day. Let’s just say there were consequences. 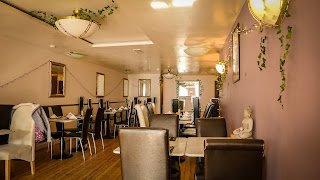 Back to the present, and the interior of Karma Kitchen looks much as we remembered Latif’s, which is to say, charitably, in need of some updating. We settled into our slightly knackered leatherette high-backs and considered an eclectic lunch menu. 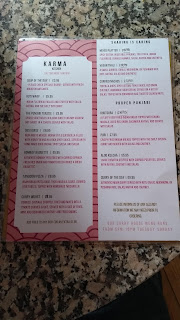 Alongside a few curries, thalis and breads sat worryingly transnational offerings such as curried nachos, Bombay Baguette and curry wurst. We elected to share a thali platter between us, adding in a puri (fried flatbread). And a tandoori pizza because why the hell not – it was the Bigg Market after all. 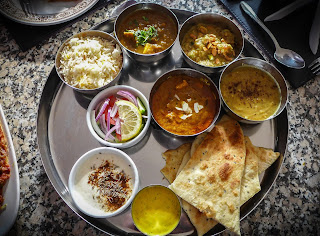 For £12.95 the thali was an awful lot of loveliness, easily a lunch for two. It consisted of a silver platter on which myriad silver bowls of fun vied for our affections.

A seitan Madras was excellent, full of deep, brown toasted flavours and with a level of spicing that made the next forkful an enjoyable rather than fearful prospect. Punjabi cooking often majors on rich gravies, so a comforting korma, presumably involving a lot of cashew in place of dairy, felt more appropriate, although similarly delicious. The tarka dal was a joy, the satisfying creaminess coming from proper cooking of the dried, split pulses themselves, while the spicing gave the dish both richness and freshness all at once. Perfectly adequate rice and naans provided ballast and scooping material, while a mustard seed-flecked yoghurt, which evidently wasn’t actually yoghurt - cashews again? - soothed. 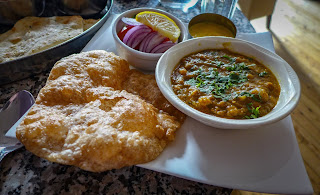 The puri was a dinky golden pillow, flaky, bubbly and light all at once. I hardly noticed the calories. We quickly tore it apart, swooshing it through its excellent accompanying curry, this one a sultry chickpea number the colour of burnt umber. A good whack of cumin seemed to be just about the dominant voice in yet another compelling choir of spices. 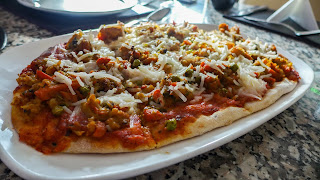 The wildcard tandoori pizza was, perhaps predictably, nowhere near as much fun as anything else, featuring a rather sallow dough, unspectacular tandoori sauce, potatoes, peas and “mozzarella” that sat, unmelted, where it had been scattered. I still await my first pleasant experience of vegan “cheese”.

This last dish emphasises what is, for me, the moral of the story. Good home-style Indian food, featuring long-cooked onion-based gravies, vegetables, lentils, breads and the odd outbreak of seitan (if you really insist), is perfect for those who prefer their dinner never to have had a face or a pulse. It’s when you start doing things that are meant to resemble something they can never be that everything gets a bit squiffy, in this carnivore's humble opinion.

I know that, as a devourer of flesh, it isn’t my place to pass comment on your vegan choices but, cliché though it may be, if the day ever comes that I turn, my cupboards will be chock full of all the spices, herbs and other good things that made this meal work, not the ingredients of fake pizza.

Though the restaurant itself still bears the tired vibe of its predecessor – if nothing else, they should really take down the “world’s hottest curry” signage outside - staff were absolutely lovely. Booze-wise, I think they may have been shopping at Aldi: I was happy enough to recognise a bottle of inexpensive but perfectly enjoyable Douro, which at least kept us refreshed for the duration.

We left feeling none of the dyspeptic despair that had characterised the dark hours following our previous dalliance with this address. Quite the reverse. This was a lovely meal that raised our spirits, setting us up for an evening of spirit elsewhere.

That, like the foul-tasting naga-bomb the pal consumed all those years ago, is another story for another day. Were we called to our doom, like ancient sailors, by the siren-call of Popworld? Never you mind. All you need to know is that, vegan or not, Karma Kitchen is doing lovely things that, should you order wisely, I’m sure you’ll really enjoy.