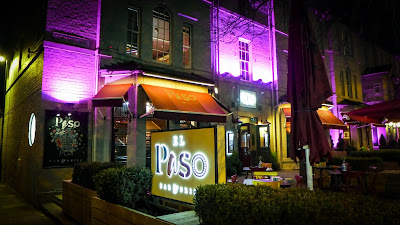 
I am not so completely naive or romantic as to believe that all restaurants should make every single item from scratch. Some things that come in jars or cans are perfectly reasonable additions to the larder. A local baker may be turning out loaves that are so good you’d be daft not to buy them in; I've been served bought-in tiramisu that has made me cry (admittedly made by an ancient Sardinian in the next village, but bought-in nonetheless). But at some point the opening of a packet becomes an expression not of sensible economy but old-fashioned laziness. If you claim to be a Mexican restaurant, that packet is the one that contains corn tortillas.
It’s a shame El Paso couldn’t be bothered to make their own because some of the things they put on their tortillas were actually rather nice. However, the cold, gummy, flavourless discs of total lack that they used as the basis of their “signature tacos” sucked the life out of everything around them, like grain-based black holes. Our waitress, who was loveliness itself, looked a bit sheepish about them as she confirmed their origin. The chefs hadn’t even taken the time to heat the wretched things up on a grill or flat-top. Ho-hum. 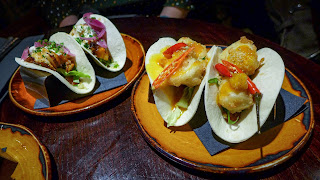 The aforementioned Tacogate epitomised a meal that occasionally raised our hopes before dashing them on the rocks of ineptitude. If you could ignore the sad cold discuses at their base, you'd have enjoyed the classic combo of nicely seared chorizo and tender nuggets of monkfish, given some spice by a chipotle mayo. A fried cod taco was also nicely done, although what the “Mexican crumble” consisted of remains a mystery. Blackened prawns were given freshness by a crumble of feta and some zip from nicely pickled pink onions. 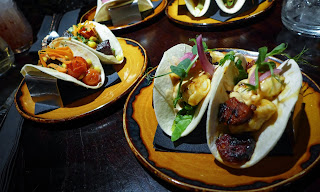 A vegan taco of “blackened beets” had good roasty, earthy flavour.  But if you’re going to put something on the menu  called “Almost Death” carrots with a warning skull next to them, they ought at least to be a little spicy. These were not. Almost death? Barely alive, more like. 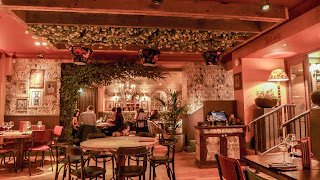 Waiting for our mains - sorry, “latino tapas” - to turn up, we had a good scan of the place. El Paso, part of the Malhotra Group-owned New Northumbria Hotel, used to be Scalini’s. I may have eaten there but don’t really recall it, which is probably why they changed it up in 2018. Interior-wise, they’ve really gone for it. There are skulls and other assorted signifiers of Mexican-ness everywhere, set against a good deal of fake plants and shabby chic. Top marks for effort, even if, to be charitable, it wasn’t quite to my taste. 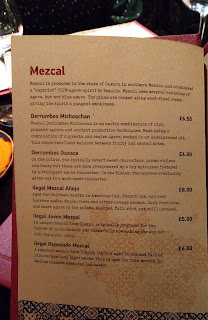 More to my liking, and top marks again, for a decent choice of mezcal. This fascinating spirit - basically a more interesting version of tequila, although there’s more to it than that - is getting the recognition that the craftsmanship of its production deserves. 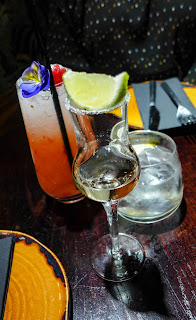 I find the smoky ones, like the Ilegal Reposado I tried here, go wonderfully with a range of food. This stuff is for sipping though, not downing with salt and lime like its less prestigious cousin. Someone should tell the bar staff at El Paso, I thought, as I wiped the salt off the rim of my glass. 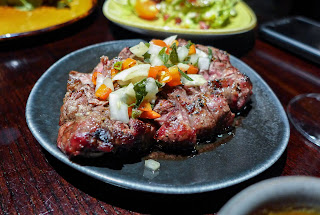 More plates arrived, stacked in little triple decker frames, because presumably some people think things like that are just such FUN. They veered wildly and confusingly from “yeah, this is pretty decent” territory, to the badlands of “bloody rubbish”. From the first category, £8.50 bought us a bit of ribeye steak that had seen enough heat to attain some flavour-generating char and was topped with a roughly chopped chimichurri that did have some recognisable tang. 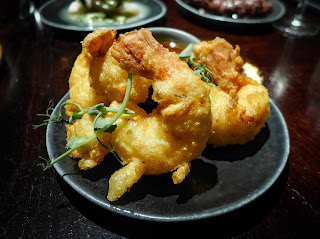 Tempura king prawns were, however, nothing of the sort - look, if you can’t see through the batter, it’s not tempura, ok? - but at least they were big and juicy, and not overcooked. 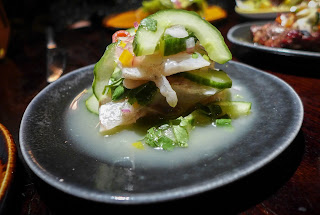 The Mexican ‘cerviche’ [sic] on the other hand was grim: old-tasting bits of sea bass languished in a puddle of liquid whose only discernible flavour was a strange bitterness. Ceviche should be full of acidic zip with a touch or more of chilli heat. Eating it should leave you feeling invigorated. This tasted like it might make us ill. 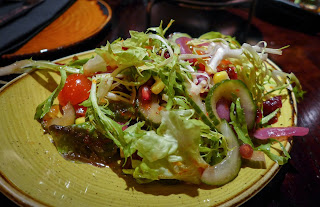 I sought refuge in the El Paso salad, which was supposed to be “a zingy and vibrant Latin salad” but turned out to be sad bits of frisée and other dull things dressed in what appeared to be some sort of sweet chilli jam. At £4.20, the profit margin on this one item must have been spectacular. 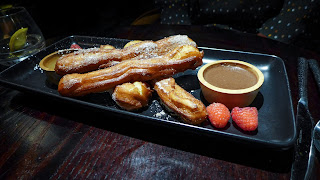 Some Churros were nicely fried, but came with a bizarre chocolate sauce that tasted of nothing whatsoever. I’m not sure how they managed this: it must’ve been deliberate. Even if a chef doesn’t really try, or is being a bit absent-minded, a chocolate sauce will generally end up tasting a bit like chocolate. 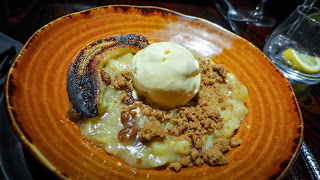 A banana, rum and raisin crumble was an uncomplicated failure: a vast and abysmal swamp of smooshed up banana, no rum flavour, some biscuity guff on top (the crumble, yeah?) with a half banana on the side by way of additional punishment. At £6.20 it was another victory for the profit and loss account but a terrible defeat for anyone with an interest in things that taste nice.

Our bill came to just over £91, with very moderate booze and no service included. In the final analysis, El Paso felt to me like a muddled, poorly researched and mostly badly executed attempt to grab the good people of Jesmond’s attention by offering something different. The problem is that by and large, it’s not. You can’t just bung the word “Latino” in front of other words on your menu and call it a day, as if that meant anything anyhow. There were some occasional outbreaks of decent cooking, the service was consistently excellent and it’s not an unpleasant place to be, but mostly it felt like an offering from the more straightforwardly cynical school of restauration.