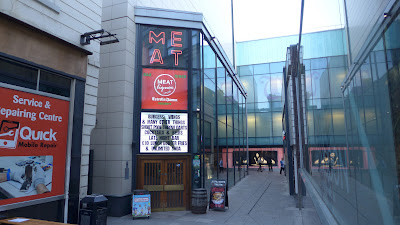 
I wonder how many punters at this Leeds outpost of MEATliquor are even hazily aware of the almost mythological origins of this burger chain?

Meetings in Peckham car parks, burger van thefts, a bollocks-to-it attitude and an awful lot of painstaking research went into making MEATliquor what it was, and is. These burger-slingers were among the first to do things that are now taken for granted in the food and booze game, from their origins as a food truck, their use of social media and the generation of buzz through word of mouth and food blogs which, back in 2008, were still something quite new and fresh. Simpler times.

What's even more impressive is that, on this evidence of this dinner, they’ve maintained the consistency. The food and the experience were as close as makes little difference to my recollection of my own burger epiphany at MEATmission in Hoxton, London six years, numerous openings and even a couple of closures ago. 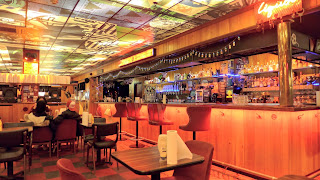 It feels appropriate to the grizzled, dive-bar vibe of MEATliquor that you should have to descend stairs to get into one, and that’s how it is in Leeds, even if being tacked on to the side of a shopping mall isn’t exactly rock ‘n’ roll. The cavernous space features a large bar on one side, with alcoves down the other, which contain dartboards. Shame I didn’t pack my arrows.

There is cheap-looking laminate, outbreaks of neon, and a low slung ceiling made of backlit tiles which look a bit like someone found a way to get a computer to randomly generate a massive Sex Pistols album cover. Each table comes with a generous supply of kitchen roll. But of course.

Everything arrives together, as ever it did, on massive silver trays. In itself this is an act of minor genius. My internal jukebox was playing a raucous fanfare as the vast platter of violently delicious looking fried things was plonked in front of us. 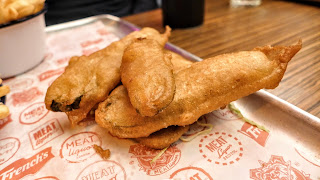 I’ve tried and failed to make good deep fried pickles, and had enough dud ones when eating out, to appreciate the MEATliquor version. How to get batter to cling to something so skinny and wet while not itself becoming soggy as the wet thing steams is a quandary for which they have found a masterful answer. Crunch and tang, crunch and tang. When swiped through their blue cheese dip, it generates instant happiness. 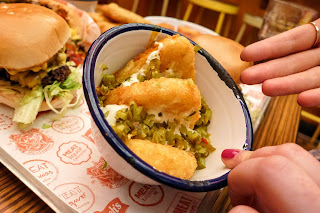 Just to shake things up a bit we tried something we’d actually not had before, a side called “hot mess”. This consisted of three large hash browns in a bowl, slathered with the aforementioned blue cheese sauce, buffalo sauce, jalapenos and pickles. It didn’t look like much, but it was deceptively heavy and ridiculously moreish, a reminder of the joy that occurs when spice, fat and acid are brought together as willing conspirators. 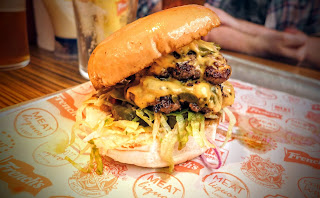 Yes, yes, but what about the burgers? Well, they’re still good too. I thought the bun on my green chili cheeseburger was maybe a bit over-firm, but other than that it was textbook. Juicy, cheesy, beefy, gooey, salty, fatty, with a bit of chopped iceberg on the bottom for the health of it. The trick to their burger is how they get the double patties so thin but still nice and pink, and the quick steaming which makes the whole thing cohere. And, unlike some of the nonsense you see which requires deconstructing prior to eating, these are good, sensible, practical burgers too. Messy, but manageable. 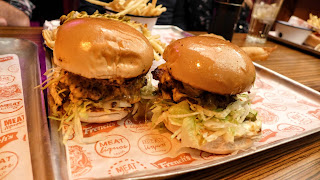 Mrs Diner went the way of the Dead Hippie burger, comme d’habitude. The sauce on that thing is amazing. Equal parts mayo, French’s and Heinz Ketchup? Maybe a bit more mayo? Is there some pickle juice in there? Whatever, it’s great. 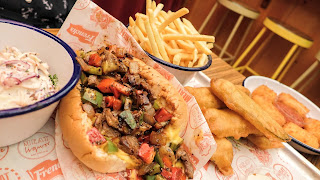 A friend ordered the Philly Cheesesteak, which was a riotous and righteous mess of chopped peppers and onions, sliced steak and, well, cheese. I tried it. It was good. 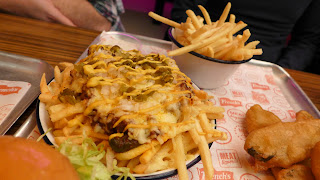 Their fries taste basically the same as that other burger shop, they of the golden arches, so they’re fine. They probably work best when used as a potatoey carpet upon which things are tipped. Things like blue cheese and buffalo sauce. Or beef chilli and cheddar cheese: the friends who went for the latter of these declared themselves happy. 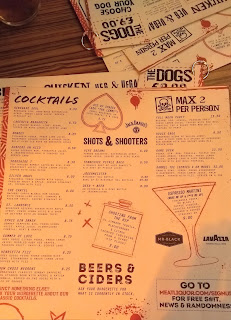 There was no way pudding was happening after all this. They do something called a filth pie: I’m sure you can imagine it. We drank some perfectly nice IPA from London brewer Crate, and were served by a friendly bloke from Wallsend. Fancy that. Impressively, considering how much animal fat we had consumed, none of us felt bloaty or rank afterwards, which was an unexpected bonus.

If this has sounded a bit like a paid-for puff piece then I do apologise. There maybe wasn’t quite the same pupil-dilating magic to this meal as there was to my first toot of MEATliquor in London, but then nothing ever tops that first hit, does it? In place of that initial thrill, there is now cap-doffing respect for turning something singular, disruptive and obsessive into a mini-empire. 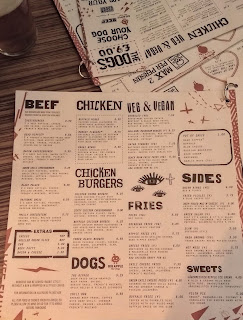 Did they sell out, or did they reinvent the mainstream, depriving all those half-arsed mid-range burger joints of their excuses for being so rubbish? Who cares. The menu may be way longer, and the prices a notch or two higher, but they’re still doing what they started doing all those years ago in the upstairs of a pub on New Cross Road: serving pretty great burgers in a place that’s fun to be.

As long as they keep that up - and don’t ever take the deep fried pickles off the menu - I’ll keep coming back.

Email ThisBlogThis!Share to TwitterShare to FacebookShare to Pinterest
Location: Leeds LS1 5AT, UK