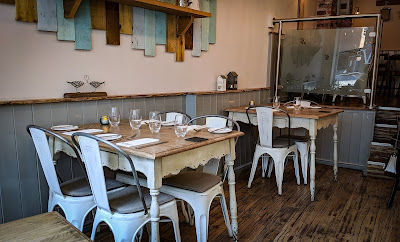 
If you can grab it, the window table on the lower floor of Abbie and Kenny Atkinson's Violets Café affords some of the most startling and evocative views that Newcastle has to offer. I’m not talking about the many architectural glories of the Quayside, nor even of the steel and granite heft of the Tyne Bridge itself, although these are both visible from that perch. No, I’m referring to a rather more sociological vision. And, now that Violets is open into the booze-filled evenings, it’s even wilder than it used to be.


Over 90 or so minutes, we witnessed scenes of comedy and tragedy, drawn in the vibrant, unapologetic brush strokes of real life. It was like flicking through a Beryl Cook calendar. The Akenside pub periodically belched punters out onto the street; one such couple fell over, as if in slow motion, before clambering into a waiting cab. I pitied its driver.

Another couple, dressed inexplicably as members of Kiss, came staggering down Queen Street. A squad of charvers with massive German Shepherds, swigging from cans of Monster Energy Drink (the charvers, not the dogs) dodged a homeless chap wearing a sleeping bag as a scarf, while camera-toting Asian tourists - what must they have thought of it all? - mingled with stag and hen parties. It was like peering into the busy departure lounge for Purgatory. All this and more at 8pm on a Sunday.

But zenith-grade people watching is not the only reason to visit Violets of an evening. I’ve reviewed its excellent brunch and afternoon tea before. But back around March they discretely opened a dinner shift on Thursday through Sunday (until 8.30pm), offering a menu of small plates. 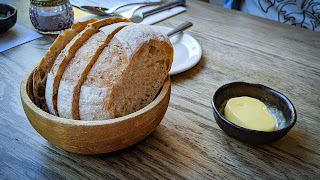 I knew nothing about it until a few pics popped up on Twitter and Instagram, but it all looked good, like (only slightly) simpler versions of House of Tides dishes. The evening offering at Violets is one of those lovely lists the length of which makes it easier to say what you don’t want rather than what you do. Other than a broccoli velouté, and a cod dish, we ordered the lot.

The menu has also been sensibly thought out, offering a really pleasing variety of meat, fish and vegetable dishes that showed off an impressive range of techniques. 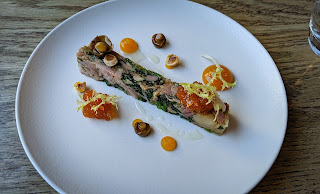 We started with a pair of pressings, one of potato and goats cheese, the other of duck. Both were rather lovely, and not served so cold as to negate their flavour. 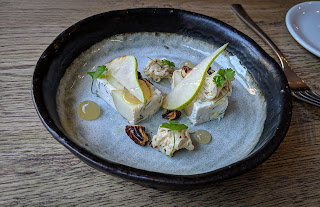 The latter came with pokey little dots of apricot gel of almost unnatural smoothness, clearly aided by some fancy-pants kitchen gadget or other, with wisps of endive for bitterness and hazelnut for crunch. 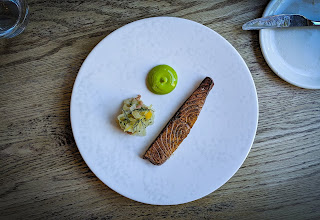 Two plates of fish were as pretty to look at as they were good to eat. A minimalist tranche of salmon had been lightly cured, then blowtorched. This had the effect of applying a recess shade of char marks, making the flesh’s natural patterns stand out like the contours on an OS map. The dill purée had a remarkably pronounced flavour, while a dinky fennel salad provided refreshment. 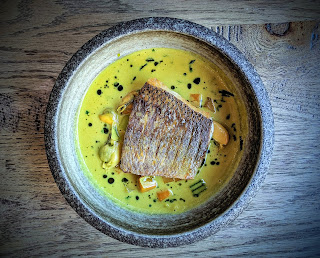 An impeccably cooked bit of sea bass - crisp skin, flesh just warmed through - came in a bowl of frankly phenomenal curry sauce that was airy-light and devastatingly rich all at once. Plumptious mussels, full of flavour, were bobbing in its turmeric-hued depths. This, seasoned within an inch of its life, was superb. 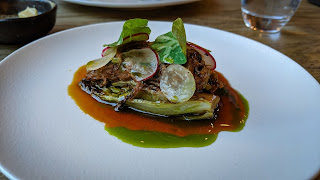 On to meat, and another pair of first-raters. Lamb, cooked down to the point of tangled collapse, came with charred lettuce, a sauce as shiny as parade-ground boots, and a few bits of nasturtium leaf for freshness. 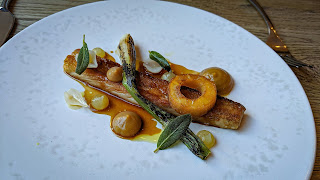 A slender length of pork belly with a lovely crust was accessorised by dods of onion purée and apple gel, pieces of onion so small they must have been grown by fairies, and crisp sage leaves.

That all this multiple-element loveliness came out of Violets’ dinky little kitchen is an achievement of mise en place, organisation and resourcefulness. 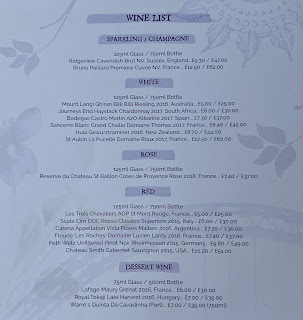 Their booze game is strong too. Mount Langi Australian Riesling and Peth Wetz Pinot Noir from Rheinhessen in Germany were both delicious, and way more interesting than your standard by-the-glass offering. 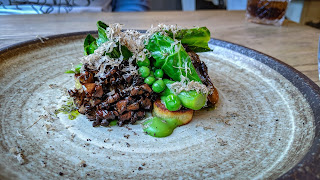 Our last savoury dish was a standout. A generous cluster of hen of the woods mushrooms had been, presumably, basted in acres of butter before being plated with asparagus, peas, dinky herb gnocchi and a thorough microplaning of unusually good summer truffle. Wiltshire, apparently. The meatiness and earthy flavour of the mushroom itself was a joy. 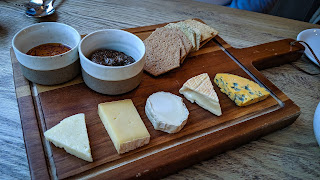 I was reading a bit of Brillat-Savarin the other day and he was saying dessert without cheese is like a beautiful woman with only one eye. That would probably be considered a bit of a sexist thing to say nowadays, but I took his advice anyhow and we were rewarded with some lovely stuff including Isle of Mull and Admiral Collingwood. A waitress tried to convince me the latter wasn’t produced by Doddingtons, one slip in an evening of otherwise attentively professional service. I elected not to argue the point. Attention to deets: the saffron honey and fig chutney were both great. 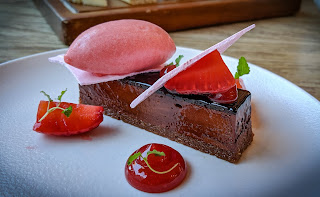 As was the one pudding we shared, a dark chocolate pave which tasted basically the same as the one I’ve enjoyed at House of Tides. Which is to say superb.

This takes us neatly on to an interesting point. I had assumed that this would be a sort of HoT-lite, perhaps somewhere for Atkinson’s chefs to test their mettle before moving up to the more prestigious restaurant round the corner. But in fact it seems that the key staff here have in fact come in the other direction. And it would also be doing a disservice to the meal we had here, which was a real delight on its own terms. 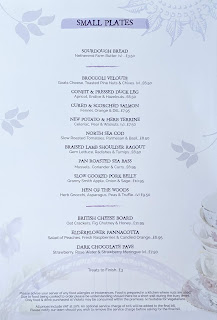 It’s not cheap - our bill came to a whisker under £130, including service and drinks - but then we did order nearly everything. I’d say it’s very fair value; your mileage may vary. It did feel a bit odd eating all this stuff in a room that possesses the shabby-chic stylings of a (very nice) seaside café, but hey: who cares. 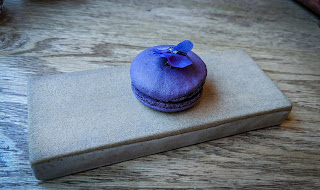 We ended with a perfect macaron flavoured with - what else? - violet, which neatly summed up this meal: extremely pretty, near-flawless technique and just really, really tasty. 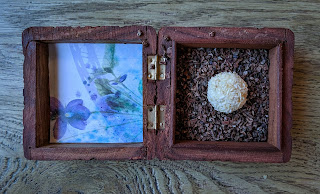 Whether you’d like to get a sense of what Atkinson’s food is all about without paying the Michelin-starred bill, or just want a really lovely meal to enjoy while you watch the human traffic do its thing on a sultry weekend evening, Violets by night time comes highly recommended.