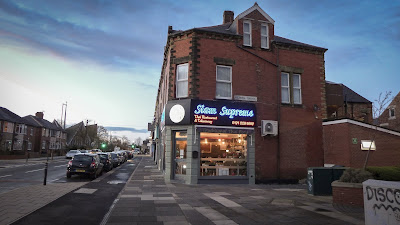 
I am fortunate enough to have lots of nice meals out and most are comparatively easy to write about. I just open my trusty Concise Oxford Thesaurus at page 799 (the one with the entry for “tasty” on it), prattle on about the interior of the place for a bit as if I know anything about interiors, bish, bash and indeed bosh, and there you go.

But how to string together a thousand or so words on an experience that was neither triumphant nor indeed utterly disastrous, but - ye horrors! - just disappointingly mediocre? Not terrible but just very meh? I imagine that would take some skill, some deftness of touch, perhaps even a little talent. I’m not sure if I’ve much of any of those, but we’re all gathered round the metaphorical campfire now, so what the hell. Let’s give it a go.

A couple of things make me feel the need to be polite and deferential on this occasion, even as I’m dishing out the downwardly pointed thumbs. Siam Supreme on Heaton Road had been recommended to me by several readers and spent a good long stint on the “to do” list before I got round to it (several months, in fact, and even longer to actually publish). This had given me cause to hope it would turn out to be that rarest of birds, a true off-piste neighbourhood gem.

Secondly, the chap who looked after us was just ridiculously nice. So, really, I’m sorry. 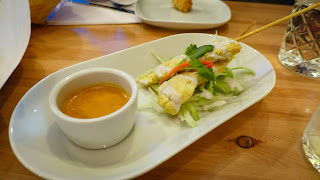 I’m sorry that the chicken satay was deeply underwhelming, comprising two skewers of weirdly tough, pale and dry bird (breast rather than thigh, grr) which tasted a bit like they’d been cooked in a microwave rather than over coals. Neither the drab peanut sauce nor the scatter of iceberg lettuce on which they perched could solve this particular crime. 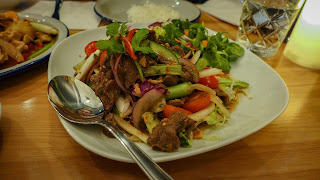 I must apologise too for the fact that I cannot say anything especially positive about a spicy beef salad that had none of the wonderful, fearsome pushmi-pullyu spice-sour-sweetness of the best Thai salads. It looked more like a chopped up bag from the supermarket round the corner, majoring on flavourless tomatoes and lamb’s lettuce. What is the point of lamb's lettuce? I have yet to find one. The slices of beef provided scant reward for the effort of their chewing, the dressing lacking any kind of heat or tingle. 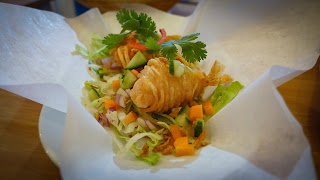 In better news, deep fried stuff was pretty decent. We ordered king prawn spring rolls mostly because of their name: “Dancing Queen”. Sadly the influence of the Swedish hitmakers was very much absent from this dish, consisting as it did of two crustaceans on a bed of more boring chopped salad. They were outwardly crisp and inwardly sweet though, so all was not lost. 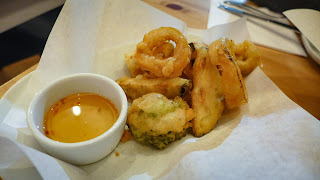 Some deep fried “tempura” (close, but no, not quite) vegetables including broccoli and sweet potato were nicely fried, but their sweet chilli sauce was nowt spesh at all. 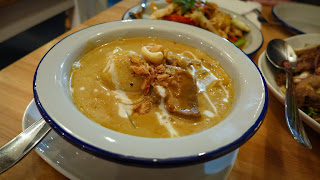 My Massaman beef curry was by some distance the better of the two main courses. It had a nice sauce with some complexity to it and the potato bobbing in its beige depths was nicely cooked. However, the gravy was nowhere near as rich as the best examples of this Thai/Persian classic, and the cut of beef used was insufficiently fatty or gelatinous enough to stand up to a long, slow cook. 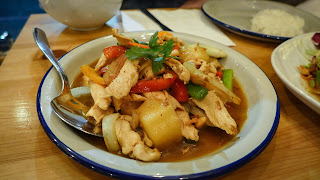 I’m not sure whose grandma the stir-fried chicken with cashew nuts is the “secret recipe” of, but I’m afraid I wouldn’t have felt left out if she’d kept it to herself. This tasted more like something knocked up by an undergrad with a jar of sauce, not the passed-through-the-generations heirloom of a family from the old country. Plus, the chicken was tough again. Why are they using breast meat, at least without having done any Chinese-style velveting of it first?

But, like I say, the fellow who brought us all this was hospitality itself. We nodded and described everything as “fine” whenever he came over to ask. I hadn’t the heart to run through the litany of issues as my sense was that these were not the consequence of an off night, but just how things roll round here.

We ended up spending just a touch under £60, with no dessert, a bottle of “Leo” Thai beer for me and soft drinks for Mrs Diner. There was a steady flow of folk picking up takeaways from the functional room in which we sat.

If you live anywhere near Heaton, and like your food, then I’m assuming you already know Siam Supreme and have your views on it, and therefore don’t need mine. For the rest of you, I say that if you want a rather poor Thai meal served by one of the friendliest waiters you’ll ever come across, this is the place for you. Otherwise? Not so much.