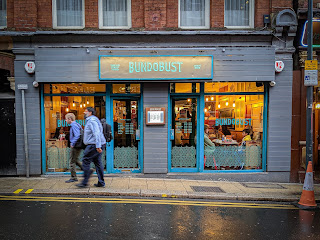 
Much as the nastiest jokes tend necessarily to contain a grain of truth, so some of the grimmest ideas have just a whiff of genius. Take, for example, the peculiarly Anglo-Saxon cultural practice of getting severely pissed-up on poor quality lager before laying siege to a phall in the local curry house. I can scarcely imagine a more despondent or dyspeptic way to spend an evening.

And yet, there’s no getting away from the fact that, occasionally, spicy food and beer can improve each other in a rare, alchemical fashion. When both are of the proper type and quality, magic can occur. Which takes us to Leeds, and to Bundobust, where the beer is craft and the food is street. Yeah, I know. Roll your eyes all you like, though, because they've got it absolutely nailed. 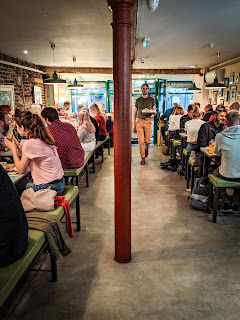 As soon as you walk in it's clear that this is not somewhere to get comfortable and linger. The hyper-friendly staff find you somewhere to perch whereupon you dump your possessions and head to the bar to grab drinks and place a food order. Want more food or drinks? Get up again, lazybones.

The whole place is a study in DIY functionality. The seating triggered memories of A-Level Chemistry. Only some of it benefits from the relative luxury of padding. Walls are variously bare brick, painted pink or made from repurposed doors. There's a sort-of outside bit, where a lean-to roof is your only protection against the elements and where joss sticks burn. The music policy is varied, but tends pleasingly towards disco. It's buzzy and sociable and fun.

Then your food arrives, and the fun gets serious. The fact that Bundobust started life as a served-out-of-a-van collaboration between Bradford-based Sparrow bar and restaurant Prashad was emphasised when everything arrived in cardboard punnets, and by the cutlery all being disposable. This felt less than completely sustainable, until the side of a container of food told me all their potsa and cutlery are plastic-free and compostable. So there. 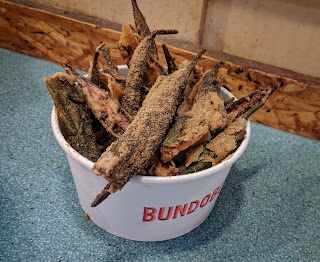 None of this would in any case have made any of it any less delicious. Okra, so often so slimy, came as crisp lengths of lightly battered vegetal goodness, pepped up by a tangy mango powder. Had they been dried before frying? Whatever: they were delicious. 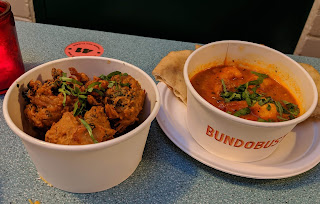 Bhajiis came full of the canonical onion, but also featured kale and broccoli for added texture and interest. They were perhaps a little doughy in the middle, but the puddle of sultry tamarind and pepper chutney on which they sat resolved that minor crisis with aplomb. 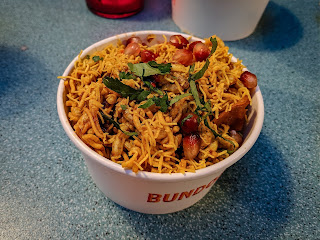 Bundobust's bhel puri is exactly as it should be, which is to say a delightful mess of crisp fried bits of samosa pastry and puffed rice, slathered in tart tamarind. Pomegranate seeds added bursts of astringent freshness.

The beers on offer go well with this fried stuff, and how. When in Leeds and all that, so I stuck to Northern Monk offerings, it being both walking distance from the restaurant and a very fine brewery. Bombay Dazzler is a collaboration with Bundobust themselves, a Witbier with maybe some orange zest and definitely some cardamom in the recipe. Even better was an esoteric Grape Soda IPA whose fizzy-pop sweetness did wonderful things with this food. 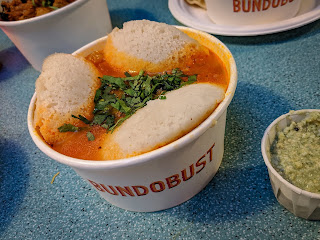 Like the idli sambhar, which saw three steamed rice cakes bob like dumplings in a light broth of lentils and aubergines. Or the Paneer Kasai, where cubes of the clean-tasting squidgy cheese had been set against an intense gravy, singing with cinnamon, with flaky, fried bhatura breads to mop up the whole business. 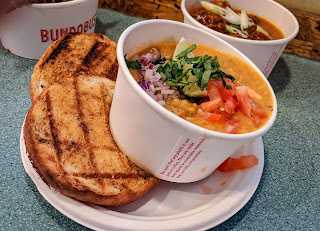 I loved the pav bhaji. This featured a smooshed-up mix of long-cooked cauliflower and potatoes with the not-cooked-at-all fresh hit of raw onions and tomatoes, which you piled onto the accompanying toasted brioche bun. A glorious garam masala-powered mess. 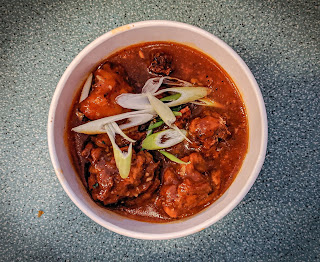 As was the enjoyable smut of a dish of gobi mushroom Manchurian, which had nothing to do with Denzel Washington and everything to do with deep fried blobs of mushroom and cauliflower, lashed with a sauce featuring the saltiness of soy and thickened with cornflour to a consistency of moreish gloop. Wonderful. 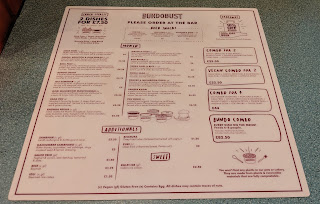 Have you noticed that none of this contained any meat? I didn't. Or, more accurately, I didn't miss it at all, on account of everything being so damn tasty. I've said it before: if I ever should cross the vegan Rubicon, spice will be my solace and companion. The most expensive item on the menu is £6.50, and three dishes make for a good meal. You can have an excellent time here for around £25 per head, with a beer or two.

You won't pay any service - or are at least unlikely to - as you pay for your food up front. Therefore there's no need to hang about when you're done. This, along with the placky cutlery, paper plates and speedy service of a limited menu keeps the punters flowing through nice and quick. They've got their business model absolutely sorted, but in a way which, admirably, feels like it's working for everyone. If you want your whole night to be about your meal, go elsewhere.

If you want delicious food and good beer before heading off to do whatever else your evening consists of, look no further. I should, for full disclosure, say that circumstances brought me to Leeds without Mrs Diner, either the real one or a stand-in. Some people don't like dining alone. I'm fine with it, provided I've a good book about my person. The thing is, Bundobust did the job for me as well as it did the couples and big sharing tables. On a weekday evening it was heaving with a veritable smorgasbord of different punter profiles, which only made it seem all the more jolly.

There's a Bundobust in Liverpool, and Manchester too, although the Leeds joint is the original. Lucky you if you live in any of those places. Me: I felt a long way from the Bigg Market. I didn't see a phaal anywhere on the menu, and thank goodness for that. Spicing was set at mild-medium throughout the dishes. This is still very much curry and beer though, just brought up to date and made better. Much, much better.