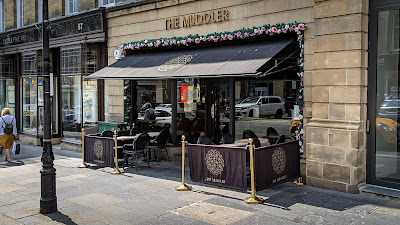 
Danieli Holdings is, or are, in their own words, “one of the fastest growing multi-faceted privately owned business [sic] based in the North East of England”, with care homes and security firms alongside their leisure “division”.

I have no particular problem with big companies, or even with companies that do more than one thing. I am neither an anti-capitalist nor a starry-eyed believer that a good restaurant must of necessity be independently owned. However, you also can’t blame me for noticing that I’ve frequently struggled to find a half decent meal in the restaurants of companies like Danieli.

Never heard of them? Try Bar B in The Gate. Or YOLO in Ponteland (see my rather scathing review of their High Bridge Branch here). Or the (rather better) shipping containers on Pilgrim Street. There you go: of course you know Danieli Holdings. My latest attempt at a decent Danieli meal was at The Muddler on Grey Street, where on a pleasant Sunday afternoon Mrs Diner and I took a friend to help us lay siege to their Pan-Asian offering. 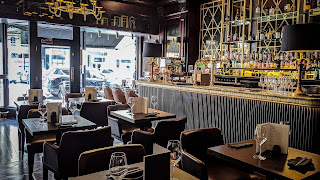 The restaurant is on the site of what used to be the Japanese outfit Osaka. By the way, if anyone knows where the chef who used to make the spiced beef broth there ended up, let me know; I’ll be forever in your debt.

Back to the present day, and significant moolah has been lobbed at the interior of The Muddler, transforming it into a sleek room where dark woods and leather contrast with polished brass and burnished gold alcoves, with all manner of geometric Art Deco action going on. It’s not exactly my taste, but aided by some classic soul tracks on the stereo, it was a nice enough place to be.

The menu is big, offering mostly small plate dishes with recognisably Japanese, North Chinese, Cantonese, Korean and Thai influences. In these times of heightened cultural awareness, you may think it a bit daft to have a restaurant attempt to cover off the food of approximately 4.5 billion people. Especially when what it boils down to is essentially a lot of samey tasting soy-dominated dishes of questionable value. 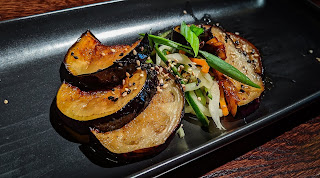 None of the agedashi tofu, grilled aubergine or kimchi chicken were awful, but none really sang either. The dominant flavours were sweet and salty, whereas what was really needed was a bit of acidic lift. 6 weensy slices of aubergine at six quid felt not so much steep as vertical. 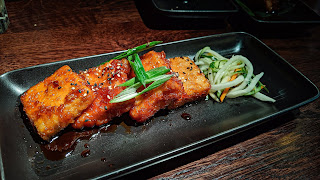 The tofu was not crisped as it really ought to have been, probably thanks to it having been doused in soy/mirin instead of the sauce being offered on the side. 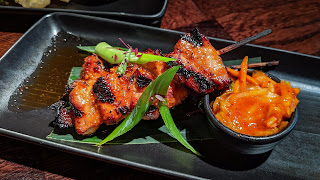 The kimchi that came with the chicken was a good one, bright, spicy and tangy. However, this was the only high point of the meal and the uniformity of veg it contained left me wondering whether the kitchen could take credit for it. 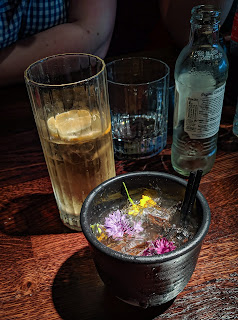 The place is named for the pestle-like implement that is essential to the bartender’s craft, so we tried a cocktail from their list of updated classics. “Rose in the Mist” was a rather lovely thing, the rose flavour kept in check, not overpowering the sake-infused gin on which it was based and of which a splash more wouldn’t have hurt at all. It came billowing dry ice-powered vapour, which the kid in me still finds fun. Just remember not to eat the stuff, yeah? 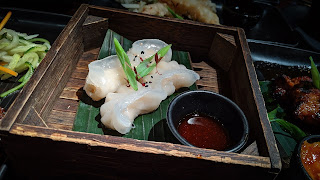 Food kept coming, and missing the spot. Prawn har kauw dumplings were stodgy lumpen pellets of slightly overcooked prawn, whereas they should be light and succulent. 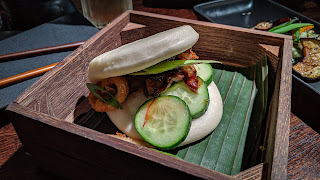 The bun on their crispy duck bao was more leaden starch, and the duck was no more crisp than I am a ballerina. 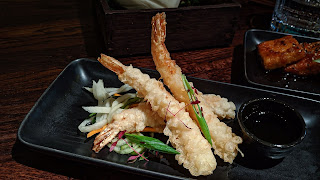 Further textural issues were encountered when biting into their prawn tempura. At first they looked the part, but didn’t bear closer scrutiny, lacking the necessary brittle crunch. 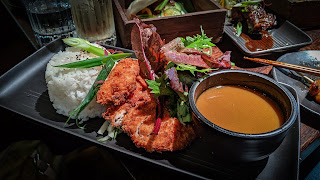 Chicken katsu curry sported a nice enough sauce, but was a rather dry and unwieldy fillet of bird. 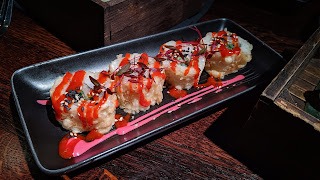 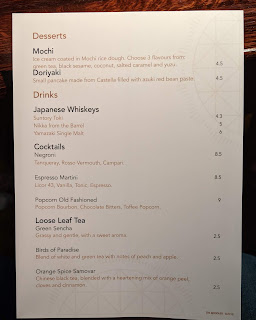 There were two desserts, but there was little evidence to support the claim that they would be worth the calories, so we let them be. Service, from the one waitress/barmaid on duty was all charm and competence. The bill came to a whiff over ninety quid for the three of us.

I was left not quite knowing who this restaurant is aimed at. They have plans to expand it, so clearly it is finding an audience. It is not, I would humbly suggest, for those with a keen interest in the vibrant flavours to be found east of Yangon. The menu is too big and too many dishes taste the same. 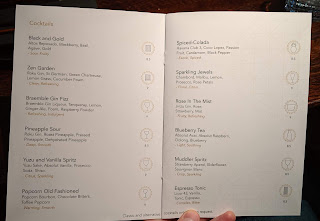 If you enjoy sipping interesting cocktails in a black and gold room, definitely give The Muddler a try. However, I understand that the terms of their license provide that they can only serve alcohol to those ordering food, which may put you off your martinis.

I guess I’ll keep trying Danieli’s restaurants as long as they keep opening them. I’m sure there’ll be a good one coming along soon. With any fortune it’ll arrive before I have any personal requirement to make use of some of the other services in their portfolio, such as Northridge Healthcare or Homecare Plus.