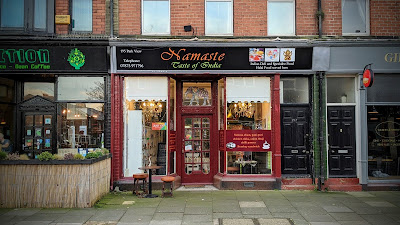 I had always vaguely known, but it was on an Indian cookery course many years ago that it was brought crashing home to me just how little subcontinental home cooking has in common with the Anglicised, vaguely Bangladeshi stuff we know so well from our own curry houses. The food we cooked and ate that day was relatively quick and simple, but completely delicious. No one-size-fits-all heavy ghee or cream-based gravies; the spicing was clear and to the point, with each ingredient contributing something worthwhile.
There was a glorious black urad dal and a fresh pea and ginger chutney; the type of stuff that Meera Sodha, has recently made a career out of championing. All well and good if you’re minded to break out the cookbooks and find a source of fresh curry leaves, but what of those less enterprising among our number who would like, at least once in a while, to hand over the reins to someone who really knows what they’re doing?

The Indian restaurant scene is still, for cultural and historical reasons dominated by that style of cookery described, rather uncharitably, by a friend of mine as “Bangla-filth”. If that’s what you’re after then fine, but what if you want to still be able to function after the meal? What if you’d like something a bit zingier and lighter? Well, most of the time, and in most places, tough luck. But not right now, and not in Whitley Bay. There you’re in business, because that’s where you’ll find Namaste Taste of India. 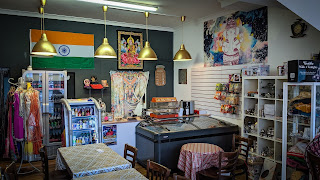 Namaste is the work of Sangeeta Chopra. Situated at the north end of the ever-more-interesting Park View, it’s part food and cooking supplies shop, part café. Siddhartha Gautama and Ganesha peered down at us from vibrantly coloured wall-mounted embroideries as we studied the dauntingly large menu, full of street food staples, larger dishes and thali platters.

We started with a couple of my favourite Indian snacks, both of which were a little bit adequate. 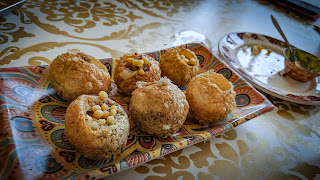 Pani puri, those crisp semolina flour orbs filled with spiced potato and chickpea and then spiced water and tamarind, were neither sufficiently spicy nor tart enough to really sing. When they’re good, these things are as addictive as hell. The version here was fine, but that’s all. 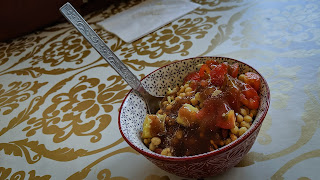 Same for the bhel puri, which I love for its combination of crisp puffed rice and sev, squidgy sweet chutney and citric tartness from the chaat powder, which often contains mango powder. These tasted like something put together using merely decent bombay mix and an unspectacular mango chutney, which isn’t quite the real deal. 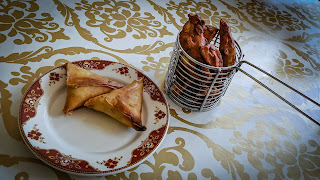 Things quickly shifted up a gear when we ordered  dishes that, given it took a little while to materialise, Chopra was presumably making from scratch in the kitchen out back. Pakoras, fresh from the fryer, were bursting with the kind of deep, slightly gamey flavour that comes from mutton rather than younger lamb, and masala fries were spicy and greaselessly crisp.

Part of the charm of this place is that Chopra seems to be doing it pretty much all by herself. There was a young waitress helping out who was friendly but not necessarily an expert on the food of the Punjab, that chunk of the northern subcontinent that had a line drawn through it in the partition of 1947. Chopra was a completely charming host, if a bit evasive when it came to questions on recipes and spicing; secret recipes, I guess. 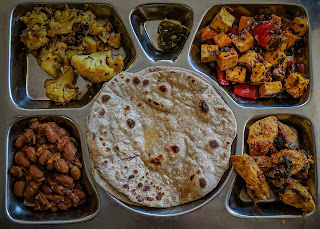 Mrs Diner and I settled the argument over which mains to order by sharing a large Maharaja thaali, a tray of four different dishes with chapati and pickle. Chilli paneer came in a lovely sinus-clearing sticky sauce with added pungency from plenty of nigella seeds. A chicken dish was rather dry, but was so full of flavour I didn’t much care, elegant spicing coming through in layers.

Elsewhere on the silver platter lovely things had happened to veg and pulses. Some kidney beans had been simmered slowly into a state of soothing creaminess with, I think, healthy amounts of garlic and ginger providing a savoury backbone. Forget turning cauliflower into “rice”, a “pizza base” or other such monstrosities; treat it as it was treat here, which is to say fried with turmeric, mustard seeds, coriander and a little chilli. The weather, just a few feet away from us, was a shade of soggy grey that we specialise in round here at this time of year. This food provided a much-needed vibrant counterpoint. All of this, with lovely warm chapatis and a dod of lime pickle, cost a tenner. It would make a good lunch for two.

Our total bill came to thirty quid with plenty of soft drinks and a few bits and bobs from the shelves of the food store. That is extremely good value. The menu is massive though, and I wonder whether the impulse to offer so much is preventing some of it being quite as good as it might be. The fact that Chopra is cooking herself also means that it’s not necessarily somewhere to pop into for a quick lunch on a whim.

Here’s how you win at Namaste Taste of India: ring up 45 minutes before you want to eat. Disregard the menu entirely. Ask what dishes are good today and get those on a thaali, with some bread or rice. Turn up, eat and then congratulate yourself for finding that rare thing: proper Indian home cooking, in a restaurant.