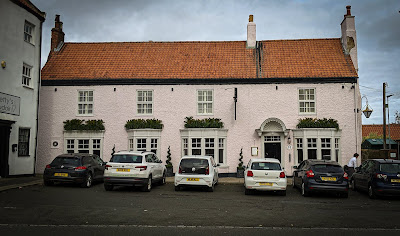 Sedgefield’s a nice spot, isn’t it? I can see why Tony Blair was happy enough to be parachuted in - sorry: choose to relocate - all those years ago. As we parked up opposite St Edmund’s Church on a Saturday afternoon that grudgingly offered some pale wintry warmth, everything felt comfortable, genteel and agreeable. It was all very... nice.

This probably helped to persuade Ramside Estates to plough a reported £1.5m - it’s always a big round number, isn’t it? - into refurbishing what used to be The Hope on Front Street and turning it into The Impeccable Pig, a restaurant with rooms. What they’ve done is very impressive, but also probably necessary for a venture of this size; with respect to almost everything about the place, they’ve found that magic sweet spot in the Venn diagram where the circles of quality, accessibility and affordability overlap. 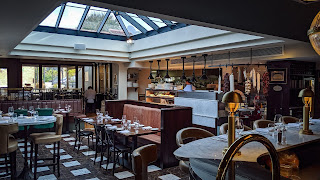 It's large, with clever seating arrangements that squeeze in plenty of covers without it feeling cramped. There are seats at the bar, corner banquettes, tables for two where you’ll perch beside your co-conspirator - I rather like this set up, it means there’s no kerfuffle about who sits where - as well as more standard square and round-tops. 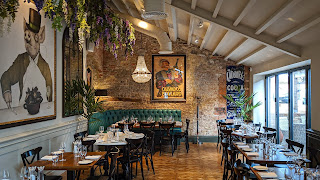 It is flooded with natural light and heaving with vintage posters and wisteria. The main restaurant is split over two levels, with a further private dining room upstairs. There are quite a few pictures of pigs, as I guess the name demands. It’s busy alright, but not offensively so, and there was a relaxed buzz about the place as it filled up over lunchtime. Extended families, young couples, new parents: this is somewhere for everyone, all at once.

As is the menu, which offered up nothing to scare the horses, but still enough interest for those with a bit of an interest in food. There are pub and bistro classics, but also satay of monkfish tail and an artichoke gratin from the Josper grill. There’s a good kid’s menu and another specially just for you vegans. A set lunch menu of three courses for £19 looked excellent value, but we were feeling lavish, so we à la carted. 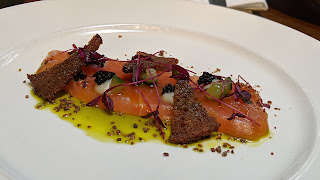 A long flattened cylinder of champagne and lime cured salmon did not taste much of either of those things, but was still rather lovely, both to look at and eat. Dark dabs of Arenkha caviar provided pops of seasoning and wisps of toasted rye bread gave it some crunch. Mrs Diner demolished it. 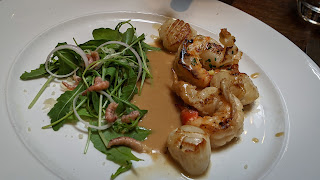 I had been unable to resist the retro charms of seafood napped with a Mornay sauce, in this case sweet, cream-fleshed scallops with just about enough char on them, and rather fine king prawns which had caught a touch of smokiness from somewhere, perhaps the Josper grill. Fine brown shrimp adorned a simple salad of rocket and quick-pickled onions. No rules or conventions were shattered in the making of either starter, but both were competent and tasty and that’ll do just nicely in Sedgefield, thanks. 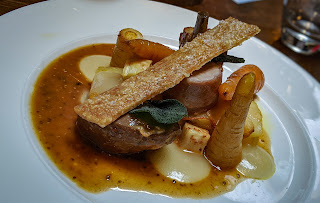 I felt duty-bound to order something porky from an establishment named after a pig. What I got wasn’t quite impeccable, but didn’t miss by far. Of the three porcine cuts on the plate, the loin was predictably the least exciting and the cheek could have done with being cooked a bit longer until it became a collapsey, gelatinous puck, but it still had good, deep flavour. The confit short rib on the other hand was a riot of fatty goodness. A neat rod of crackling, some phallic root veg (seriously, look at it!) and a successfully tangy mustard sauce rounded out a whacking good portion. The advertised dauphinoise was far more like boulangère potatoes though; nowhere near enough cream. Ditch a couple of elements and make the remainder truly excellent and this would have been a really fine dish. 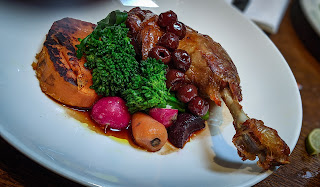 Mrs Diner’s duck confit was less enjoyable, if not a flat-out disaster. The joy of duck confit is in the contrast of crisp skin and rich, moist flesh. This didn’t quite have either, the former being a bit flabby and the latter a touch dry. The sweet potato fondant was far too big and not sufficiently interesting, lacking seasoning. It needed something sharper than its macerated cherries too.

Big thumbs up for the wine list, though; four sparkling, two rosé and six each of red and white by the glass or carafe, with vintages on display: that’s how it’s done, people. A delicious, peachy New Zealand pinot gris was lovely with the seafood starter and the cassis-laden Château de Parenchère 2015 Bordeaux was pretty decent Claret. Hurrah! 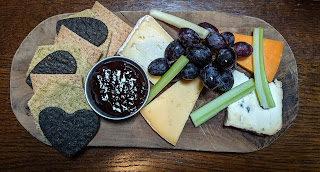 The latter went nicely with some fine cheeses from local Village Farm Dairy, which would have been even finer if they hadn’t been so recently out of the fridge. If it weren't so cold and hard, Mordon Blue in particular, would have been excellent. 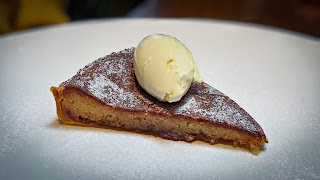 We both enjoyed Mrs Diner's slice of cherry Bakewell pudding and clotted cream, all short crisp pastry and frangipane squidge.

Service was youthful, friendly and on the ball, which pretty neatly sums up everything about The Impeccable Pig. Attempting to be all things to all people often ends up pleasing nobody in particular. Not here. This was not a perfect meal, but it was one that was extremely easy to enjoy. Most of the time this is more than enough. There is thought and skill and good organisation behind this place, and it appears from the outside to be a thriving business. It was a jolly nice place to spend the afternoon, and entirely at home in Sedgefield.