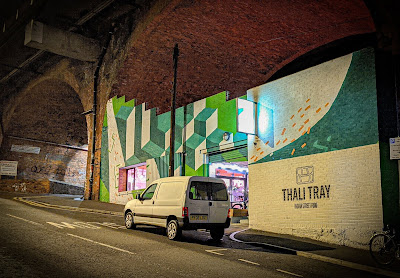 Where can you eat a curry in a brewery, followed by a pudding in a different brewery, followed by watching snooker’s Steve Davis perform in a leftfield electronica act, all without having to walk more than a few hundred yards? This might sound like some fever dream, but no, this was the shape my actual evening took last night as I tap these words out. So where was I? The impossibly cool Ouseburn, obvs.


For as long as I've lived round these parts, the Ouseburn has always been home to some excellent pubs. A very fine summer’s day could be spent flaneuring between The Cumberland, The Free Trade, The Tyne and The Cluny. But over the last few years things in the valley have really gone a bit next-level, with actual breweries setting up and opening their doors to punters, as well as a smattering of top-rate food businesses taking root.


Sometimes both these things happen at the same time, under one roof. This is the case at Arch2, where you can drink excellent beer from your hosts Newcastle Brewing Ltd, plus a selection of other breweries’ work, and eat Indian street food courtesy of Thali Tray. Remember a few weeks back when I reviewed the fantastic Bundobust in Leeds and concluded that we need one of those in Newcastle? Well, scrap that: it turns out that we’ve basically got it already.

The space in which all this is happening is pleasingly industrial feeling, being within the confines of an actual arch of the Byker Bridge. Traffic thunders just a few metres overhead, but, tucked inside the cosy bar, you’d never know it. There’s an outsidey bit too, with a firepit where you can take pictures of yourself toasting marshmallows for your 'gram feed, if you must. It was violently cold, so we resisted the temptation.

Ordering food was very easy, as there were three trays to choose from, with a smattering of smaller dishes with which to bolster them. Ordering beer was more complex, as there was a fine range on offer. The pal settled on a pint of Newcastle Brewing Ltd’s own New World IPA, while I tried a saison from London brewery Kernel, from whom - with the exception of a sour beer, all of which incidentally are the work of the effing devil - I’ve never tasted a beer I didn’t love. Tart, but not emetic, it went joyfully with the food that soon arrived. 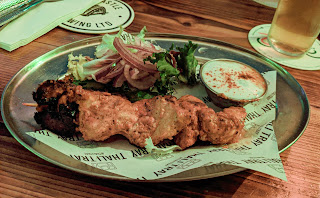 A couple of small dishes sounded a welcome fanfare for the excellence to come. A chicken tikka skewer was moist within and charred without, and had taken on plenty of its marinade’s flavour. 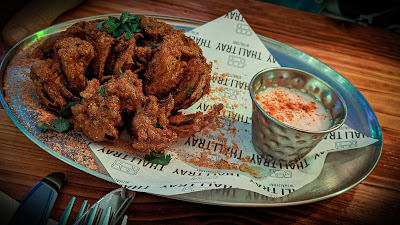 A “blooming” onion bhaji was a bit of a grease-bomb, but was also blooming delicious, having been covered in some particularly moreish blend of spices on emerging from its oily bath.

The amount of deliciousness that you get for your eight-ish quid when ordering one of their thali trays is quite something. Each comprises a pair of hot dishes, along with bread, turmeric rice, lime pickle and a tikka soybean skewer thingy, all dished up on a fetching silver platter, which is to say a thali. 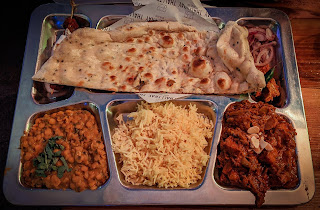 On my own, a chili paneer dish came in a rather wetter gravy than I had expected, but was no less delicious for that, full of long-cooked onion richness. A Kashmiri daal of toor, or “pigeon peas” was perfectly done, having a quite distinct nuttiness, the spicing mild and harmonious. 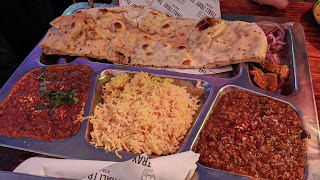 The pal was having just as good a time with his Keralan platter. Chicken and beef curries had been cooked long enough to present themselves in keema rather than chunk format. Both were rich from the addition of coconut, but had sing-song notes in the higher registers. I thought I detected something slightly tart, perhaps tamarind, in the beef curry. Was that a woody waft of cassia in the chicken one? Whatever: both were flat out delicious. Naans were pliable, rippable things and the rice was nicely cooked so that each grain was a distinct individual among the masses. Tremendous stuff.

Tables are fairly packed in and not exactly comfy, and in any case they don’t do puddings so we sauntered off, the rapid service having left us with plenty of time to seek out further pre-gig refreshments. We stumbled upon Brinkburn St Brewery which doesn’t look like much from the outside, but upon descending the stairs greets you with a fantastic large bar and restaurant space and has an amazing beer list and - hurrah! - sorted us out with dessert. 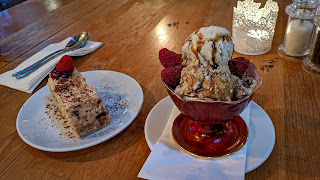 A beer sundae featured some really nice, malty ice cream, while a Christmas Pudding cheesecake not only tells you exactly how long ago we ate this meal, but was also richly decadent, if perhaps a tad light on the actual festive flavour. The whole menu is beer themed in one was or another which is an intriguing move, although one that makes sense given you’re eating it in an actual brewery. I will certainly be back to try out the rest of what they do.

For completeness I should note that the actual gig was not entirely to our taste. Steve Davis spent a lot of time plugging things in and out. It was hard to tell whether this was irrelevant or critical to the entire operation. Another lad got a set of bagpipes out at one stage. Nobody seemed to be playing in the same time signature. Still, credit to Davis for doing something genuinely interesting in his post-baize period.

If the music was odd and disconcerting, everything prior to it was anything but. Thali Tray and Newcastle Brewing Ltd are made for each other, and all of us. I hear they’re about to set up in the Bigg Market which, just like Ouseburn, seems to be getting cooler by the second. All power to them. I predict they’ll do brilliantly.