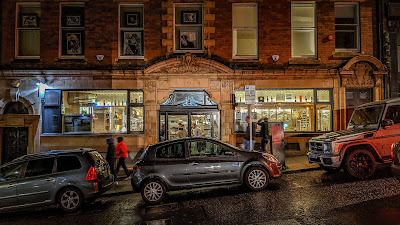 There’s a great episode of Seinfeld where Jerry is dating this woman who goes from being devastatingly beautiful to, well, far less so, from one date to the next. I think it’s also the one that has Festivus in it. And Kramer’s bagel shop strike. Man, that’s a good episode. But anyway, back to the point, because bear with me but it does have something to do with restaurants. This woman, who Jerry’s dating: is she good looking or not? What’s going on? Which is the real her?

These are similar to the questions I was puzzling over in relation to the tapas restaurant Kaltur on High Bridge after my second visit. The first time had been a triumph. Fine ingredients, excellent cooking, punchy flavours, fab wine list; it was all phwoar and blimey. I gave it 4 stars, declared it the best tapas in Newcastle and banged on about it to all and sundry.

But then I took Mrs Diner, who had been elsewhere on the occasion of my first visit, and it was rubbish and she questioned whether I’d lost my mind and my palate, as she pushed an unwanted portion of greasy and dull morcilla in my direction, raising a quizzical eyebrow. I felt a damn fool. Was this a good restaurant or not? What was going on? Which was the real Kaltur? 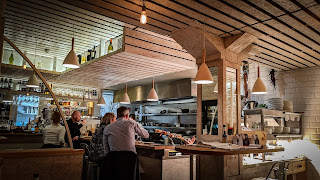 So when I got word of their second place on the site of what had been a fancy wood-burning stove shop, I mustered Mrs Diner once more to settle the matter definitively. Would Kaltur - ahem - set our world on fire, or splutter out miserably like so much damp kindling?

One thing not in any doubt is the quality of their wine and sherry list. The company behind these restaurants is a food and wine importer, so they have access to, and an interest in the good stuff. I tried an en rama - which is to say largely unfiltered - Oloroso which tasted of salt and sweet figs and brown butter and toasted nuts and was just stunning, while Mrs Diner drank a dryer and less dramatic, but still delicious Amontillado. 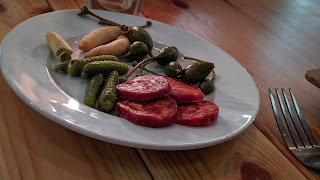 And then a small plate with some freebie caper berries, cornichons and slices of chorizo turned up and we were already having a good time. We moved on to a bottle of La Encina’s Merlot, a completely stonking natural wine from Albacete. 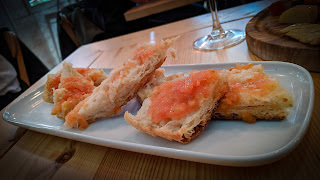 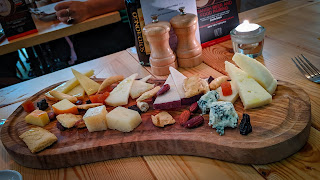 We ordered a twelve pound cheeseboard as a starter because we fancied it and we’re grown-ups so we can do more or less what we like, and got more than we bargained for; seven different cheeses, plus crackers, dried fruit and toasted almonds. There was some seriously good mature Manchego and a blue that was a study in creamy funk. We asked what it was. The waitress took some time to find out before coming back and announcing proudly that it was “blue cheese”. So, there you go. 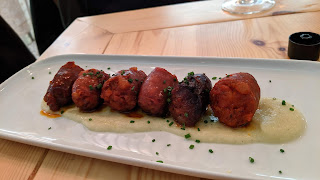 Chunks of good oil-belching chorizo had been cooked in cider which is nothing too radical, but serving them on garlicky cauliflower pil-pil was a more novel bit of fun. 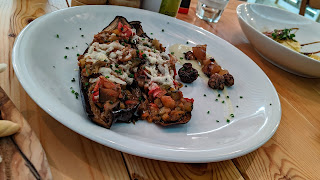 An encore of that sauce turned up on a vegetarian dish of roast stuffed aubergine which was a busy little thing; the rich ratatouille filling was pepped up by onion vinegar and salted mushrooms, of all things, with more cheese on top because who doesn’t like cheese on top of things. 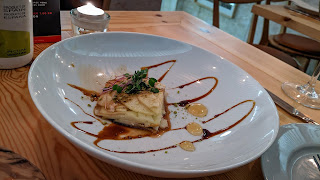 Another vegetarian dish, a mille-feuille of caramelized apple and goats cheese with a sweet sherry reduction was just lovely, and gone in a flash. 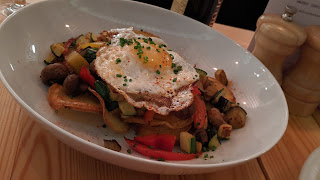 For ballast, we eschewed the canonical choice of patatas bravas in favour of a plate of stir-fried spuds and grilled vegetables crowned with a fried egg. Few things are quite so cheering as a good fried egg on top of something; it’s the banging donk of the culinary world. This was a very good one, crisp of bottom and runny of yolk. 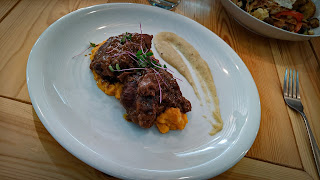 We finished the savoury bit with a couple of stellar dishes; much more Cosmo Kramer than George Costanza. A couple of iberico pork cheeks had been cooked down to dark, squidgy rapture in wine and cinnamon, giving an almost mulled quality to the meat. Roast pumpkin mash and creamed chestnuts completed a dish that suited the inky darkness outside to a tee. 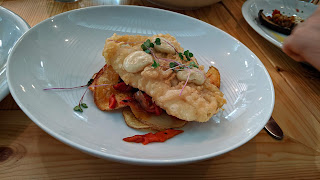 A healthy wodge of hake came sporting a light, greaseless coat of batter and perching on roasted peppers and some garlic fried potatoes that were like chunky crisps. A lime alioli brought some much needed zip to the thing.

Service, other than that rather tautological bit of blue cheese description, was good. Staff were personable and confident, making time for everyone despite it being fairly heaving on a busy Friday night. They even took it in their stride when the table of well refreshed ladies next to us managed to set their paper menu dramatically ablaze on their table’s tealight. I love a bit of kerfuffle.

It’s a nice buzzy place to be, too. There are maybe 18 seats upstairs and more down. They seem to have a real thing for unfinished OSB plyboard; whole chunks of the place are made out of the stuff, which gives it a pleasing, light woody feel, presumably without them having had to pay a fortune for premium timber. Fine by me.

The dud restaurant returned temporarily for our desserts. 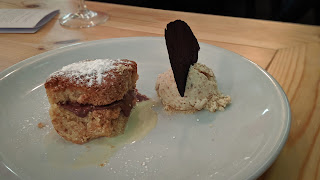 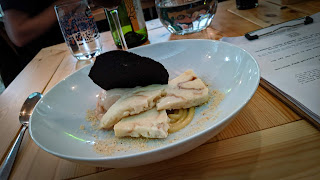 and the Calatrava Bread pudding were dry and lacklustre, tasting like they may have been rather better the day before.

But no matter: based on this fresh batch of evidence, I’m willing to bet that this late-game slump was the exception, rather than a case of regression towards the mean. We paid £130 including a tip and plentiful good-quality booze, which ain’t cheap, but this was a very fine meal. There were a bunch of things on the menu I’d have liked to have tried, but we were but two. Bring friends, and give this place a proper seeing to.

So anyway, here I am again, telling you that Kaltur do the best tapas in Newcastle and that you should definitely go. As Meatloaf himself once opined, two out of three ain't bad. I have no idea what was going on the second night I sat down to dinner on High Bridge. Whatever restaurant that was, I hope I don’t bump into it again.