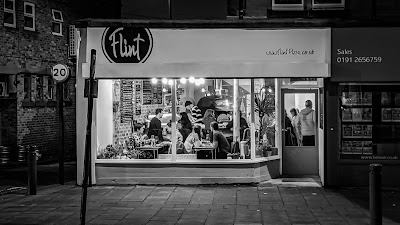 
Why is Neapolitan-style pizza the only one that anyone wants to cook nowadays? Or, more accurately, the only one that anyone wants to sell in a restaurant? It’s like someone deciding that all techno must henceforth be minimalist, or all indie be shoegaze. I mean, those are obviously the superior forms of their parent genres, but other technos and indies are available, and well worth a look too. Is it not also thus for pizza? Whither the Roman, Chicago or New York varietals?

Maybe it’s because - assuming your mise en place is in good shape, of course - you can cook a Neapolitan pizza and get it to the waiting punter in not much more than a minute or two. That’s handy when there’s a bunch of orders on, or when you need to turn tables. Maybe it’s because there’s a rulebook; the AVPN’s 14 page PDF gives pizza cooks a set of foundational shibboleths to either follow, grudgingly acknowledge or reject entirely. There is the fetishisation of the necessary kit, from the insanely hot oven to the wood that fires it to the ingredients, with their specified regions of origin. And, of course, there is the assertion that Neapolitan pizza is the original. Original is best, right? Well, maybe. 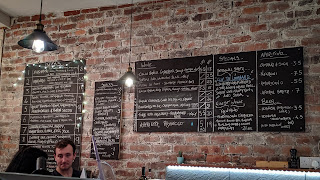 In any case, I’m not complaining. When it’s done right, this style of pizza is a joy. And joyfully enough, Newcastle is now blessed with three outfits putting up truly excellent pizza. For those of you who’ve been living under a stack of kiln-dried hardwood, these are the AVPN’s own Cal’s Own, the fast-growing empire of Scream for Pizza, and the subject of today’s missive: Flint Pizza on Chillingham Road. 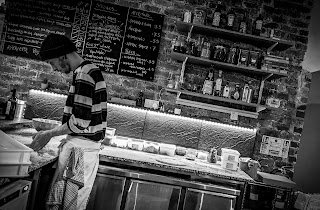 Whisper it quietly, but the meal we ate at the latter recently may even have been the most enjoyable of any we’ve taken at these fine establishments. The best? Oh, I don’t know about best pizza. Maybe not. Who cares? What I do know is that being sat at the bar in Flint with a glass of seriously good Nero D’Avola while your food is prepped just inches away and Junip is on the stereo is about as much fun as I need any restaurant to be.

The pizza was great; we’ll get to that. But so was everything else too, from the welcome from the hyper-friendly, knowledgeable staff, the starters to the soft drinks and wine to the puddings: these guys and girls have got it all sussed. And once your pizza has got over the "brilliant" threshold, service and ambience really matter. 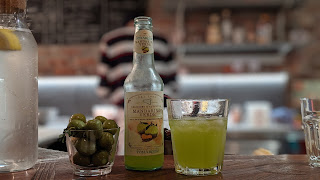 First rate nocellara olives were soon joined in front of us by sliced-to-order (they’ve got a fancy meat-slicer thingy) finocchiona salami and balsamic pickled onions. 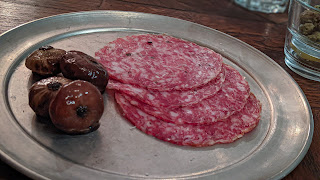 The fat in that salami was a vehicle for huge amounts of pleasingly funky flavour. 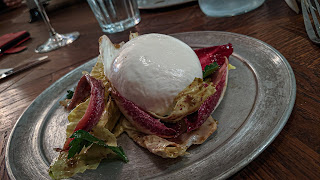 Another starter was a lesson in contrasts; a rich, milky ball of burrata was set against the bitterness of puntarelle and castelfranco leaves, and the saltiness of some almost violently good anchovies. The whole business was dressed in what I think may have partly been the oil from the anchovies. So simple, but, with a glass of stonking Catarratto white from Sicily, so very, very good. 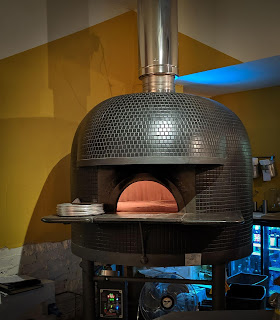 Right: pizzas. Purists and pedants might sniff at the fact that Flint are cooking them in an oven powered by gas and not wood, and that the leavening in the dough is plain old-fashioned yeast, rather than a forty year-old sourdough starter. I would note that the oven is still a Stefano Ferrara, so very much zenith-level, and that the result chef Ben Griffiths-Hardman is getting from his slow-proven dough is truly impressive. Light, pliable, digestible with a touch of smoky char from the oven: first order stuff. 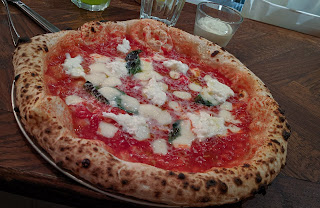 We tried a Margherita, because you have to these days. The tomato sauce was clean and sweet. I know this sounds like damnation by way of faint praise, but honestly, there is something about the finest San Marzano tomato sauces that reminds me of the red stuff that spaghetti hoops come swimming in. This sauce was very good indeed. The buffalo mozzarella was barely molten, a few flecks of pecorino providing some seasoning. Truly, a fine pizza. 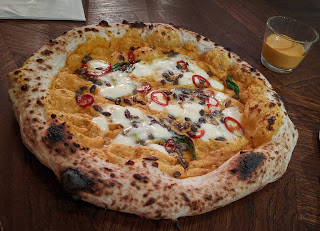 We also went for a less canonical number and were rewarded with a frankly delicious concoction of pumpkin cream and seeds, pickled chilli and gorgonzola. Griffiths-Hardman’s experience as a chef for 21 Group and over-the-road Stark’s Kitchen is apparent; he knows how to put flavours together. This was a minor sensation. You don’t strictly need it, as the crusts are fine as they are, but there are flavoured mayos you can get for dunking. I heartily recommend the nduja one. 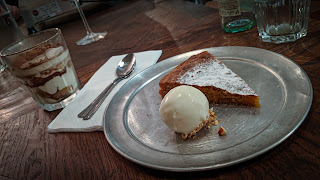 We politely enquired as to whether they did puddings, and were enthusiastically advised in the affirmative. And lordy, do they ever. Their tiramisu was banging, a glass full of creamy, caffeinated delirium, with just a whisper of orange running through it. Splash of Cointreau in there? Something like that. Mrs Diner annihilated the thing, while I was diverted by a righteous slab of frangipane tart which came with some unusually delicious - homemade - ice cream.

There were a bunch of snacks and pizzas that sounded great that we didn’t get to try, but we’ll be back alright. Having a superior product is half the battle, but only half; you also need to understand what the experience of being in your place is going to be like for people, because that’s what they’ll remember. On that metric, Flint has got it absolutely nailed.

There are only about 18 covers, and 10 of those are at the bar. Those, if you ask me, are the box seats. There’s something reassuring and slightly hypnotic about watching your order being put together by people with such skill and enthusiasm. We enjoyed this meal so much that we were happy to leave; I was excited for the people patiently waiting for our seats as I knew what a treat they were in for. Apparently at busy times you might have to wait something like 20 minutes. Worth it; worth it by miles.