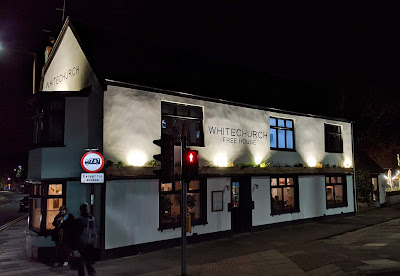 There seems to be a bit of an imperative for new restaurant businesses to be able to offer something at all times of the day. If you have the staff, the kit and the premises to pull it off then it makes a lot of sense. Rent and rates need paying whether the doors are open or not; might as well make money from the brunchy crowd as well as those in the market for a nice dinner. Somebody dropping in for a coffee might come back next week for their birthday dinner, and so on and so forth.

Whitechurch in Durham seem to have this concept nailed. They’re open from 08:30 until late most days. The team behind the excellent Flat White Cafe turned have turned what was an uninspiring pub into pretty much all things to all people. 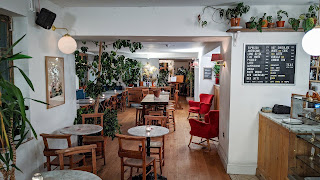 It’s a café with excellent looking cakes in the cabinets. It’s a brunch spot with bacon sarnies, avo on toast and all that jazz. There’s outside seating, real ale, an interesting wine list, a bar to perch at and the Sunday lunches look pretty banging. 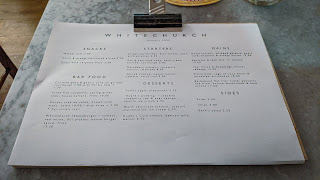 Oh, and in the evening they serve dinner, which is what brought Mrs Diner and I down the A1 on a rather dingy evening, hoping to punctuate the gloom of winter with a little culinary cheer. 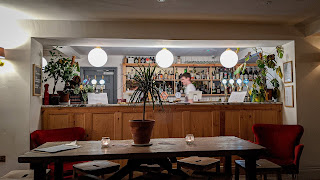 We found a building of calming whitewashed walls, wooden floors, low-slung ceilings and significant quantities of plant life. It’s a simple formula that would work as much during the day as it did by the flicker of candlelit evening. I like whitewashed walls. Things look good against them. They make me think of Greek Islands and the restaurant St John in London, and of uncluttered simplicity. Indeed, uncluttered simplicity would be a good way of describing the dinner we had, but I imagine you’ll want a bit more detail than that, so I’ll crack on. 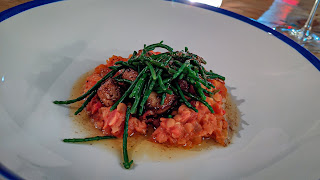 My scallop starter featured dinky queen specimens rather than the hulking king variety. They came well seared but not overcooked, perching on an excellent tomatoey dhal in a pool of spiced butter, draped in samphire for crunch and salty tang. This was a lovely starter, the scallops having good sweet flavour, the seasoning of the dhal pretty much spot on. 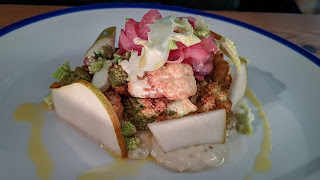 The advertised crispness of the cauliflower on Mrs Diner’s starter was derived from it being more or less raw rather than being, say, deep fried. This minor quibble aside, it was part of a straightforward but very enjoyable salad that also called upon the talents of a funkily delicious blue cheese salad and some bracingly pickled onions, as well as some slices of raw pear. The cauliflower used was Romanesco, rather than the standard white variety, which doesn’t necessarily taste any better, but does look very pretty on the plate. 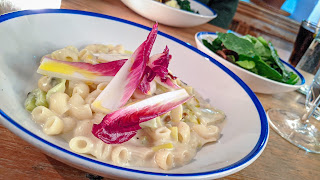 My inner cheese-deviant insisted that I order a main course of Epoisses mac ‘n’ cheese. In case you aren’t familiar with that particular Burgundian fromage, it’s very much top-tier stuff, both in terms of flavour and pungency. It made for a rather magnificent dish of silkily cheesy pasta, with some lightly cooked leeks and red chicory providing enough bitterness to prevent the whole thing becoming overwhelming. I’m not convinced this wouldn’t work better as a side dish rather than a main, but hey ho, it was still quite something, which is more than can be said for “Beth’s salad” which comprised just some dull undressed leaves. The mark-up is strong on this one. 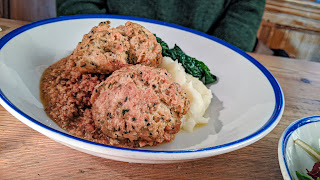 In happier news, Mrs Diner’s veal mince and dumplings was a work of unassuming nostalgic genius. The mince was lighter than regular beef, yet absolutely packed with flavour. Technique and time had been well spent transforming the raw product into something utterly delicious, but even this fine, upstanding slurry was upstaged by dumplings which were crisp, herby, stodgy and lightness all at once. There’s no such thing as perfect, but if there were then these were that. Fabulous.

Service was young, cheery and very well clued up. I’m assuming that most of the staff are studying at Durham University. We were however a tiny bit abandoned a couple of times, once in the bar while waiting for our table and again after ordering dessert. 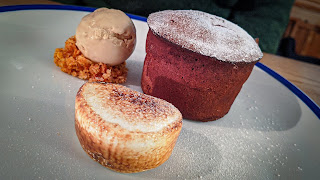 It turned out that the latter instance was due to the chocolate fondant Mrs Diner ordered having met a disastrous fate on removal from its mould, requiring the cooking of a second. When it did arrive it was perfectly cooked, even if the chocolate flavour was a little meek. 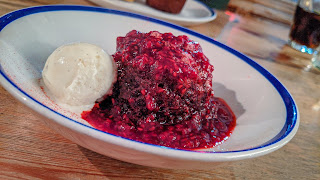 No such complaints in regards to my ‘Guard’s pudding’, a wonderfully warming steamed suet sponge, smothered in lashings of raspberry jam and served with decent vanilla ice cream. This dish is apparently so named as it was served to the guards at St James Palace. Lucky them. 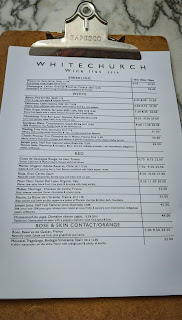 The wine list offered some interest by the glass. An organic Catterato was all zippiness and luscious stone fruit, while a low-intervention Australian Chardonnay had some interesting banana-yeasty notes. 11 options by the glass with vintages displayed. Hurrah. Including those two glasses, some soft drinks and service, dinner came in at ninety pounds. Very reasonable.

I’ve no reason to believe that Whitechurch isn't just as competent at other times of the day. It feels like an extremely assured operation. We left the place all loaded up with the bonhomie that comes from excellent cooking, especially of such traditional dishes as mince and dumplings and steamed pudding. I mean, who doesn’t want to eat mince and dumplings and steamed pudding? In February in Durham? No-one.