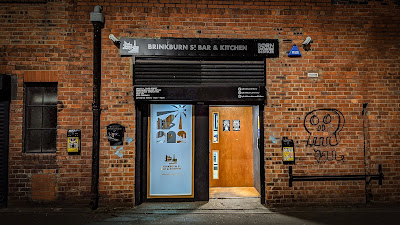 Have we reached peak craft beer yet? Such is the hectic and exponential proliferation of flavour-forward fermentation that I’m finding it hard to keep tabs on Who’s Who among North East brewers. Not that I’m complaining, you understand. The choice of pint - or two-thirds, or whatever - in a decent pub is so far in advance of the state of things ten or fifteen years ago as to be unrecognisable. And, for those of us who like our imbibing to come with a side order of narrative integrity, that pub is ever more likely to be the tap room of the very brewery who made the stuff in the first place.


So it was that we spent the better part of one evening in two breweries in the East End of Newcastle. I’ll get to Brinkburn - where we also had a bunch of nice things to eat - in a minute, but first a doff of the cap to the place where we finished up, namely Full Circle Brew Co in Hoult’s Yard. We arrived well refreshed, so were perhaps easy to impress, but nonetheless: flipping hell. The place is warehouse-mahoosive. You can peer down from a gantry at the vast fermenting tanks, standing silently to attention like benevolent alien intruders, eerily shiny and beautifully lit in neon-like stripes. There’s some serious dosh behind this enterprise.

The tap-room is a lovely space too, industrial yet comfy, with windows looking down to all that kit below. I tried Looper, from their core range, and it’s cracking stuff, a hazy IPA with enough sherbetty grapefruit and lemon to make it bracing and moreish, but not so much that it ends up tasting like Lilt, which is an occupational hazard for juicy IPAs. And then the taxi arrived, we drank up, and that was that. We’ll be back, not least because Scream for Pizza are currently doing the food.

Some time earlier, Mrs Diner and I had arrived at Brinkburn St Brewery in Ouseburn, quite sober, to meet friends and kick off an enjoyable evening by working through a menu that had caught my attention previously. Brinkburn have been open on this site, just round the back of Kiln, since around August 2018. It doesn’t look like an awful lot from the outside, but through the door and down some stairs and you’re in a large but tremendously cosy bar and restaurant space. 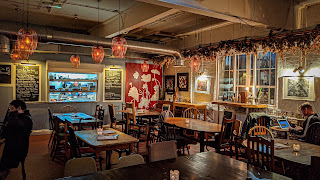 Exposed air ducts, painted bare bricks, mismatched wooden furniture, a bar that seemed to be a lump of solid concrete, fairy lights, a games room full of bagatelle boards; there’s a lot going on but you’ll feel immediately at home, not least because the staff are friendliness itself. The building has some history and bags of character, having been the Maling Pottery factory between 1814 and 1853 and featuring a tunnel somewhere near the bar. Two-thirds (yeah I’m down with modern boozing trends, innit) of Hop Gremlin in hand and Friday evening was off to a flyer. 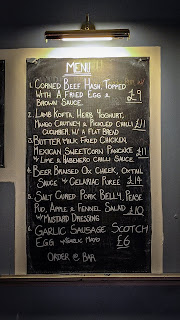 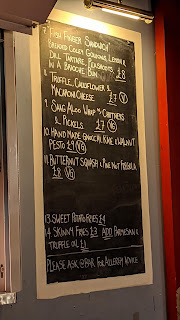 The menu comprises a couple of chalkboards, one either side of the kitchen hatch and consists of things that I’m sure would sound lovely at any time, but especially so in that Goldilocks zone of hunger I always find myself in after precisely one and a half pints. 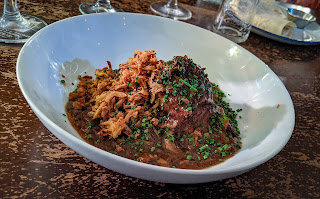 My beer-braised ox cheek and oxtail sauce was a triumph of patience, its slow cooking having rendered it an umami-packed tangle of bovine fun. Celeriac purée had a top note that worked well against the main act, while some crisp fried onions prevented the whole thing being just baby food for grown-ups. Not a vast bowl of stew for fourteen quid, but a seriously good one. 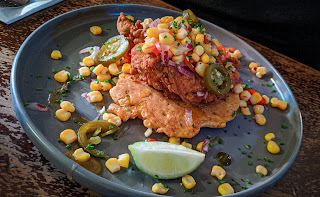 Elsewhere were zhuzhed-up versions of takeaway staples. Mrs Diner’s fried chicken came not in a sweaty cardboard box, but perched on a rather good sweetcorn pancake. The bird, tender from its buttermilk bath, had decent crunch and was perked up by a pretty zingy habanero and lime sauce. Grease plus spice plus acid will always stand a chance. 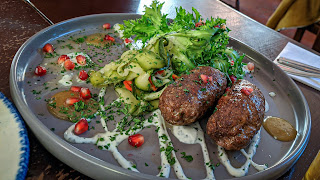 Their lamb kofta was a significant upgrade on your standard post-booze kebab. Two juicy wodges of tightly pressed mince were given a lift from mint, and some lightness from a yoghurt sauce, some pickled cucumbers and a scatter of ruby pomegranate seeds. Nothing remarkable, just things that go well together, nicely cooked and sensibly assembled. 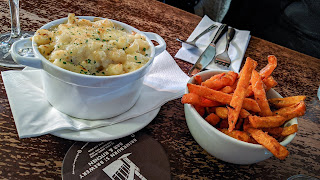 Sides were good. Sweet potato fries were sufficiently crisp, and the mac and cheese adequately gooey for both to be well worth the calories. A pattern was beginning to emerge: food, either involving beer in the recipe, or that went well with beer, or both. 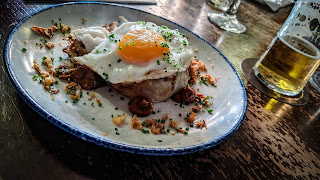 Case in point: a corned beef hash with fried egg and brown sauce. None of those words are especially noteworthy in and of themselves, but together they become gentle and unassuming poetry.

There was no way we were going to manage pudding this time around, but from the evidence garnered during the brief previous visit, we’d have enjoyed them if we had. I finished a pint of the excellently named Tygers of Pantang (named for a Whitley Bay-based metal band, don't you know) and we tottered off towards other breweries, different beers and more fun. I think tap-rooms might be my idea of a good night out now, and it’s fantastic that, between Ouseburn and Hoult’s yard, you can spend an evening bouncing from one to another.

The menu offered by head chef Gareth Baty at Brinkburn is not so much starters and mains, but more just dishes and sides. Plates are constructed in a way that they can genuinely be shared. If that’s not your thing, one dish and a side will cost in the region of fifteen quid and feed you well. The food here is not going to change the world, but I don’t know that I would want it to. It does its job competently and with minimal fuss. Baty is putting up tasty dishes that go excellently with beer and will make an evening with friends go off very nicely indeed. Which, in a brewery, makes a tremendous amount of sense.