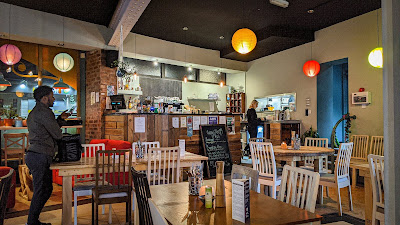 I’ve started viewing vegan meals as a sort of mental preparation for the time when we all are forced, by choice or peer pressure to eat this way. That time is probably here already really, it’s just that the majority of us who are still partly subsisting on things that once mooed, clucked or bleated are doing our best to delude ourselves. I know I am. On the one hand, I do bloody love steak. On the other, I saw a map recently which made it quite clear that should global temperatures rise 4 degrees above pre-industrial levels, my house will be underwater. Maybe by then Elon Musk or one of those other tech guys or girls will have invented wearable gills? Here’s hoping.


Just In case he doesn’t, it is at least cheering to find more and more good vegan food on offer in the North East. For far too long I looked at vegetarian and vegan restaurants askance, with a trepidation borne at least partly out of experience rather than mere prejudice. I’ve had my fair share of dull and unimaginative plant-based meals, in which the absence of death, rather than any focus on, you know, actual taste, was apparently sufficient justification for their existence. 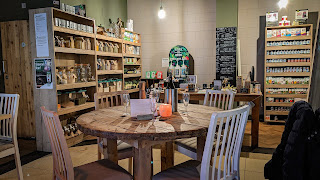 Little Green Social in Sandyford is the latest vegan meal I’ve had where the cooking was good enough to make the lack of meat a non-issue. A focus on punchy flavours and a lack of meat-replacements helped; I am yet to give praise at the temple of seitan. I look forward to the day when this sort of meal becomes so unremarkable as not to justify my opening the review by prattling on about it being vegan at all. We’re getting there. 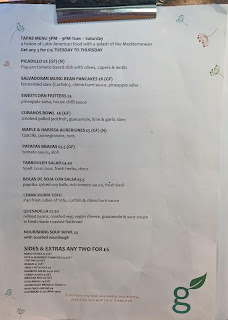 Little Green Social is an interesting business, taking up a few numbers on Goldspink Lane. In addition to the café, they have an ethical store selling all manner of foods, supplements and cosmetics, and there are occasional consultations run on-site by nutritionist Gareth Zeal, who is apparently quite a well-known national nutritional zealot. Mrs Diner and I left that for some other time, and also declined to purchase any CBD oil, but did take them up on their very reasonable offer of 3 tapas for £14. 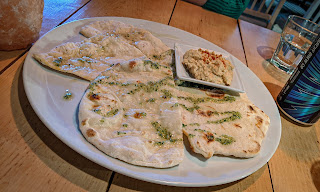 Things got off to a good start. Nice, tearable flatbreads came with unspectacular hummus, but were drizzled in a thumpingly good garlic oil. 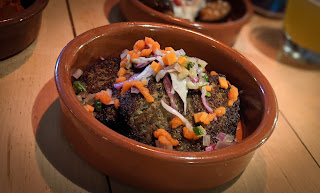 I’m fairly certain I had never up to this point eaten a mung bean pancake, much less a Salvadoran one, so my analysis of that dish will eschew any evaluation of its authenticity. It was, however, jolly nice, orbs of squidgy inside/ crispy outside vegetal matter with a pleasant savoury funk, seasoned nicely and served with some tangy fermented slaw. 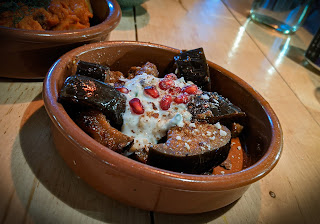 Maple and harissa aubergines were another winner, cooked down to the point of near collapse, sweetness and spice in abundance, and with a dod of non-dairy tzatziki to calm it all down. 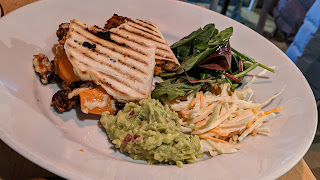 A quesadilla of refried beans and roasted vegetables was hewn from the same decent flatbread that had borne an earlier garlicky cargo, and was very tasty indeed. One of these would make a cracking lunch. I didn’t notice the vegan cheese inside, which may have been a good thing. Once Impossible Foods have perfected their burger, they need to figure out how to make vegan cheese that isn’t disgusting. I’m yet to sample any.

There are good beers available in bottle format from Anarchy Brew Co, most of whose offering is vegan-friendly. I availed myself of one of those, while Mrs Diner went for a chocolate orange smoothie, made with almond milk. It tasted of health, but was also quite nice. Weird. 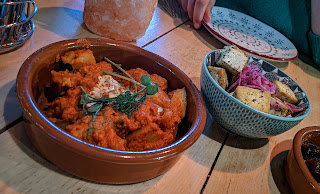 Just as I was mentally sketching out a double thumbs-up review, the food took a turn for the average. Patatas bravas were a bit half-arsed, tasting like something you’d be polite about if fed at a well-meaning friends house. Stodgy pellets of spud were slathered in a rather dull tomato sauce without enough spice or smoked paprika to make them fun. Elsewhere, cubes of firm tofu had not been crisped up, which would have given them some much needed textural contrast, while the advertised chimichurri was barely detectable, if present at all. 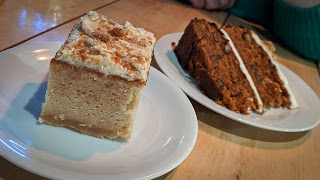 We allowed ourselves to be up-sold a couple of wodges of cake from the chiller cabinet to finish off with by a completely lovely waitress. Both wait and kitchen staff seemed the very model of positivity and industriousness. It must be all the nutrient-dense vegan food they’re eating. How I envy their gut biomes. I don’t especially envy their recipes for either carrot or salted caramel cake, however. Both were on the dry, stodgy side, with too much crumb and not enough of the fun bits.

In the end, this was merely a nice midweek dinner, rather than the excellent one it initially threatened to be. However, I do really like the fact that the very existence of places like Little Green, where plants are turned into tasty things, is becoming less remarkable. I liked the plain brick and high, darkly painted ceilings; I love that you can bring your own container and pay for various cosmetics and dried foods by weight; I’m yet to be convinced that CBD oil is something I need in my life, but hey ho.

Order wisely and you will eat pretty well here. As you, and I probably should, before the world turns completely to dust and ash and we talk fondly of the good old days, when we still had mung beans to chew on.