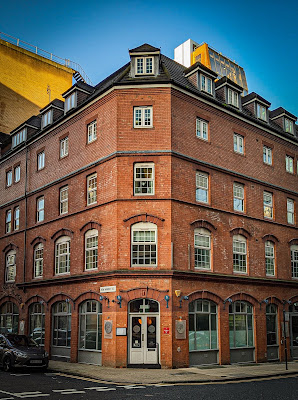 
The Michelin Guide has an interesting place in the modern British culinary picture. It is on the one hand sniffed at and derided for being out of touch, or for making awards and deletions that are hard to understand. How can Sketch in London get a third star this year when the classical brilliance of (South Shields’ own!) John Williams at the Ritz sports but one? Whatever did Castle Terrace in Edinburgh do wrong to lose theirs a couple of years back? And, more locally, why was a restaurant cooking at the stratospheric levels of Hjem overlooked for a star last year?

And yet, in these hectic and cynical times, the guide retains a couple of killer apps: heritage and anonymity. It’s been around in some form for well over a century, and - unless your maître d'hôtel is a real pro - you won’t know when you’re being inspected. So it is that, for all its faults, when heading for unfamiliar territory I’ll still fire up the Michelin website, among a few others, to see what’s what. 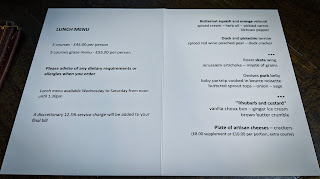 Meeting relatives in Birmingham who weren’t due in town until late provided an excuse for a fancy lunch. Not that I ever really need an excuse for a fancy lunch, but still: we had one if we'd needed it. Of the four one-star restaurants in and around central Birmingham, Mrs Diner and I decided to head to Purnell’s on account of the eponymous chef patron Glynn, a familiar TV face and Brummie institution; his place has held a star for ten years and counting. 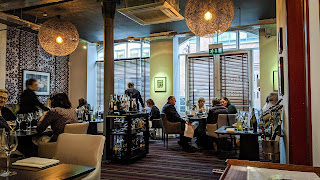 Set in a handsome red brick townhouse, the dining room at Purnell’s feels modern and retro all at once. None of your solemn, muted palette here; the carpet was stripes of purples and cream, while the banquette Mrs Diner settled in was covered in a paisley pattern that reminded me of a shirt I grudgingly admitted was passé decades ago. Tables were uncovered black wood that made taking pictures a bit tricky, while the lampshades looked like they had been constructed from petrified elastic bands. I wouldn’t want to live here, but it was a fun spot to spend a couple of hours. 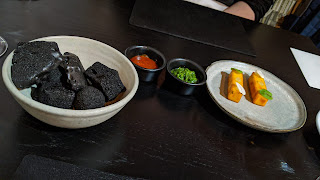 The fun continued with the snacks that preceded our 5-course lunch tasting menu. What looked like blocks of black construction foam turned out to be squid ink meringues. Eating them turned us temporarily into a pair of goths. I preferred some very fancy chips whose innards seemed magically to contain cheese. They came with pokey spiced tomato, and parsley and coriander dips. 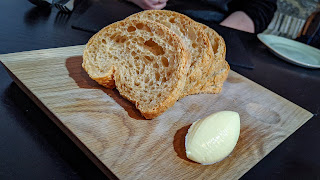 What then arrived, after some quite stellar sourdough, was a series of dishes that sacked off gimmicks and lolz in favour of very, very solid technique, consistently delivering on flavour. 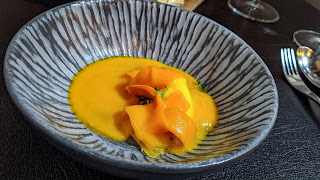 A velouté of butternut squash, for example, got an awful lot of depth out of that rather ubiquitous cucurbit, with the flavour of orange playing the top notes and a spiced cream bringing tang and richness. 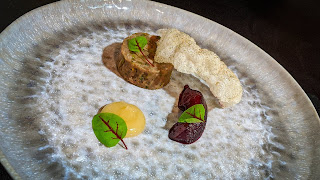 If this was a good soup, then the following terrine of duck and pistachio was completely superb, packing huge amounts of flavour and richness into a rather unprepossessing disc. I suspected the use of foie gras. A duck-flavoured quaver thingy and a nifty slice of poached pear that had refreshing raw crunch to it, yet was wine-crimson all the way through, were fine accoutrements.

As tempted as we had been to take advantage of their Coravin system by trying a glass of Romanee Conti for £350, we eventually drank rather more modestly, although still very well. Jean-Marc Brocard’s Chablis 1er Cru was a zippy, minerally rebuttal to anyone who thinks they don’t like Chardonnay, while a Puglian Negroamaro from producer San Marzano was a gloriously hefty beast, full of cherry jam. 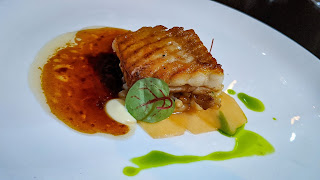 Back to the food, and both of the next two courses featured seriously good sauces. The glutton in me enjoyed the fact that having poured the lotions over the dishes, the remainder was left in front of us in dinky jugs. The chicken sauce that came with a butter-basted skate wing was like concentrated Sunday dinner; wonderful stuff. That dish came with pickled mandolined slices of Jerusalem artichoke, which was a clever way of getting some acidity onto the plate. A brined and roasted cuboid of pork belly came sporting a thin layer of rather polite crackling over gloriously delicious fat. An onion purée had impressive depth of flavour, while some sprout tops contributed a little green freshness. But the sauce that napped the whole business: oh my days.

It was reassuring, while devouring all this, to turn occasionally and see Purnell himself at the pass, leading a young-looking brigade of serious grafters. If your name is over the door, you ought really to be on the premises where possible, I think. Fair play to him. 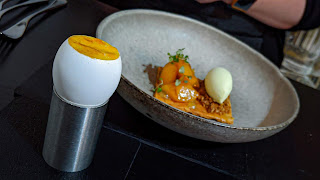 I asked to try from the a la carte the fancy burnt cream served in an eggshell with which Purnell scored top marks on the Great British Menu way back when. We actually found this the least impressive dish of the day; full marks for neat work on the egg shell, but what was inside was a merely nice crème brûlée, with not quite enough of the crispy bit on top for my liking. Some accompanying baked apple on pastry also failed to set our world on fire. 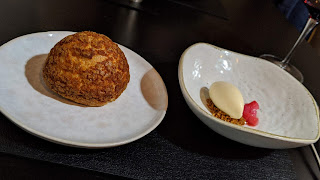 We preferred the rhubarb and custard from the lunch menu, in which a wonderfully light choux bun was filled with a vanilla cream, with some fiery ginger-poached rhubarb on the side.

Service, other than a couple of tiny slips, was immaculate, yet welcoming and personable. Water was topped up, dishes explained, and that fancy pud turned up at no extra cost, which was nice of them. 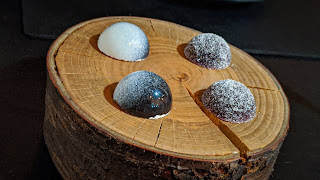 After seeing the decor and snacks, and knowing Purnell’s reputation for having a sense of humour, I think I expected a little bit more tongue-in-cheekiness. What we in fact got was a hugely enjoyable, if not terribly revolutionary lunch of dishes based on good ingredients and very sound technique. And there is certainly nothing wrong with that.

They say that to get, and stay, in the little red book, consistency is the key. This was one of the most consistently slick, tasty meals I’ve had for some time. I suspect it'll be there for quite a while.